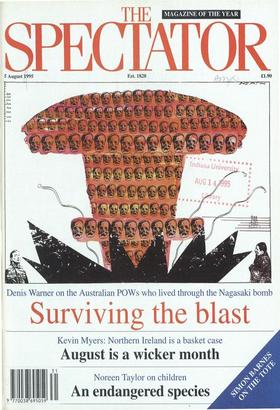 Film of an alien that visited Earth will be shown on television M r Michael Portillo, the Secretary of State for Defence, flew to Washington and pleaded for the United States...

If Dudley Fishburn wants power, he should consider a career as a Eurocrat BORIS JOHNSON D udley Fishburn used to be Harvard's representative in London, and agreed to interview...

IAN JACK I 'm watching a particularly exciting moment of the Old Trafford Test when the phone rings. A voice from the past, from Delhi, one Bhaskar Battacharya, some- times...

Two studies in our own forms of hypocrisy AUBERON WAUGH H ypocrisy was generally held to be a fault of bourgeois society. The preaching of high standards could not always be...

'SUDDENLY, THERE WAS A TERRIFIC RUSH OF AIR'

A few months after the atom bomb was dropped on Nagasaki, Denis Warner met 24 Australians who had lived through it. All but six are still alive, and still remember what...

At a veterans' meeting in Rhode Island Ian Katz finds Americans in denial about the bomb Cranston, Rhode Island A FEW of them had their badge-encrusted garrison caps on back...

persist. . . THESE DAYS, like nearly all my patients, I'm tired and lack energy. In fact, I go to bed tired and wake up exhausted. Occasionally, of course, I have some slight...

John Simpson deplores the Chinese government's attempt to discredit the dissident Harry Wu WHEN THE grey, grainy video begins, it takes you a moment to realise what is hap-...

FROM THE crowding multitude of reflections which the election-and-all- that excites it is hard to sort out the two or three that seem to predominate. But about the first there...

THE SQUINTING OGRES OF AUGUST

THE LAMBETH OF THE NORTH

Barry Wood investigates corruption and mismanagement in another Labour council Ashton-under-Lyne FROM A distance, it looks like just one of the many companies that fell victim...

THOSE publicity-seeking fellows from Oxford have sent me the new edition of The Concise Oxford Dictionary to read. I am pleased to note that it is edited by a woman. I haven't...

A LOSS OF FREEDOM

Noreen Taylor believes that the deaths of three more children will help bury the culture of childhood forever I REMEMBER when children used to play in our city streets. I...

Being English is getting a lot of laughs when others would merely see oddness verging on lunacy PAUL JOHNSON T he Chief Inspector wants state schools to give pupils a sense of...

Change for the better

Sir: Dorothy Byrne's experiences in Japan, as recorded in her article (`This is your tor- turer', 29 July) and her splendid television film on 27 July are far from unique....

Sir: My attention has been drawn to last week's issue

of your journal and, in particu- lar, to the article by Alasdair Palmer. Sir James Mislcin and your home affairs editor would be better dealing with facts and not posturing,...

Sir: I must congratulate you on Alasdair Palmer's article on the cruel unaccountabil- ity of doctors (Now then, what seems to be the trouble?', 29 July). My husband died of...

Sir: I was interested to read Alasdair Palmer's article about

doctors not shopping one another to the GMC. In fact, the GMC these days, believe it or not, is mainly con- cerned with medical standards; in 1994, out of 84 cases considered by...

Nowhere to be seen

Sir: A month or so ago an attempt to scut- tle a disused oil rig was frustrated by that well-known but nevertheless somewhat shadowy organisation, Greenpeace, amidst much media...

Sir: In his article (Food, 8 July), Digby Anderson says, 'Bass with boiled potatoes and mangetouts . . . is disgusting.' And, 'Never serve meat or fish and vegetables.' Such...

Sir: Tald's honking Greeks (High life, 27 May) brings back a delightful memory. Some years ago, I was walking along a deserted road on Mount Hymettus — 'The Japanese have got a...

Sir: I heartily agree with Digby Anderson's article on food.

For decades now, it has been the practice of restaurateurs in the United Kingdom to push their clients into ordering vegetables with the main course, in order to inflate the...

Sir: Wouldn't it be nice if Dot Wordsworth were to desist from making disparaging remarks about 'dull old Fowler' (Mind your language, 22 July)? I still have the copy of...

Sir: I rather enjoyed the slice of his spleen that Robin Harris served up as a review of The Five Giants (Books, 29 July), even if it was a little like asking Herod to review a...

London has become, however briefly, a city of the open air SIMON JENKINS L ondon this week has been like Ran- goon before the monsoon. The Great Wen has been suppurating for a...

God for Harry, England and St George! Peter J. M. Wayne All reflecting men will welcome the bicentenary of Henry Purcell's death as an opportunity of making known to the...

Two heroes at war with the Mafia

Byron Rogers ONE MOONLIT NIGHT by Caradog Prichard Canongate, 18.99, pp. 192 T he publishing history of this book is an odyssey which may be of interest to those Englishmen who...

Prophet of the soul

The war photographer as hero

Michael Hulse HIGHWAYS TO A WAR by Christopher J. Koch Heinemann, £14.99, pp. 451 0 f all the Vietnam war photographers, Tim Page seemed the most in love with killing and...

Lie quiet, uneasy one, and say your prayers. Renounce these words, the spawn of vanity which come each day to haul you from your rest. Forebear to violate the tender morning...

Taking the tosh out of Toshie

Land of the loved one Rupert Christiansen is moved by the jewels and treasures of Hollywood A fter religiously spending a day tour- ing LA's great trinity of art galleries —...

The Englishman Who Went Up A Hill and Came Down A Mountain ('PG', selected cinemas) Urn, are you in, er, love? Mark Steyn O ne swallow doesn't make a summer — despite the...

What are old• crocks? Ursula Buchan T ank goodness, I do not write about bridge. Or chess. 'He won East's heart return, drew the remaining trumps and ruffed both his losing...

Owning up to Aids Nigella Lawson J ohn Campbell is offended. Mark Easton, reporting for Public Eye's Sex in the Dark programme (BBC2, Tuesday 8 p.m.), has put it to him that,...

Living in the clouds Alan Judd he vogue (no pun intended) for four- wheel-drive vehicles is the sort of consumer behaviour it would be worth millions to predict. Few people...

Family sagas Taki I have been here before,' says Charles to Hooper at the beginning of Brideshead Revisited, and so he had. These are Brideshead-type days, with a cloudless...

The perfect farewell Jeffrey Bernard I t was sad enough to go to Michael Andrews's funeral to say goodbye to such a good and such a gifted old friend, but a couple of drinks...

Gorgeous long white legs Carole Morin A n outrageous letter from my bank advised me, 'You can use money for virtu- ally anything and we make it very easy to arrange the money...

Holiday of a lifetime Nigel Nicolson A SS Orpheus, Crete 1 the cruises in the Mediterranean, such as the Swan Hellenic cruise on which I embarked a week ago, are based on the...

Gambling Andrew Robson HISTORICALLY, an opening bid of 3NT showed a balanced hand with 25 or 26 points. This is a rare hand and it is best opened 2+ (which shows any hand with...

LJL JUST OCCASIONALLY, the brilliant political and economic columnists who grace the front pages of The Spectator need a little help from us trivialists at the rear. It was...

URA I ISLE OF MT SCOTCH %HMI COMPETITION Saith the preacher Jaspistos EN COMYE 11110N NO. 1892 you were invited to supply a text and an extract from a sermon worthy of...

Death of a gambit Raymond Keene ONE OF THE BIG QUESTIONS for the forthcoming Kasparov v. Anand World Championship match in New York is: will Anand allow the Evans Gambit and,...

A first prize of £25 and a bottle of Graham's Late Bottled Vintage 1988 Port for the first correct solution opened on 21 August, with two runners-up prizes of £15 (or, for UK...

Dear Mary. . . Q. As a well-to-do mid-30s bachelor, gen- erosity comes easily to me (and honesty!). Dining out with married or partnered friends, I am happy, therefore, to...

Wyatt's Error Simon Barnes REMEMBER the ancient television series The Prisoner? It was a programme full of hybrid vigour, a cross between Kaflca and The Man from UN.C.L.E. It...