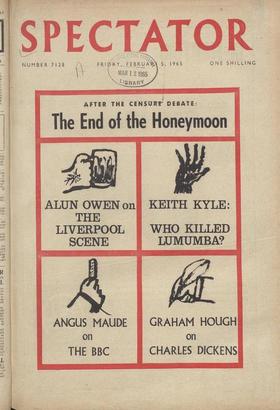 AFTER THE CENSUR - E 2 DEBATE:

I- OLITICS have started again. Mr. R. A. Butler has left the House of Commons and Mr. Buxton (Con., Leyton) has arrived. The Hundred Days have come and gone, and with it the...

SIR WINSTON CliURCIIILL passed into history, when world leaders gathered to attend the first state funeral for a commoner since that for Welling- ton in 1852. President de...

R. A. CLINE writes: If you chose to spend a morning in one of the magistrates' courts, you would have a fair chance of witnessing a scene peculiar to the English criminal...

P. J. HONEY writes : Major changes in Soviet policy towards Vietnam have taken place almost unnoticed over the past two months. Mr. Khrushchev made it abundantly clear to Mr....

Homes and Slums A MID the high feelings over mortgage rates and the inadequacies of the building in- dustry (as attacked on Wednesday in a formid- able report in Which?)...

OUR MOSCOW CORRESPONDENT writes: On February 2 Russia and India celebrated the tenth anniversary of Indo-Soviet eco- nomic co-operation. It has been a momentous decade for both...

The Tear-jerkers By CHRISTOPHER BOOKER A last, bowed under by years of anticipation, a week of waiting for the death and yet another week dragging out towards the funeral,...

Lessons From The House WATKINS By ALAN D EBATES that have been billed in advance as great parliamentary occasions nearly always turn out to be disappointments and Tues- day's...

If by dialling 'H-E-L-P' from any phone box, a citizen could get through to an operator . . . --The Postmaster - General. Brek-ke-kek-kek-koax-koax, Hark to the Aristophanical...

By KEITH KYLE T ilt. difference between all other Congolese „_ oppositions-in-arms and the present one is that Gbenye's rebels. demand the political pro- 4e rintion of...

Golden Age of the BBC

By ANGUS MAUDE, MP THERE days of radio and television, if only a certain nostalgia in reading of the HERE i early b ecause one did not then have to worry very match about the...

On Lobby Terms A harrowing picture of the conditions under

which parliamentary journalists work is pre- sented in Partners in Parliament, a report by twelve members of the press gallery. I read of the plight of the Exchange Telegraph,...

Tailpiece So many people have so many different ideas about

a suitable memorial for Sir Winston that I feel I should record a suggestion put to me on the steps of St. PAl's after the service. It is that, when the rebuilding is complete...

rTHERE has never been such a funeral service I before. There will never be again. It was splendid and solemn, but it was also glorious and triumphant. There was nothing here for...

Instant Government No one, I think, is a more acute

observer of contemporary British life than Mr. John Crosby, of the New York Herald-Tribune. Whether he comments on the dazzling plumage of Chelsea birds or what was really said...

The Liverpool Scene By ALUN OWEN 1 Vs a Liverpool pub and it's Saturday morning., IA long bar with a special clock, special because instead of having numbers around its face...

Hors Concours Several light-years ago I presented their trophies to

the Sportsman and Sportswoman of the Year—Gordon Pirie and Pat Smythe. No applications need be submitted for 1965. No pos- sible achievement could match my own per- formance in...

Take us to your Leader The National Opinion Poll has

received so many bouquets from me that it must not mind one brickbat. No, not about their Leyton fore- cast, although that was so far from the result that NOP have had to...

Within four days came the funeral service of Sir Winston, the memorial service to Lord Woolton, and the announcement of the retire- ment of Mr. R. A. Butler from party politics...

SIR,—I was pleased to read Ben Whitaker's review of Mary Grigg's significant book, The Challenor Case. The series of miscarriages of justice which may be euphemistically called...

Sta,—In his interesting summary of the aspects of the post

given to the new Tory chairman, Mr. Edward du Cann, lain Macleod thinks—apparently- that only some few former chairmen of the Tory Party (modestly excluding himself) ought to be...

The World of Susan Sontag Sta. Alan Brien, in his

article 'The World of Susan Sontag. at the January 22 issue of the Spectator, Makes an odd and erroneous assumption about me. Referring to a parody book review I wrote for the...

King Paul of the Hellenes

SIR,-1 am gathering material for a biography of the late King Paul of the Hellenes, and would be greatly obliged to any of your readers who may be able to help me concerning his...

St a.- Christopher Booker's reference to the Daily Telegraph's obituary of Sir Winston Churchill as 'scrappy' is puzzling. His single sentence quotation makes it clear that he...

sik._, am writing to protest at the review of Herzog in your issue of January 29. I freely admit that I have not read the book, but I think that you and your reviewer would...

Slit,—As far as I could understand it, we were told on the radio recently that the monthly weather fore- casts entailed the services of a team of twenty, and that about 50 per...

SIR,--The sort of reforms that Mr. Blenkinsop advocates would reduce still further the number of back-bench MPs with continuing first-hand experi- ence of the taking of...

SIR,—Mrs. Price's repeated accusations of cowardice against Randolph Vignc 'and his kidney' (Spectator correspondence, January 22) are all too sadly typical of the attitude of...

SIR,—While deeply sympathising with the victims of the recent Ceylon cyclone, having lived in the country and known Trincomalee, I find Professor Malalasekera's appeal for aid...

A YEAR'S SUBSCRIPTION to the 'Spectator'

Cleaning up the Thirties bit.orce Me. Darling. (Globe.)-- The Wayward Way. (Vaudeville.) ANDY Wit.SON's advance into the 1930s is mis- directed rather than entirely...

In Memoriam rr Eva Monday evening a gently wretched 1 Minnie Caldwell came out into Coronation Street and told Ena, 'I've been thinking of him.' This was typical of a week in...

By GRAHAM HOUGH T HE sheer quantity of work accomplished by the great Victorians is a standing cause of wonderment. Lionel Trilling once suggested that time must have been a...

THE extensive and detailed study of nine- teenth-century Irish history, which has been one of the most notable features of the past decade of historical research, has thrown...

Both Sides of the Hill

The Making of the Suez Canal. By John Mar- lowe. (Cresset, 35s.) The Arabs. By Anthony Nutting. (Hollis and Carter, 35s.) AFTER his somewhat disappointing book on the Persian...

By MICHAEL HAMBURGER T o review this book* is almost indecent, like giving a running commentary on the eruption of a volcano, from a safe distance. But even this excuse was...

LARGE sections of the western and northern regions of Czechoslovakia were partly or wholly German in character since the Middle Ages. Dr. Luza describes how they ceased to be...

'Wrrii hasty and stupendous strides, the giant form of virtuous Democracy continues to pro- gress over the length and breadth of the land.' The elation of the Northern Star in...

Past Time and the River

man, 25s.) . 130 not know much about gods; but I think the river is a strong brown god—sullen, untamed and intractable . , I may be forgiven, in a season which his death still...

In the split woods a broken sapling, Cold catkins that I stoop below. Explosion of a blackbird's wings Kicks up exclamatory snow. Silence, the burden of the song, Resumes where...

Advice to Mr. Callaghan By NICHOLAS DAVENPORT rr tits article is respectfully intended to per- suade Mr. Callaghan not to make a bloomer next April. The talk is that he feels...

By CUSTOS T HE improvement in the £ and the statement by the US Secretary of the Treasury, Mr. Douglas Dillon, that Britain seemed to have overcome her short-term financial...

Conspicuous Waist ? By LESLIE ADRIAN THE bi-annual ballyhoo of the international fash- ion 'collections' has just worn itself and its re:' porters out once again. Messieurs...

By STRIX Is it always an odd number of guns, and if so why? Nobody knew. I recalled, not very helpfully, a morning last April when HMNZS Royalist, a cruiser with the...

By ALAN BRIEN w some friend or relative of the teller who as present at the time. This article is 'an attempt to burn them out at the roots and provide space for new...