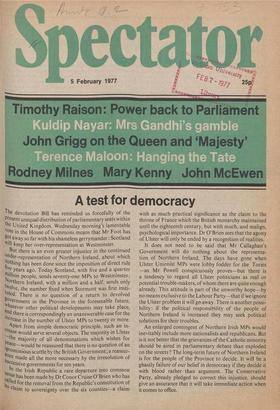 A test for democracy

The devolution Bill has reminded us forcefully of the Present unequal distribution of parliamentary seats within the United Kingdom. Wednesday morning's lamentable vote in the...

The ghost of civil war returned to Spain during the week. Emergency measures were declared by the government after three policemen were shot dead in Madrid. Hundreds of...

The unions and 'Bullock' John Grigg Royal commissions and committees of inquiry are normally set up either to buy time for the government of the day on an issue which it is...

Perhaps Jimmy Carter will not turn out to be quite as awful as some of us had feared. There has been an appropriate diffidence about some of his statements during the first...

Reflections on Enoch Auberon Waugh The earth has existed for about 4700 million Years. Our species has inhabited it for less than a ten-thousandth part of that time_ Possibly...

Richard Cecil Salisbury Three fundamental miscalculations by the British team lie behind the failure of the Rhodesian Settlement Conference at Geneva. First, Mr Richard from...

Kuldip Nayar New Delhi Ev en today, more than a fortnight after the 1.1 nouncement of fresh elections to the L °k Sabha, India's lower house of Parliaril ent, one question...

Restoring the power of Parliament

Timothy Raison We are all worried about the government of Britain, but we do not all have the same worries. Some believe that our greatest problem is what Lord Hai!sham calls...

Julian Critchley What should we do about the sale of arms? In 1975-6, Britain sold £500 million worth of arms, and this year we will push the value of our exports past £700...

Antonia Martin Come the referendum, the Welsh joke about the ambulance driver who couldn't drive but got the job because he was the only applicant to speak Welsh will have its...

Christopher Booker Of all the plethora of half-baked, subUtopian legislation which has poured on to the statute book in the past three years, two Acts have always stood out in...

Mary Kenny Like many housewives, I am addicted to the radio. As fish goes with chips and claret with roast beef, the radio goes with housework. Housework in itself so imbues...

Chance ball Hans Keller When you write all day and much of the night, as I did on my recent holiday in Lanzarote, the few hours when you don't assume special significance: far...

Weight for it Jeffrey Bernard Now that the Grand National weights have been published we horse followers and punters can look forward to eight weeks of conjecture, argument...

The amazing rush into gilts Nicholas Davenport Do you remember that the Bank of England got into a panic over sterling last autumn and hoisted Bank rate up from 13 per cent to...

Appeasement Sir: Your leading article Outside the law (22 January)

is surely inaccurate in stating that 'Under Mr Heath the Conservatives almost outdid Labour in their terrified r eluctance . . to bring them [the unions] Within the conspectus...

T he Archbishop I have read with amazement and disgust an

article by Auberon Waugh in your issue IS January entitled Secret, smouldering N iar red. He makes a most violent attack on • Coggan for a very Christian and kindly statement...

Rifkind in his letter (22 t iarY) follows the apparently accepted of anti-nationalists, that is to say, he ' h y oids any points or arguments made by c i ati onalists and then...

Sir: Mr Rifkind is wrong in claiming that the SNP

has misled the people of Scotland and the rest of the UK. As a whole the SNP has stayed firm on independence despite one or two people giving a false impression of the party....

Sir: Auberon Waugh takes time off in his latest column

(29 January) to sling mud at W. H. Smith Ltd. As a small provincial publisher I would like to say a few things in defence of this much maligned firm. I would have thought the...

upon the absence of the Spectator and the New Statesman from Smug's in Taunton. Their contempt for the intellect of the ordinary citizen reaches even greater heights here in...

H. McNeill's 'ignorance' of' Scottish constitutional history displays a sublime contempt about the truth of the past typical of Scottish Tories. To declare that the...

Don't really know what to say. Better say something or you won't print this letter. Let's think. Not as easy as it was. Old brain-box not working too well these days. Don't...

Black January Sir: As one who was quickly named by

my Arab friends in Jerusalem 'Abu Daoud' when my fourth child and first son, David, was born there in October 1949, I am inclined to agree with S. W. Aulsebrook (29 January) in...

Sir: What a betrayal of journalistic standards to have the editor of the old tabloid Daily Mail writing about the new tabloid Daily Express! Surely most of your readers aren't...

Sir: I hold no particular brief for the Daily Express

in either its previous or present form. But I wonder why you selected the editor of its chief rival to comment on it. As Mr English himself says, he is hardly an objective...

Cheek Sir: If Mr Lang wants to put his criticism

Sir: Mr Chatterjee (22 January) asks where is the ambiguity in his saying 'Hopefully, you will publish this letter.' It is not so much ambiguity that he engenders, but a...

Sir: In his review (The cat people, 1 January) George Gale makes, amongst others, the following statement: 'More rubbish has been written by otherwise intelligent men on the...

The making of a monarch John Grigg Majesty: Elizabeth II and the House of Windsor Robert Lacey (Hutchinson £5.45) Books about living celebrities may be good business for...

Room at the top

Peter Conrad Howard Hughes: The Hidden Years James Phelan (Collins 0.75) In our reduced and democratic age, the only heroes are nonentities: the moronic genius Warhol; Nixon,...

The best of everything

Benny Green The other day the Times Literary Supplement, in its anniversary edition, inaugurated a new parlour game, or at least reminded us of an old one, by asking various...

Christopher Hitchens The Greek Upheaval: Kings, Demagogues and Bayonets Taki Theodoracopulas (Stacey International £4.90) Athens, after the Ioannides coup of 1973, was the...

self set up the how-l-became-a-writer routine in an autobiographical article:

As a young child I wanted to be a writer because writers were rich and famous. They lounged around Singapore and Ran goon smoking opium in a yellow pongee silk suit. They...

Marxman Rodney Milnes 'Bohemia, shortly after the end of the Thir t y Years' War' is the setting of Der Freischa ' and the starting point of Gifitz Friedrich s new production...

Unofficial John McEwen Three years ago, there was a lot of publicity in the West for a show of underground Russian painting which took place on some wasteland in the outskirts...

Old recipes chard Ingrams L A rlY s neaking admiration for Mrs Whiteuse which I may have had was shattered a few weeks ago, she invoked some 'relent law of blasphemy against...