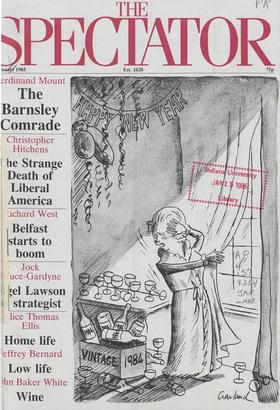 Portrait of the year

N ineteen eighty-four was marked by the 1 11 common disadvantage of furnishing too many materials for history, and until most of these are destroyed will have to go on being...

Waldenism T he last few days of the political year resembled the last few shopping days before Christmas. Ministers hurried out to buy something they had forgotten, attemp-...

Vor Indians everywhere the last three days of 1984 were markedly different to the rest of the year. At last something had happened about which they could rejoice; but there was...

W hatever defects Arthur Scargill may possess, laziness is not among them. He has devoted the utmost effort to lead- ing the present assault, begun by unconsti- tutional action...

A link with the Spectator's Gower Street days has been broken by the death of Mr E.T. Deacon, for many years the magazine's sales manager. He joined the staff when John St Loe...

A t last 1984 is over. Poor Orwell: he really did not deserve all the fuss about the year. As we now know, his book's title was entirely arbitrary and was achieved by...

In the trough Aubeion Waugh I n order to set the background to this piece, which is largely about those peo- ple whom the saintly Peregrine Wors- thorne has described as...

T am very pleased that the Government has given one million pounds to the Sudan to subsidise refugees, because the Sudan is one of my favourite African countries. It is a...

Christopher Hitchens Washington I n the foreword to his book The Strange Death of Liberal England, George Dangerfield wrote, to John Van Druten: 1 realise, of course, that the...

Bohdan Nahaylo I n a few months the Soviet Union will be celebrating the 40th anniversary of 'the victory over Fascism'. Preparations are already well under way for a...

The new Jingoism is just as unreason- able as the old, and far more dangerous. The idea of the Jingoes of 1874-79 was substantially that England, besides picking-up any wild...

Edward Theberton Tanzania W e went down to our regional capital last week. Fortunately, a break in the rains had made the road passable, at least to a Land-Rover. At the...

Richard West C hristmas brought to a climax an ever- growing financial bonanza in Northern Ireland, which is now inundated by shop- pers from over the border in the Republic of...

John Casey I t was the year of the Orwellians, rather than of Orwell. Dozens of articles, a conference in Cambridge, a whole issue of Encounter devoted to Orwell's thought, a...

Begging bowl economics Paul Johnson T he BBC's propaganda document sent out to buttress its case for an increase in the licence fee from £46 to £65 is a condescending and...

Strategist at work Jock Bruce-Gardyne W ith the Christmas turkey and his New Year resolutions CI must make friends with Peter Walker and be nice to Patrick Jenkin') tucked...

Rising damp N igel the captain and Robin the first mate are sitting in their boat, which is leaking. Robin's feet have got wet, but he cannot bale the boat out, because Nigel...

w hat should come floating through my letter-box, showing a touch of class to the gas bill, but a letter from United Consultants Securities of Amsterdam. 'Dear Investor,' writes...

m ay I be the first to wish City and Suburban readers a very happy ses- quicentenary of the Great Western Rail- way. That masterpiece on rails (and quite respectable investment)...

w hose life is it, anyway? Hambro Life, that is. Not the Hambros', whose bank backed it, made a fortune out of it, and might be thought to have given it their name. That name...

Sir: You state (Notes, 8 December) that the Common Council of the City of Lon- don is going to donate £10,000 to erect a statue to John Wilkes. It should be remem- bered that...

Sir: I know one ought not to kick a man when he has just gone down, but really poor rich Taki's failure (High Life, 15 December) to understand the Anglophone world depresses me....

Sir: Your tasteless wine column by Auso- nius (15 December) was worthy of the New Statesman at its worst. Desmond Albrow Tottyngton Cottage, Teddington

Sir: I am sorry to disappoint the publishers, but a

necessary prefix slipped out of my Johnson ruminations (Books, 15 Decem- ber). The sentence should have read that T. S. Wharton's book 'displays a vigour and originality to...

Sir: This generation's uncritical adulation of Samuel Johnson seems to have reached a new peak of frenzy on the occasion of his bicentenary. Is there not a danger that it will...

Sir: Sidney Vines's article (8 December) about the excommunication of two Angli- can women by the rector of their village church in Sussex was particularly inter- esting to me...

Dragos Oloieru Sir: The Romanian Service of Radio Free Europe has become, for desperate Roma- nians, a real Appeal Court to which, in the absence of any United Nations or...

Sir: May I endorse Mr Kirk's endorsement (Letters, 15 December) of Mr Almond's words concerning the desperate plight of the Spectator's political stance? Are we to suffer the...

Pillars of the press

Best and worst? It is easier to list the books that I am most likely to remember and those that I should most want to forget. In the first of these categories: 1) A Cruel...

More books of the year

A selection of the best and worst books of the year chosen by some of the Spectator's regular reviewers. Christopher Booker 1984 has been a memorable year for biographies,...

Most books about spying, special opera- tions, the secret world work much better as fiction than they do as fact. Colonel Z by Anthony Read and David Fisher (Hodder and...

Everyone has been telling me for years that I ought to read Les Caves du Vatican by Andre Gide. I did so this year for the first time and thought it was a complete dud....

No doubt thanks to my part-time involve- ment in the affairs of the Wallingford Bookshop (Mrs M. Ingrams Prop.) I have read a great many more new books than usual this year....

The best new novel I read during the year was Kingsley Amis's Stanley and the Women, the Master in his best form for several books: funny, sharp, intelligent and oddly moving. I...

Best book of the year to me was Barbara Pym's autobiography, A Very Private Eye, a revelation of a remarkable, and remark- ably nice, woman. I was glad to find that she had had...

No doubt a genuine Old Fogey should in this space be plugging the work of a younger specimen of that alleged genus, and it is true that, as a modest founding contributor to the...

I have read very little non-fiction this year but a great many entertaining novels. Out of these, Beryl Bainbridge's Watson's Apology gave me greatest pleasure. It is a...

Non-fiction best: honours equally divided between Hilary Spurling's Secrets of a Woman's Heart and T. S. Eliot by Peter Ackroyd. Dame Ivy told me that if she was ever to write...

The appearance of a new biography always raises my hopes, particularly if its subject is a writer, and it helps me to understand the genesis of a book that I have long admired....

Geoffrey of Monmouth's History of the Kings of Britain (Penguin) must be the best book of the year 1136. The kings start with Brutus, and go on to Lear, Cole (old), and Arthur....

Best books: The Road to Berlin by John Erickson completes his monumental work on the Red Army in the Second World War, based overwhelmingly upon Russian sources. It is flawed as...

A novel in which. I took a shame-faced delight was Stanley and the Women by Kingsley Amis, because of the deadly way it pins certain kinds of specifically female ghastliness. It...

I cannot possibly give any more puffs to this year's production by John Martin Robinson, so my best book of 1984 must be a late arrival, The Law Courts: The Architecture of...

As most people should admit, I tend to read new book reviews rather than new books. I have resolved next year actually to read a selection of works from the Martin Amis-Julian...

Michael Wharton's The Missing Will is the best autobiography I have read this year. He is one of the last bohemians. Graham Greene's Getting to Know the General has been accused...

Where's my momA? Alistair Hicks W here's my MOMA? Adults can and frequently do ignore this question, despite psychiatrists' assurances that the child's balance of mind can be...

Sensation Rodney Milnes Mazeppa (Coliseum) rr his one's going to give all you music 1 critics hernias,' a bright young opera producer said to me, with perhaps a shade too...

Deja entendu Noel Malcolm T spent Christmas high up in the Welsh in the loveliest house I know. There is no electricity there, and my host is unlikely to buy a television...

In season Alexander Chancellor This being the time of the year for 1 renewing old acquaintances, I renewed mine on Boxing Day with the Ewing family of Dallas. They are all...

Fuming Alice Thomas Ellis W hile Taki pays his debt to society his column lies empty, so my dear friend Jeffrey Bernard has persuaded the editor that I should fill it. I can't...

Taki would like to thank the very large number of

readers who have written to him at Pentonville. He regrets he is unable to reply to letters individually.

Down and out Jeffrey Bernard I t's nice to be able to welcome Alice Thomas Ellis aboard the Skylark or is it the Titanic? Anna, as she really is. runs one of the best lunch...

ah! business P J. Kavanagh T he beginning of a new year is a good time to think about changes and our attitude to them. If we dislike them it is difficult to know whether this...

No. 1353: Atalantics Set by Jaspistos: The metre and rhyme- scheme of a passage from Swinburne's Atalanta in Calydon were once adapted by E. C. Bentley thus: Let the milk that...

Jaspistos reports: Competitors were asked for an extract from an imaginary biography or memoir stressing the lighter side of some notoriously grave figure of the past. Engels...

Lift-off Raymond Keene I t is difficult to explain the explosion of chess strength which has taken place in England over the past decade or so. From being what might be termed...

Seventy-two-i years on T he first taste of wine is something not to be forgotten. Mine was on Christ- mas Day, 1912, when I was a little over ten years old. At the head of the...