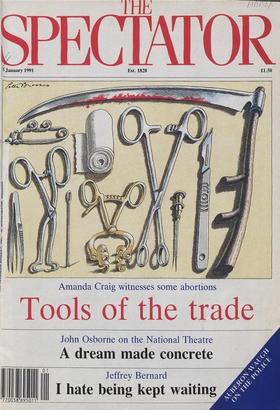 The march of time B ritish reservists with medical training were called up to serve in the Gulf. Tam Dalyell MP urged them to ignore call-up papers, and was accused by other MPs...

FREDERIC RAPHAEL D uring the autumn, travelling in Au- stralia, we began to suffer from biblio- penury; we ran out of paperbacks. Hotel kiosks offered a diet of Stephen King,...

Noel Malcolm is on holiday.

Should the police terror campaign be seen as a new anti-Popish plot? AUBERON WAUGH T he thought occurred to me this Christ- mas that perhaps the seemingly pointless and...

Amanda Craig watches some abortions and listens to the commentaries of the doctors involved SEVEN abortions are to be performed at the NHS Samaritan Hospital in Marylebone...

THE Indian rising in America is pro- ducing the usual horrible scenes. A body of one hundred and twenty war- riors, marching from the Cheyenne River, with their wives and...

The return of a million Soviet Jews to Israel is hailed as a miracle. Ian Buruma considers its consequences Jerusalem THE Israeli airline El Al even flies them in on the...

HERE'S TO WHOM, MRS ROBINSON?

Geoffrey Wheatcroft sees the destruction of distinctive Irishness embodied in a secularist president DUBLIN at present is in a mood of excitement bordering on exaltation. It...

Andrew Gimson on the style and substance of the new Prime Minister `IT'S THE money in the end that matters,' replied a Tory over lunch the other day, on being asked whether Mr...

A reader received the following letter: Dear Major Dance, In regards to your EV-170 magic i/o card using the parallel ports. It appears to me that the Tandy system has several...

persist . ONE night last week, I agreed to cover the prison for a friend of mine. Normally, nothing happens and one receives one's fee simply for having sat by a telephone all...

DEATH OF A WEEKLY

The press: Paul Johnson thinks it foolish to be despondent about the Listener's end THE year that has passed was in many ways a time of sadness, epitomised by the fall of a...

FIRST, though, he must fix his budget day — traditionally a Tuesday in mid-March. I can recommend 19 March. Nigel Lawson obstinately staged his budgets on Cham- pion Hurdle Day...

Dry on the label but sweet in the bottle, here's to a budget for owners CHRISTOPHER FILDES N ext weekend the Treasury lets its hair down. It will not go down very far, because...

THE Chancellor will remember that as last year's Budget approached, panicky self- appointed advisers were urging his prede- cessor to raise taxes and so try to slow the economy...

MR LAMONT has long chided the City for ignoring the new mass market for share ownership that the privatisations have sought to create, but he must now accept that privatisations...

Sir: Sandra Barwick raises important issues concerning the well-being of girls within `boys' schools (Tully for them', 15 Decem- ber). Setting aside the difficulties that these...

College, my subsequent education at Marlborough was a welcome release and a delight. I was treated with unfailing courtesy and good humour by the masters, and felt loved and...

Sir: Sandra Barwick's article on bullying at co-educational schools is

excellent as far as it goes. However, its conclusions — that girls are bullied at schools such as Marl- borough because they are in a minority is not borne out either by my own...

Sir: I cannot imagine any of your readers, of whom I have been one for many years, being remotely interested in the working day of a chiropodist, as described by Candida Crewe...

Sir: Has any reader spotted a wearer of the Spectator Winter Hat? I noted one in the Arboretum at Westonbirt, but your full- page and persistent advertisement must surely by now...

Sir: It is quite wrong to describe me, in Glashan's cartoon (15 December), as the Rhombus Motcombe of nuclear physics. James Symington 5 Nevern Square, London SW5

Sir: Nigella Lawson's contributions give us much amusement. It is such fun to read of the often curious dishes which people in the UK are apparently prepared to eat and pay for...

Sir: I regret the esteemed Spectator is not yet regular or required reading among the inmates or medicine men at the prison where I minister as Methodist chaplain. Otherwise I...

Inside the monstrous concrete piety John Osborne THE NATIONAL by Peter Lewis Methuen, £17.50, pp. 245 T hirty years ago I insensitively com- pared the creation of a National...

Francis King COMING IN WITH THE TIDE by P. H. Newby Hutchinson, f13.99, pp. 265 T here was a time in the Forties and Fifties when, with uovels like A Journey to the Interior,...

Where the power lies

Alan Watkins GOOD AND FAITHFUL SERVANT: THE UNAUTHORISED BIOGRAPHY OF BERNARD INGHAM by Robert Harris Faber, f14.99, pp.202 I met the late Sir Len Hutton only a few times. On...

Wholly a genius in half his work

Yes, but what about the spiders? There'll be no sheds, pelmets, crannies under stairs, no room for supercargo in the bunkers, whose conditioned air will certainly exclude flies....

Anita Brookner T he surprise — and the triumph — of the season in Paris was that the Prix Goncourt was awarded to a first novel written by a man who sells newspapers from a...

Conservation The Parthenon problem Peter Thompson T his is the story of a single drum of a single column of the Parthenon, to be precise, the first (lowest) drum of the fifth...

Modern times Giles Auty S ince so many art galleries are closed over Christmas and I am, in any case, loafing in agreeable sunshine in the village of Gualchos in the foothills...

Nice bits of fluff Martyn Harris A fter three months in the job it seems presumptuous to offer a balanced review of last year's television, so I shall only men- tion what I...

Christopher Edwards will resume his theatre column next week.

Block- Taki This was the tenth year in a row that the party has taken place — well, with one interruption in 1984. Before that I cele- brated the birth of Jesus in the Palace...

Left-over duck fat Jeffrey Bernard I spent Christmas 1965 in St Stephen's hospital and the registrar there told me that if I ever had another drink it would kill me. He also...

A good question Zenga Longmore W hat runner was Sports Illus- trated's 1954 Sportsman of the Year?' The question came from the dreaded orange (`sports and leisure') section of...

Gary glitters Raymond Keene G ary Kasparov, by drawing the 22nd game of the world championship match in Lyon, reached the critical mass of 12 points which guaranteed his...

D aisy chain Jaspistos 12 YEAR OLD SCOTCH WHISKY I n Competition No. 1657 you were in- vited to write a 'daisy chain', a poem in which each word begins with the last letter...

Solution to 988: In a hole The unclued ligh s

EVERY theatre critic goes to a first night in the knowledge that any rough edges should have been sanded during the pre- view weeks, a film critic knows that the film she sees...

Private Eye has parodied other weeklies. Now it is your turn to parody Private Eye. You can choose any single regular item, but don't exceed 150 words. Entries to `Competition...

Crystal-set commentary Frank Keating MELBOURNE gone, now we're waking up in Sydney. Whatever the score, there is something serenely soothing about listen- ing to the Test...