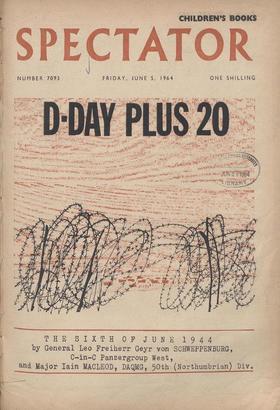 W ITH Nehru gone, New Delhi becomes a less important place, at least for a time. His being there made it an almost automatic stoppingxplace for world leaders travelling East or...

'ROYAL SCHOOL ALERTED' led the Daily Mail on Tuesday as the typhoid wave threatened to spread to Gordonstoun. Aberdeen's schools meanwhile were closed and the city all but...

SARAH GAINHAM writes from Bonn: The point of the State Visit of the Queen to Bonn is the same as that of the Franco-German Treaty of friendship. There comes a point in any...

From DREW MIDDLF.TON li ENERAL DE GAULLE will not attend any of the ceremonies that will mark the twentieth anniversary of D-Day in Normandy this Satur- day. His refusal to do...

Sentence of the Court

I the world of crime and punishment the last 'fortnight has disclosed distinct signs of a new climate, of a more professional attitude towards the difficult business of...

Opening Up the Apple By MARY BENSON O NE year ago I was with Medgar Evers, the friendly, moderate but extremely determined Negro leader in Mississippi. On the previous night a...

Twenty years ago the greatest armada in history crossed the Channel towards the Normandy coast. The Combined Chiefs of Staff of the United States and the United Kingdom had...

On the Other Side of the Hill

By GENERAL LEO FREIHERR GEYR VON SCHWEPPENBURG* N a peaceful room in St. Germain in the early I summer of 1944 I was sitting with the Chief of Staff of von Rundstedt's Western...

ENOCH POWELL, MP ' will be the first contributor to a

series of articles in 'the 'Spectator' which will examine the major issues to be decided at the general election. His article will appear next week.

How to Pick the Winner The combination of Derby week

and the D-Day commemoration reminds me of a sad venture of mine. Partly to fill in the time of waiting for the assault, 1 made a book at 50 Division Headquarters on the 1944...

One of my minor eccentricities used to be collecting anecdotes under the heading 'Little did I know . . .' Political memoirs are the most fruitful field for these exercises in...

By . HENRY FAIRLIE W E all know that, whether Sir Alec Douglas.. Home (Bless-His-Heart) or Mr. Harold Wilson (God-Rest-His-Soul) is returned in October, none of our obvious...

I'm having trouble with my proprietor. I always knew I would sooner or later. And all because I said that I thought the principal candi- dates for extinction were the BBC,...

I was fascinated by the reaction of The Tinier to the startling news that Stuart Hood is going over to commercial TV. This story made the front page of almost every newspaper,...

A Few Plain Words Over and over again we read

that part of our defence against typhoid must be 'close atten- tion to personal hygiene.' Surely here, if ever, Ministers and newspapers should say exactly what they mean. They...

Aberrations on the Front Page By RANDOLPH S. CHURCHILL In its first edition the Standard led on 'NEHRU ANXIETY,' while the News led 'FLASH POINT IN LONDON BUS CRISIS.' The...

By •CHRISTOPHER HOLLIS Do the policies of Mr. Goldwater Hold water? Has the electorate ever handed it To an extreme rightist candidate? Governor Rockefeller Seemed quite a...

LORD ATTLEE ON J. H. THOMAS SIR,—May I correct both

Lord Attlee and Mr. Blax- land? 'Charlie' Cr amp's given name was Conce- more; where it came from I do not know. This, however, is not Mr. Blaxland's only mistake. E.g., he...

SIR,—Lord Attlee's review of the book on 'Jimmy' Thomas shows

glaringly the least attractive side of the Latour movement. They are so mean and ungenerous to one another. Is there no human kind- ness left in the party of so-called brotherly...

THE HALFPENNY CULTURE SIR,—Mr. Ronald Duncan's article on the Conserva-

tive Party's attitude towards the arts has exposed a most vulnerable flank in its philosophy. The whole purpose of its progressive policies in education will be lost unless...

SIR,—Why do you not step up to that chap Welensky

and sock him one? With such bold leader- ship, half the Conservative Party would nominate you PM. Alternatively, the other half would gladly subscribe to give you a proper...

QUOODLE SIR,—Quoodle lists me with three gentlemen, in whose company

I should otherwise be delighted to find myself, as a 'well-known left-wing propagandist.' I hope you will allow me to adapt, very slightly, two sentences from Mr. lain Macleod's...

SIR,—Part of the answer to a question in your columns

last week is that Lord, put beneath Thy special care One-eighty-nine Cadogan Square, is from `In Westminster Abbey,' by John Betjeman (Old Lights for New Chancels, 1940,...

COMMERCIAL RADIO SIR,-1 have always been an admirer of the

Rt. Hon. lain Macleod, MP. Perhaps the fact that thirty- eight years ago I was one of his father's panel patients has had something to do with this. I believe he did a...

SIR.--I am engaged in a study of, the immediate British reactions to the murder of the Archduke Franz Ferdinand at Sarajevo on June 28, )914, and would be glad to hear from any...

Cooper. The Church, basing herself on the commandment, for- bids us to kill, and some, such as the Quakers, have interpreted that command unconditionally, irrespec- tive of...

CORRECTION. In the Spectator on May 15 it was wrongly

stated that Malaysia is sharing a two- Year term on the United Nations Security Council with the Ivory Coast. Malaysia is, in fact, sharing the term with Czechoslovakia while...

SIR,—The effect of commercial radio in the United States is

scarcely debasing when one considers that San Francisco, population 880,000, provides far better radio service for twenty-four hours daily than can the BBC for eighteen hours....

THE BBC AUDIENCE would be interesting to know what Quoodle

meant by his reference to a 'new low' in the BBC share of the television audience. • The ratio in the month of April was BBC 46- I V 54. GEORGE CAMPEY Head of Publicity BBC,...

THE ACT OF CREATION SIR,-1 cannot complain of any lack

of courtesy in Professor Newth's review of my book; my only complaint is that though his review occupies a whole page, he evidently forgot to tell the reader what the book is...

TWO QUOTATIONS SIR,—The first of the two pieces of verse

quoted by your correspondent Mr. Gardom was written during the first months of the 1914 War by J. C. (later Sir John) Squire. As I recall it, the quotation ran thus: God heard...

Green Caps and Demons By NEVILLE CARDUS ACCORDING to the fore- casts, or let us say prognostications, of the experts, the Australian cricket team of 1964 is the weakest in...

Man in the Middle. Leicester s (O qu d a eo re n ) , Seance on a Wet Afternoon. (Odeon, Haymarket.) (Both 'A' certificate.) TRIAL films follow a . well-established pattern:...

The Wood and the Trees

The Conscience Awakes By CONSTANTINE FITZGIBBON A NUMBER of people, of whom I am one, regard the internal German resistance to Hitler as one of the most admirable, and in...

`Fire in the Blood'

Last week your orange jockey-cap perplexed The lecturer's attention from his text. This week, red-riding-hood, you came to say Storms in the forest tore your shrubs away. -And...

The Lifters of Blackmail

It was not, strictly speaking, as a professed depredator that he now conducted his opera- tions, but as a sort of contractor for the police; in Scottish phrase, a lifter of...

Brecht on Theatre. Translated and edited by John Willett. (Methuen, 50s.) `WITHOUT actually seeing him buried I cannot conceive that he is dead,' says the student Brecht of...

OF the literary men under review Ronald Duncan (All Men Are Islands, Hart-Davis, 35s.) comes off by far the best. He is the sort of opinionated odd- ball character who may be...

Down to the Sea Reach for the Ground. By R.

F. de la Reguera. (Abelard-Schuman, 18s.) BELIEF that a bay in northern Oregon would become the New York of the west coast leads the narrator of To Build a Ship to make a...

15s.) is a resourceful small girl whose worst moment is waking to find her identity gone. A strange boy with cropped yellow hair stares back at her from the mirror. The...

Sound Beginnings By ELAINE MOSS tsrraustAsm for English,' wrote Guy Boas, `can neither be taught nor learnt, it can only be caught, like measles.' A child is prone to this...

Time of Trial by Hester Burton (O.U.P., 15s.) has been awarded the Library Association's Carnegie Medal for 1963: this medal is given each year to an outstanding book for...

HISTORICAL fiction has never been my strong point, yet my favourite of this batch is a story of the seventh century. Talargain, The Seal's Whelp, by Joyce Gard (Gollancz, 13s....

ANY book in which a child is able to identify himself with the hero becomes more than a book, a personal experience, passionately enjoy- able—and this is the case with Ride a...

All Over the Place

TRAVEL and the means of travelling feature largely in this group of general children's books. The Longacre Book of Aircraft (Odharns, 15s,) begins even before learns with AShur,...

CAESAR goes with clogged inkwells and the intimate pitted surface of the old school desk. His mighty battles have mingled with the memory of summer bees, droning on like the...

WHICHEVER party gets in at the general election, it will be a party in favour of more science teaching, and of science teaching in primary schools. The practical difficulty is...

Carve Her Name with Pride: The Story of Violette Szabo, GC. By R. J. Minney. (Collins, 12s. 6d.) PurriNG flesh and blood round the names of history requires special gifts of...

By CUSTOS ITHE 'bear' market in equity shares continues I and it will be interesting to see when yields begin to tempt the institutions into buying. The Financial Times index...

Is Mr. Maudling 'With It'? By NICHOLAS DAVENPORT THE best course of action for the Chancellor of the Exchequer is to send his economic advisers away on holiday and call in his...

By LOTHBURY tsuurs from Reed Paper Group for 1963, ilkannounced last month, can be considered as highly satisfactory. Sales were up over the £100 million mark and pre-tax...

Criticising the AA By LESLIE ADRIAN THIS year's annual general meeting of the Auto- mobile Association was more interesting than that !Al somewhat staid organisa- tion's...

By ALAN BRIEN I HAD been toying with the idea of unveiling this week a few more pieces of Beaverbrookiana ally that Kohinoor among anecdotes about the night the Lord flambeed...