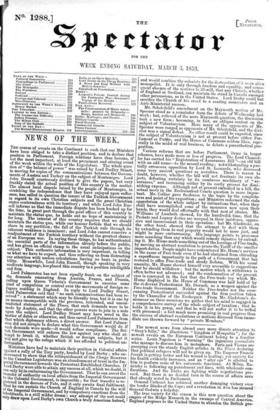 LIE course of events on the Continent is such that our Ministers have been obliged to take a distinct position, and to declare that position in Parliament. Foreign relations...

The newest news from abroad once more directs attention to

"Grey's folly," the illustrious "kingdom of Mosquitia"; for the newest events on the European Continent belong to a familiar series. Louis Napoleon is " warning " the ingenious...

THETIS has been little movement at Court this week. Prince Albert, by the desire of her Majesty, held the first levee of the season, at St. James's Palace, on Wednesday : it was...

On Saturday a deputation from the Peace Conference waited upon Lord Aberdeen and presented to him a memorial agreed to at the meeting re- cently held at Manchester. Mr. Milner...

An association has been formed in Ireland during the past month, the earliest movement on the subject being the 3d and the latest the 7th of February, to organize "the...

'Viscount Elmley, eldest son of the present Earl of Beauchamp, was elected on Monday as Member for West Worcestershire, in the room of General Lygon, who succeeds to the title...

FBANCE.—Tho comparative dulness of Parisian news has this week: been somewhat enlivened by a fresh attack on the press. For some time the Emperor has seemed to permit to the...

Colonel Hanle, Surveyor-General of the Ordnance, was unanimously ralected as Member for Forfarshire, yesterday sennight. His speech of thanks contained an animated expression of...

SATURDAY. The second reading of the Clergy Reserves Canada Bill, in the House of Commons last night, was preluded by the presentation of a few clerical petitions from the...

The Reverend John Jackson, Rector of St. James's, Piccadilly, has been selected to fill the see of Lincoln, vacant by the death of Dr. Kaye. Dr. Denvir, Roman Catholic Bishop...

The Vienna Lloyd of Tuesday contradicts the report that a

conspiracy had been discovered at Column. A telegraphic despatch from Vienna, of Thursday's date, says that "the improvement in the state of health of the Emperor advances...

In reply to a deputation, yesterday, Lord Canning stated that

THE INCOME-TAX DIFFICULTY. Sin—Notwithstanding your notice to correspondents, allow me to say, in which remark I feel assured most of your readers will concur, that you have...

Mr. Woodin—he of "the Carpet-bag and Sketch-book "—whom those who

have seen him admire for his talent in personation, and whom even those who have not seen him familiarly know from the vigour of his street-advertisements--has removed to the...

At the Com6die Francaise, a little dismal drama in one act and in verse, written by M. Auguste de Belloy, was brought out on Friday the 25th February, with the pleasant title of...

In theatrical matters, we Londoners keep Lent more strictly than many of our Catholic neighbours would be inclined to suspect. Tho pantomimes brought out at Christmas are...

A fearful "accident" was transacted on the Lancashire and Yorkshire

line last night. An express-train got off the rails, and ran up an embank- ment. The engine-driver and a child were killed; eight severely wounded— one it is feared, fatally....

STOOK EXCHANGE, FRIDAY APTBEN0019. The fluctuations in Government Securities this week have been quite in- significant. Consols, which closed on Saturday at 991 1, have only...

SONG OF THE SABBATH.

281h February 1853. In the approaching dismemberment of Turkey, Auatria seeks to gain pos- session of the Valley of the Danube ; Russia, of Constantinople and the ad- jacent...

TH.E ArunrAL DISARMAMENT MISSION. As Lord Aberdeen has seen fit to entertain the proposition laid be- fore him by the deputation from the Peace Conference lately as- sembled at...

41h March 1853. SIR—In reference to your article of last week on the above topic, allow me a word of explanation. When the first meeting was held to originate the Club, the...

LORD DERBY ON THE CLERGY RESERVES.

"EITHER we must maintain the original purpose of the Clergy Reserves," argues Lord Derby, and resist "the introduction of the Republican principle of Voluntaryism" in Canada,...

INDIA AS AN OPEN QUESTION.

SOME controversy has been raised out of Lord Aberdeen's reply last week to Lord Ellenborough ; the interpretations severally being, that Ministers intend to legislate for India...

WHEN people of a certain order of intellect are called to account for volunteering opinions on subjects respecting which they know comparatively little, they endeavour to...

A SHORT AND EASY METHOD WITH BRITISH SENATORS.

THE most curious object by far that the public has just now to contemplate, study, and amuse itself with, is the conscience of the British Senator, as it lies anatomized for...

LARPENT'S PRIVATE JOURNAL DURING THE PENINSULAR WAR.* To fully understand the nature of this work, it is necessary to know something of the author, Francis Seymour Larpent, and...

SEEMANN'S VOYAGE OF THE HERALD"

A. SURVEY of the Western coast of America was the primary ob- ject of the Herald when she left Plymouth in 1845. After pass- ing between two and three years on this survey from...

Boom. Discoveries in the Ruins of Nineveh and Babylon ; with Travels in Ar- menia, Kurdistan, and the Desert : being the Result of a Second Ex- pedition undertaken for the...

THE CONDEMNATION OF MARIE ANTOINETTE : PAINTED BY DELAROCHE. A picture of this great historical subject, just painted by Paul Dela- roehe, has been on view at Messrs....

We have been favoured with a copy of a Catalogue, drawn up, for pri- vate reference, by Mr. Crofton Croker, of an interesting collection of rings and personal ornaments in the...

ADMIRALTY, Feb. 28.-In consideration of the successful operations against Ran- goon and Peo . ii, and in the Irrawaddy river, the following Naval promotions have taken place, '...