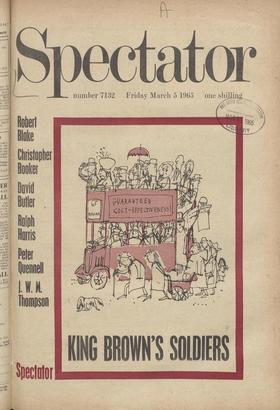 the other One Hundred Days began: in 1965 Mr. Wilson was safely into the second hundred. The Premier gave a pep-talk to the nation on TV, and though the Opposition leader, the...

CONCEDE,' said Mr. Crosland, 'that the JL decision not to establish any more new universities is disappointing. Our reasons are indisputable.' Perhaps they are, but Mr. Crosland...

One year's subscription to the 'Spectator' costs a 5s. (inclading

Appeasement P. J . . HONEY writes: Since the heavy Viet Cong attacks in South Vietnam during February and the retaliatory bombing of North Vietnam which followed them, a...

A Matter of Principle

OUR MOSCOW CORRESPONDENT writes: Yevgeny Vuchetich is one of the prominent Soviet sculptors. He is particularly well known for a number of sculptural pieces executed as war...

LEO BARON writes from Bulawayo: As the Bottomley-Gardiner conducted tour drew to a close, it seemed fairly certain that the early pessimism was justified. There is still no sign...

Germany and the Queen

From SARAH GAINHAM BONN I N two months' time the Monarch of Great 'Britain will be officially in Germany for the first time in over fifty years. The last time was in 1913,...

The New Mythology By ALAN WATKINS p ROFESSOR Gilbert Ryle tells somewhere the story of the native tribe who believe that a steam engine works as it does because there is a...

By DAVID BUTLER T r TWICE in the last twenty years arguments 1 over the redrawing of constituency boun- daries have produced parliamentary turmoil. Is it about to happen again?...

I was in the middle of writing a paragraph about NSMAPMAWOL when my telephone rang. Would I appear on the programme on Friday? 'Ho I' said I, 'and with whom, pray?' Patrick...

The Fight for the (BBC) Leadership

By CHRISTOPHER BOOKER a headlines,' as the Observer put it, 'were almost worthy of a sacked Minister of the Crown.' Whether they, in fact, as it went on, 'measured the public's...

The Rule of Law

Sir Alec's solution to the problem of finding a suitable voting procedure for any future election of a leader of the Conservative Party has been accepted with satisfaction by...

Send for Buchanan As a member of this office was

walking home at the top of Tottenham Court Road on a recent evening, he felt something nudge his elbow, something he felt was much more sub- stantial than a pedestrian. A...

During his press conference at the United Nations Headquarters in New York last week, U Thant held up his own country, Burma, as an example of how a Communist threat could be...

Anthony Burgess, the novelist and Spectator re- viewer, next week takes over our theatre column. He has been a dramatic critic before—for the oldest paper in Europe. This was...

T HAD planned a full day for Monday. A regu- lar busy bee of a day. Rise and Shine. Deal with my correspondence. Leave to catch the 10.10 a.m. plane from London Airport to...

King Brown's Soldiers? By RALPH HARRIS I often wish 1 were a King, And then I could do anything . . . (Christopher Robin in A. A. Milne's Wizen We Were Very Young.) W HEN...

This is the first of several articles dis- cussing the

Government's prices and in- comes policy. The next will 4'e by Roy Hattersley, Labour MP for Spark brook.

The Making of Bishops

By JOHN GOSS ANOTHER mystery has vanished. The means Ink whereby a cleric was selected for elevation to the episcopal bench was long known to very few. Recent years have lifted...

From MURRAY KEMPTON NEW YORK T HE evenings with the Moscow Art Theatre turned out to be as curiously old-fashioned as days with Nikita Khrushchev used to be. The audiences for...

Si,—Plaudits on your new cover 1 Lot us have more such stimulating creatures as Quentin Blake's Gallic seraph. But may you also never for g et the little bowler-hatted character...

Sta,—Vcry many con g ratulations on your attractive new cover. This is

q uite the best sort of chan g e— a stron g and stylish desi g n but nothin g 'jazzy.' Per- haps I may say that you have altered your appearance

SIR,—Good for Quoodlel A very proper little piece to come from another son of a GP. But I notice that he does not actually say anythin g very definite about supportin g our...

SIR,—When writin g his article 'The Pro g ressive Syndrome'—it could hardly be called a review—. in' which the book Suicide of the West, by James Burnham, is mentioned, Mr....

Sit,—Much in sympathy as I am with the excellent typo g raphical

sentiments echoed in your issue today, I feel it is only fair that somebody should point out to you that the Modern typeface was, in fact, cut some forty-four years before your...

SIR, —In your issue of January 22, Mrs. Ruth Price writes that a few years after the inception of the Liberal Party it became clear to her husband, Pro- fessor Thomas Price,...

StR,—Your correspondent Rabbi S. Warshaw in the February 26 issue of the Spectator states, 'It is obvious that the Vatican, in its present efforts to Prevent the performance of...

SIR,—Where immi g rants are unpopular it is lar g ely because they suffer from our housin g shorta g e in a more spectacular way than the natives. This, more than any other...

Bennett's Moral Mines By CHARLES REID F GH me as, I suppose, for many others who play the piano (in a manner of speaking), the test of a new opera is whether, after a second...

SIR, - Quoodle calls the Tories' addendum to the I-, CC recommendation to ban smoking in cinemas the best comment on this ludicrous piece of fussi- ness.' It is not. Smoking on...

SIR —In his review of Three Novels, by Conrad Aiken, John Davenport points out that we have mis- quoted what Mr. Graham Greene wrote in the Spectator (November 8, 1935, issue)....

am preparing material for a critical study of the plays of the late John Whiting. Will anyone who has information about articles on his work, reminiscences, etc., please write...

SIR, -.--Yes, indeed, what are parents to do about the hopelessly unsuitable granting of 'U' certificates to films? Last summer my husband and I and our two child- ren, aged...

SIR,—Crossword No. 1158 (February 19) seems to require a word 'alright' as a solution for 29 across. Please remind the compiler that the use of 'alright' for 'all right' has no...

Si,-1 fear that the 'political hazard for the regime' ER Ulster referred to by Mr. Peabody is not sup- Ported by the facts. Last year at the general election, fought on...

SIR,—Mr. Nevile Wallis is too often too naughty for words. Again he demonstrates (in reviewing my exhibition, February 26) his inability to come to terms with the aspirations of...

Echo or Counterpoint? 9 - '0 what extent can you be significantly, excitingly visual when you are examining a living poet or composer on TV? Obviously the poet can talk,...

One-night Stand Sleepers' Den. (English Stage Society.) M R. IRVING WARDLE, in an excellent series of articles on the London Stage in The Times, is currently underlining the...

The Visionary Collins Beneath the tyranny and captivity of the mediocre culture of our own technological civili- sation, there still flows the living river of human...

By J. W. M. THOMPSON HE passage in British political history Which 1 . ended on October 15, 1964, is seen, at even this short distance of time, to have been more richly provided...

Mixed up in Messes

Wellington and his Friends : Letters of the First Duke. Selected and edited by the Seventh Marshal Massena. By James MarShall-Cornwall. (0.1J.P., 42s.) Lord Chancellor Jeffreys...

Surrounded, bound by Many filaments To fellow-men, to Other places, things— I try to see. I Touch, taste, spider-like, These trembling threads. Not flies but feelings Feed me....

Guerrilla, By Charles. W. Thayer. Foreword by Macmillan, 50s.) WHEN the Russians graciously presented the Chinese Communists with the Soviet manual on guerrilla warfare, the...

George Canning. By P. J. V. Rob. (Macmillan, 36s.) C ANN1NG has had a better press from posterity than from his contemporaries. Part of the explanation is that both Gladstone...

By PETER QUENNELL D mini° the 1890s, London hostesses some- times issued invitation cards with the note: 'to hear Mr. Oscar Wilde tell one of his stories' scribbled on the...

The Glass Cell (Heinemann, 21s.) opens superbly. Patricia Highsmith uses her incomparable gift for getting us emotionally involved with her characters to drag us into the...

Take a Wound, Take a Bow

Inflationary Gap or Gaffe? By NICHOLAS DAVENPORT IT AVING been fearful that the budget drama might end in tragedy — the Chancellor over- taxing, over-deflating and pushing...

By LOT II B I.! 11 Y T HE directors of City and Country Properties Ltd. have declared an increased final dividend Which gives a total for the year ended September 30, 1964, of...

By CUSTOS A DEPRESSING economic analysis from the ..National Institute started ancther down- turn in the industrial share markets. It should be appreciated that the jobbers are...

By LESLIE ADRIAN Sorry, chaps no travel guide for you, but the ladies need special advice about flying to con- vince them that airlines are not 'mysteries that only experts—or...

Another Part of the 'Forest By STR1X In King Lear, Act IV, Scene VI, Oswald is about to murder the eyeless Gloucester when Edgar intervenes. He has already been com- pelled by...

By ALAN BRIEN EVER since first came vat across the word (in T. S. Eliot, I think) it has been my ambition to be a 'poly- math. Early in my gram- mar school days, it became...