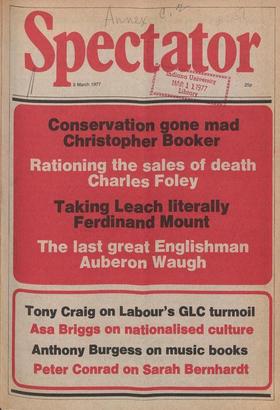 With only five British Leyland models still in production there is no doubt that—yet again--the company faces a grave crisis. Despite every financial incentive offered under the...

The Tories' uncertain tide John Grigg Mrs Thatcher has called upon the Tories to 'prepare for office', and according to the normal laws of politics it should, indeed, be only...

The last week has been a sombre one for those professionally concerned with the laws of libel, that is for those more likely to be on the defendant's than the plaintiff's end of...

One just man Auberon Waugh In the village of Chilton Foliat, Wiltshire, where I used to live, stands the Tudor mansion famous for its legend of the Littlecote Ghost. The story...

Richard West Johannesburg When somebody asked the other day what Change I had seen in South Africa, I found tn . yself giving the very subjective answer that life was much...

Charles Foley Los Angeles The American arms industry—much of which calls California home—is watching with warm professional interest to see what steps the new President may...

Amit Roy In the 1971 general election, the Indian opposition parties ganged up on Mrs Gandhi with the war cry : 'Indira hatao' (remove Indira). The people were not impressed....

Tony Craig Labour's manifesto for the Greater London Council election in May is blandly entitled It's Looking Good. This better describes Conservative chances of recapturing...

Ferdinand Mount Sir Edmund Leach is Provost of King's College, Cambridge. He is also Professor of Social Anthropology, Senior Fellow of Eton College, a Trustee of the British...

Something old, something new

Christopher Booker I must apologise for an injudicious attack of 'flu which prevented me last week from continuing my exploration of some of the deeper issues lying behind what...

Confederacy Jeffrey Bernard The thing that delights me most about racecourse con-men is their method of approach. One man at Kempton Park last Saturday who tried to chat me up...

A new industrial strategy? Nicholas Davenport If you ask me why Wall Street has been behaving bearishly in the face of a huge refiationary spending programme—a boost of...

Sir : I am grateful to Colin Bell (26 February) for his reference to my incorruptibility, advise him to learn to spell my name correctly if he wants to make anagrams on it,...

Sir: Mr Cosgrave's article on the whooping cough vaccine and the cold-blooded attitude of Mr EnnaIs was most timely and expressed exactly my own fears for a six-month-old son....

Sir : John Grigg (26 February) asks for further instances of medical men who have risen to the leadership of their countries. Two immediately spring to my mind: Dr Hastings...

Sir: Sir Harold Wilson is to lead a commission investigating matters in the City. He should be a good choice for this particular position. Looking through the pamphlet put out...

Sir: It is time John Torode (Letters, 19 February) moved from the Guardian where he has never been at home to the Telegraph where he belongs. The former is a mental resting...

Sir: Despite John Torode, CHE has never supported the Paedophile

Information Exchange. The Bill which we have drawn up and which we are endeavouring to have sponsored in Parliament seeks to make the age of consent for homosexuals the same as...

Sir: I would like to comment on a book review (5 February) entitled Alibi that has recently come to my attention. It concerned a book by Taki Theodoracopulos, The Greek...

Sir: Mr George Gale's relations (26 Februuary) are not Scotch. They may be Scots. Mr Gale may send me a bottle of the former. I shall drink to the latter, David M. L. Richardson...

Books on the Performing Arts

Asa Briggs The Nationalisation of Culture Janet (Hamish Hamilton £8.50) It is almost as difficult to write about the history of the arts as state-supported activities as it is...

Benny Green Lyrics on Several Occasions Ira Gershvim (Elm Tree Books E4.95) As a general rule, the literature of popular music is too ridiculous to have any practical use...

Rodney Milnes The Callas Legacy John Ardoin (DuCk worth £5.95) Perhaps this exhaustive discography should have been sent for counsel's opinion rather than review. Of the...

The rules of the game

Scottish landscape painters Martin Baillie Landscape painting inevitably played a leading role in the emergent Scottish school of the second half of the nineteenth century...

Gang shows Ted Whitehead Privates on Parade (AI dwyc h ) Salome (Round House) it's odd how many autobiographical plays a re Populated by stock characters. in Privates on...

Pioneer press John McEwen Artists at Curwen (Tate till 3 April) was put together at two months' notice to fill a gap. In the circumstances, its organiser, Pat Gilmour, the...

Tame shrew Jan Murray The Royal Opera House regrets to announce that John Cranko's Onegin, scheduled for its first performance by the Royal Ballet on 16 February, has had to be...

Fake issues Richard Ingrams The BBC's Money Programme is sorely in need of reformation. Last week we were promised an inquiry into the financia l plight of the middle classes,...