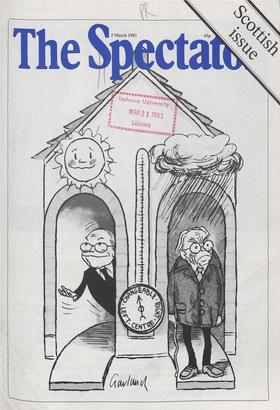 est Germany goes to the polls on Sun- day and a good deal hangs upon the result. The importance of the election is by no means confined to the West Germans, although naturally...

Not so freakish Colin Welch was slightly vexed by the Bermondsey result, partly because I got it wrong, partly because albatrosses do so suit the Labour Party, don't they? I...

T he number of people who watch tele- vision has apparently dropped by 12 per cent in the past year. Fewer people are i also going to the cinema as well, and t is said that the...

Valuable woggle mystery Auberon Waugh O n Friday of last week I received a letter asking me whether I would be prepared to repeat my subscription of last • year to the Combe...

Timothy Garton Ash A over West Germany today, thousands of outwardly respectable men and women are sporting lapel badges Which declare (literally translated) 'I am an indecent...

Patrick Desmond O nc of the most intriguing news stories of recent weeks, all the more intriguing for not being subsequently confirmed, was of an abortive military coup in...

Due to overwhelming response to the last Spectator Wine Club offers, deliveries may be delayed by up to 14 days. Please be patient.

Sam White Paris W hatever their outcome, the municipal elections to be held in France over the next two Sundays will mark a watershed in the history of the country's Socialist...

Geoffrey Wheatcroft T here are no typical parliamentary con- stituencies and thus no typical by - elections. Bermondsey is not representative of the ' inner - city ' seats...

The divisions in Scotland

Allan Massie Q cottish politics are different. They L./always have been, though it has not always been apparent. The difference rests in something that goes much deeper than...

Gavin Stamp 'p ray,Sir, have you ever seen Brent- ford?' Samuel Johnson rudely inter- rupted when the economist Adam Smith was extolling the beauties of his home, Glasgow. The...

On and off the ball

Richard West /The 25th anniversary of the Munich air crash has brought a fresh output of books on the football players of Man- chester United who died in, or survived the...

People's power Paul Johnson T he claim that Labour's Bermondsey disaster was brought about by the media seems set to become a stock item in left- wing mythology. The...

Mr Gladstone left Cannes on Mon- day, thoroughly refreshed, it is believed, by his Southern holiday, which has only been impaired by the gigantic microscope held over him. He...

Sir: Your funny television critic Richard In- grams says I am an awful man because I us- ed to contribute to the Forum magazine — 'and for all I know he still does' (26...

Sir: Christopher Booker's review of The Guinness Book of Records (17 February) discusses several dubious aspects of this curious publication, but not the rather im- Portant...

Sir: Your book review (15 January) of The Viceroys of India recounted one well- known anecdote about the Willingdons: your readers are entitled to another. Lord Willingdon, a...

Sir: Can the extraordinary Mr Worsthorne be serious in his feigned shock at the relative honesty of the staff and gentlemen of the Turf — that most genial of clubs, whose walls...

Sir: Christopher Hitchens (19 February) denies that the fuss about Israeli complicity in the massacres of Sabra and Chatila has anything to do with anti-semitism. He pro- tests...

Whitewashing the Presidents Louis Heren America in search of itself Theodore H. White (Cape 10.95) T heodore White's Making-of-the-Presi- dent books have made him rich and...

Arthur Marshall A Small Thing — Like an Earthquake Ned Sherrin (Weidenfeld & Nicolson £10.95) hance and wide talents have made Ned Sherrin something of a Jack of All Trades in...

open to non-subscribers Take out a subscription to The Spectator and we will send you a free, signed copy of THE LAIRD OF ABBOTSFORD (A biography of Sir Walter Scott; worth...

Ticonderoga Fitzroy Maclean E ven their enemies (and they have many) 1—;/ would admit that by the middle of the 18th century Clan Campbell had achieved a position of total...

Oliver Bernard F or me to attempt two sensible para- graphs — or even sentences — on the subject of George Barker seems such a folly as can only be justified by my feelings...

A. N. Wilson B y far the greater part of the readers of the Spectator have always been of a class that is not affected by partisan spleen: its circulation being chiefly, as it...

A few Scottish painters Jo Grimond T his article is not a review of Scottish Painting. It is about a few painters of the late 19th and of the 20th century. William McTaggart...

Old-fashioned Peter Ackroyd The Verdict ('15', selected cinemas) T here is no need to be put off by the fact that this film has been nominated for several Oscars — Best Use...

Questionable Richard Ingrams Television, like the Church of England, I seems to spend an awful lot of time do- ing programmes about bombs, missiles, and especially the cold...

Friendless Taki dI behind feel like an agent operatingemy lines in a friendly occupied co111 1- try. I've never seen so many mortal enemies, not even back home in Greece....

Time for a rest Patrick Marnham Dehold a great priest who in his days LP pleased God.' Perhaps this will be the text for the memorial service on that happy day when the Bishop...

Jaspistos reports: Competitors were asked for an extract from a brochure describing the sort of commune they would least like to join. A recent article in the Times stimulated...

No. 1259: Clues included Set by Jaspistos: You are invited to produce a plausible piece of prose (maximum 150 words) containing the words, but not necessarily the punctuation,...

All change Raymond Keene he new Fide President, Florencio Cam- pomanes, chose the super-tournament Just concluded at Linares as the setting for a commission to discuss major...

T he possibility of a national miners' strike drew closer. The strike started in South Wales in protest against pit closures and spread rapidly to Scotland. It was revealed that...