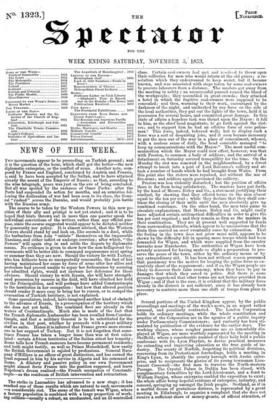 Two movements appear to be proceeding on Turkish ground ; and it is the question Of the hour, which shall get the better—the new diplomatic enterprise, or the conflict of arms....

Several portions of the United Kingdom appear, by the public

proceedings and meetings of the week's news, in an aspect rather unusual, and peculiarly contrasted. The London Corporation holds its ordinary meetings, while the whole...

The strike in Lancashire has advanced to a new stage

; it has reached one of those results which are natural to such movements --a considerable riot. The Beene of the tumult was Wigan, where a fanto7 population is combined with a...

Terrivrrms, given in honour of the illustrious guests of the Queen, form the gist of the Court newsman's budget. Her Majesty has entertained a distinguished circle at Windsor...

The artisans of Sheffield have an educational institute, entirely self- supporting, which they call the People's College. Wednesday the 26th October was the anniversary meeting...

A "National Association for the Vindication of Scottish Rights" has been recently formed ; and on Wednesday its adherents appeared before the public at a crowded meeting in the...

The Dublin Exhibition was finally closed on Tuesday, by the Lord. Lieutenant, in the presence of about twenty thousand persons. Lord and Lady St. Germans, preceded by Mr....

FRANCE.—The report of the recall of M. de la Cour from the Turkish embassy has proved well-founded ; and his successor, General Baraguay d'Hilliers, has left Paris for...

The week ending Saturday last produced 73 deaths above the average, —" arising chiefly from the epidemic " ; "which has now attacked many parts of the Metropolis, widely...

The Gazette of the 25th October announced the following appointments under the provisions of "the Charitable Trusts Act, 1853." "Peter Erle, Esq., barrister-at-law, to. be...

We have been favoured with the sight of a letter

from an English resident in St. Petersburg, written on the 2241 October, and recounting the results of two interviews between the Finance Minister of the Czar and certain of the...

A. week of dry weather, in which the farmers have

been making up for lost time in the sowing of wheat, has arrested the upward tendency of prices at Mark Lane. There was a pretty fair attendance of buyers yes- terday; but the...

SATURDAY. Various reports, by telegraph, from the seat of war, arrive by way of Paris and Vienna. One purports to be an "official communication, " sent, undated, from...

Willis's Rooms were crowded yesterday by a distinguished assembly in

honour of the memory of Lieutenant Bellot. Sir Roderick Murchison - occupied the chair ; the centre of a circle of military, naval, and scien- tific men. The names of the...

as an author of those , dramatie dialogues which go by the name of "Proverbea," has furnished , Ithu ; re- pertoire of the Gymnase with a piece of this sort.called Pour a Cen i...

The St. James's Theatre is open at present for theperforraance

of Eng- lish operas, or operas in English. Attempts of this kind are made it one theatre or another every year and they always fail, simply because they cannot succeed. The...

Our list of London English Theatres is now complete. The Lyceum, which remained closed the longest, opened on Monday last, And general. contemplation may take the place of...

STOCK EXCHANGE. FRIDAY ATTIC:8E00N. The buoyancy which was so prominent in the English Funds on Saturday last has been renewed this week to a considerable extent: the...

At the Princess's, we have a version of M. Bayard's

_File de Famile, more akin to the original, more showily put upon the stage, more elegantly written and less effectively acted, than the version of the same piece at the...

The Lyceum, we regret to say, has started 'with a

stumble. Mr. Wright, once the most stationary now the most migratory of the come- dians, made a debat in his own person, in a farce wherein he discoursed pleasantly of his own...

Accounts from Cork, extending to late on Thursday night, seem

to indi- cate that the floods had in some measure subsided. The lives lost are esti- mated at thirty. The damage done to public and private property is very great. Some of the...

PERHAPS if the Presbytery of Edinburgh had applied to the Duke of Wellington for an order directing a national fast on account of the cholera, the Moderator would have received...

PROFESSOR MATTRICE AND THE LIBERTIES OF THE CHURCH OF ENGLAND. T H E Council of King's College have dismissed Mr. Maurice from hi s Professorship, on a charge preferred against...

ONE of the laudable objects sought by the legislation of last ses- sion was to revise the Charitable Trusts of the country, in order to restore them to their original objects,...

TEE Ragged Schools are giving birth to a Ragged Church. The Lord Mayor lately presided over a meeting or the purpose of erecting such an institution in the Spitalfields district...

STATISTICS OF AGRICULTURE AND LABOUR.

Faint a letter which Lord Ashburton has addressed to the Sta- tistical Committee of the Alresford Union, we are to understand that the proposal to collect agricultural...

THE ACQUITTALS OF MANSLAUGHTER

UNDER the instruction, we may say, of Mr. Justice Cresswell, two Juries have acquitted the architect for his share of the " man- slaughter " occasioned by the falling of the...

LUCK IN ODD NUMBERS—TRIITH IN EVEN?

Sin—The Reform Bill promised for next year will probably be followed by various ancillary measures, designing to effectuate the operation of the franchise so extended. The...

BIRMINGHAM GAOL. Birmingham, 31st October 1853. Sin—In your article beaded "Local Government and Prison Discipline," published on Saturday last, you have with respect to...

Sin — Allow me to revert to this subject, on which I wrote to you some three months back, and which you have again noticed last week. Since it is important to familiarize the...

1 Adam Street, Adelphi, 31st October 1853. Sin—The transit between the City and the West-end of London has lately experienced such a succession of interruption that it would...

PROFESSOR L/EBER ON CIVIL LIBERTY. * FEdNCIS LIEBER, the Professor of History and Political Philoso- phy and Economy in the State College of South Carolina, is a Ger- man, well...

OLIPHANT'S TOUR IN RUSSIA. AND ON THE DANUBE. *

Tin extreme points of Mr. Oliphanes travels in Russia, during the fall of last year, were from St. Petersburg and Moscow to Orsova, the last fortress of Wallachia and the...

A DOZEN years have ripened and perhaps improved the author of The History of a Flirt, though without effecting much change in essentials. There is good writing in The Roses, to...

The Nest. Fac-simile of a Water-Colour Drawing by Hunt. Chrome-

Lithograph by M. and N. Hanhart. [This print is rightly denominated a "fac-simile" ; and a fac-simile of 01)(1 of those modest little bits of the poetry of nature in which Mr....

THE RUSSIAN AND AMERICAN TARIFFS. If the Emperor of Russia could only compel his sixty millions of serfs to contribute as liberally to the national exchequer as the same number...

THE PROVINCIAL EXHIBITIONS. We have before mentioned the bestowal of the annual prize of the Li, verpool Fine Arta Academy upon Mr. W. Holman Hunt's picture of "Claudio and...

On the 20th July, at Birksgate, near Adelaide, South Australia, the Wife of Arthur Hardy, Esq., of a daughter. On the 23,1 October, at Shrigley Hall, Cheshire, Mrs. Brabazon...