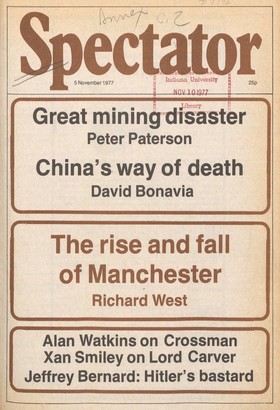 The price of coal

Getting coal is dirty, dangerous and skilled work, and there is nothing essentially outrageous about the miners' demand that men on the coal face should have their pay increased...

Oü sont les . Ferdinand Mount It's not every day you have an axeman down your way. To be strictly accurate, down our way we express ourselves with machetes. Mr Stuart...

New York is the most charmingly old fashioned place imaginable. Manners still exist and so does elegance. Any form of thanks is always answered by 'You're welcome' and only the...

Warm, helpless laughter Auberon Waugh A class at one of our surviving teacher training colleges in the South of England was recently treated to a lecture by the deputy...

Sam White Paris The anti-German outcry in the French left-wing press over the past three weeks is more revealing about the state of France that it is about the alleged threat...

The killings in China

David Bonavia Hong Kong Recent reports from Peking about political executions there and in the provinces have shown just how unsatisfactory the state of information on this...

Xan Smiley It may be worth dazzling followers of the Carver safari with an assortment of more or less relevant Rhodesian statistics. For instance, last year the total black...

Edwin Hoyt Honolulu For those among us who glance nervously over our shoulders at the mention of 1984, a small occurrence in the middle of the Central Pacific Ocean this autumn...

Geoffrey Wheatcroft 'it is the law's duty to protect women from themselves.' (Judge Ewart James, sentencing Corporal Reginald Booth.) 'But once the principle is admitted that...

Colin Bell Aberystwyth Seen from London, Plaid Cymru and the SNP must obviously be lumped togetherindeed most political columnists habitually refer to 'The Nationalists' as...

Peter Paterson The shock waves created by the miners' decision, announced on Tuesday, to reject the Coal Board's productivity scheme are still echoing through the cages and...

The rise and fall of a great city

Richard West When the Manchester Town Hall was opened one hundred years ago, the Liberal statesman John Bright said that no building in Europe could equal it in 'costliness and...

Bill Grundy Sir Harold Wilson is fond of saying that if there is one thing he would like to be remembered by, it is by the fact that the Open University was his idea. It is a...

The pound shines Nicholas Davenport For the first time in its history the City column failed to reveal the whole truth. 'Davenport on holiday' indeed! he was afflicted with...

Sir: I have recently seen Auberon Waugh's article, Thoughts on a bad Pope (8 October). Although his apparent obsessive hatred of Pope Paul is quite irrational, I think the...

Sir: What strange statements are we to hear next about Northern Ireland? Co'nor Cruise O'Brien (1 October) appears to regard Unionists as both invulnerable and sacrosanct. Are...

Sir: I fear that Ann Christopher cannot have read my review of John Fowles's two books very carefully before writing her letter last week. Of course 1 did not generally define...

Sir: Those of us who have been led to believe that the USA is leader of the Western World against the advance of communism, must be appalled at the treacherous and dangerous...

Sir: I cannot have been the only reader to enjoy Jennifer sorry Peregrine Worsthorne's Notebook in your issue of 29 October with its comforting reassurance that in Belgravia, as...

Sir: It is to be hoped that by now even Sir Harold Wilson will admit that in recent years there have been grave misapplications of political rewards. The reason for the...

Sir: In his review of Conference of the Birds — the Story of Peter Brook in Africa (1 5 October) Mr Whitehead makes a point of writing that I 'say nothing about the cost of it...

Alastair Forbes Elisabeth Bowen: Portrait of a Writer Victoria Glendinning (Weidenfeki and Nicolson £6.50) Of the `elegiac' little County Cork churchyard, once enclaved within...

Brian Inglis The Wolf Children Charles Maclean (Allen Lane £4.95) If there is a circle in hell reserved for those who, like the gentleman from Porlock, unwittingly deprive...

David Holden The Natives Were Friendly So We Stayed the Night Noel Barber (Macmillan £4.95) At the popular end of the foreign correspondent's trade twenty years ago Noel Barber...

Peter Ackroyd The Confessions of Joseph Balsz Dan Jacobson (Secker and Warburg E3.90) English readers and critics always prefer to have invention and imagination at second...

Drawing contemporary fire Terence Maloon The Contemporary Art Society has been an intrepid pressure-group as well as a major benefactor to living artists since it was founded...

Americana John McEwen The title chosen for the exhibition `American Painting 1908-1935' (Hayward Gallery till 20 November) is `The Modern Spirit', and how modern indeed is the...

Jewish week Richard ingrams If you were prepared to stay up till 11.35 on Monday you could have heard Beethoven's string Quartet Op. 135 on BBC 2. Earlier in the evening while...

What a bastard! Jeffrey Bernard I loved the bit in the Sunday Times about Hitler's son. You must have read it. A German historian claims to have found Hitler's" son, alive but...