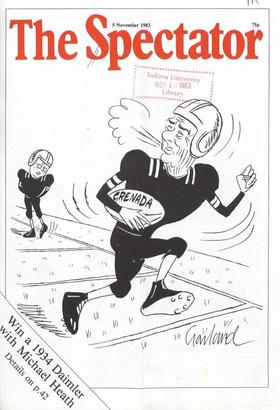 M r Kinnock's distribution of posts among his Shadow Cabinet shows him continuing cautious and conciliatory towards the factions within his own party. His failure to find a...

Eighteen years on Charles Moore A ked about the American invasion, the Foreign Secretary said, 'I think it has long been recognised that where swift action is necessary to...

D isgusted readers of the Daily Telegraph have been persecuting its kindly editor with complaints about one of the best misprints to appear in any newspaper for ages. This was...

On the bread line Auberon Waugh ( - Ill Tuesday of this week we read a head- V line in the Daily Mirror announcing that 15 million Britons were now living 'on the breadline'....

Nicholas von Hoffman I n a trice the electronic landscape of America changed. Where there had been sitcoms, doctor shows and cop dramas, the television screens now displayed...

Look into the eyes

Charles Glass Geneva rr he Lebanese drama continues to unfold, this time on the stage of the Carnival Room on top of the Hotel Inter- continental in Geneva. Nine Lebanese...

Anthony Mockler black-bearded, elegant, rather reminis- cent of a Victorian dandy. 'This', said Manny Suarez of the San Juan Star, in- troducing him, 'is one of the few guys...

Gavin Stamp T iving, as I do, in King's Cross, I con- sider myself a Londoner and an inhabi- tant of the ancient parish of St Pancras; I do not identify with or have any...

A bit of a Bolshie

Richard West Bedford T he Secretary for the 'Environment' dis- closed last week that the Central Elec- tricity Generating Board is going to dump nuclear waste at the village...

Geoffrey Strickland Towards midday on a perfect Sunday morning in June 1962, I was arrested, With hundreds of other demonstrators, out- side the air force base at...

The history of the Beard is a terrible record of male folly. If some inhabitant of a superior sphere were called down to hear the case, as in Leigh Hunt's apologue the angel is...

Part three of the competition appears this week on page 42.

Vernon Noble I t has yet to be seen whether authors who are accustomed to writing directly from their typewriters will become as creative and comfortable with a word processor....

Shotgun Allianz for Eagle? Jock Bruce-Gardyne S o we shall not have long to wait to see the colour of Mr Norman Tebbit's cards. Will he refer the rival bids for Eagle Star —...

The Spectator is offering a special student rate for a 38 week subscription — to cover three academic terms and two short vacs. — for only £10.95 — giving students a saving of...

Paul Johnson J ournalists will fi nd Harry Evans's Good Times, Bad Times a rattling good yarn. It is too detailed and technical for the general reader but all of us in the...

Sir: Discussing how politicians are resistant to change, Colin Welch says (Centrepiece, 29 October — `Myths and realities'): `Politicians assume with Hegel that what is is...

Sir: How sad and succinct is Brocard Sewell's description (book review, 22 October) of the present state of Roman Catholicism. It is, as he suggests, now more confused than...

Sir: I suppose one of my tender years should be content to be described as a man- darin by Colin Welch (Centrepiece, 29 Oc- tober). But somehow I cannot leave it at that. I feel...

Who loved Germany? Sir: In his review (29 October) of Nicholas Mosley's life of his father, A. N. Wilson remarks that 'any reasonably cultivated Victorian or Edwardian...

As Mr Ingrams knows, I do not often find value in his TV columns. However, may I warmly support his comments on Aeschylus (15 October)? But there is a further point, not made...

Sir: As a viewer who watched with great interest what

Richard Ingrams described as `this ridiculous production' — the Oresteia of Aeschylus — I feel I must comment on his so-called criticism. If Mr Ingrams did not know that...

Poor Grenadine Colin Welch T he respectability of Mr and Mrs Ernest Britt is imposing but fragile. Their desirable Elizabethan-style residence is, so to speak, of glass, built...

Elizabeth Jennings The Oxford Book of Dreams Chosen by Stephen Brook (O.U.P. £8.95) in reams. How resonant the word is, how it rings down the centuries, a magic sometimes,...

Richard West Djilas: The Progress of a Revolutionary Stephen Clissold (Temple Smith £15) W hen the Yugoslav Communist Party, in 1936, was crushed by a wave of arrests, and its...

Christopher Hawtree Mae West is Dead Edited by Adam Mars-Jones (Faber & Faber f10, £3.50) I t would have made a more interesting piece of television than books usually receive...

Bohdan Nahaylo The Day Lasts More Than A Hundred Years Chingiz Aitmatov (Macdonald £8.95) H ow little we know about the vitality I land aspirations of the numerous non- Russian...

Return of a native Julie Kavanagh Lindsay Kemp described as the original aim of Facade: `to (Sadler's Wells) obtain an absolute balance between the volume of the music and the...

Japanese fan Peter Ackroyd Tokyo Story ('U', Gate, Notting Hill) Tt ,is difficult to know if this film, now lbeing shot again after an interval of some years, will still...

Brought to light John McEwen Art of the Avant-Garde in Russia - selections from the George Costakis Collection (Royal Academy till 13 November) The 1st Russian Show — a...

The collaborator Richard Ingrams I have to be careful what I say about A Harold Evans as the fellow has a nasty habit of suing for libel, an aspect of the great crusader for...

Balls-up Taki New York Fr he April in Paris Ball, as everyone 1. who's ever heard of Elsa Maxwell knows, always takes place during October, and right here in New York at the...

Dessert ,island Jeffrey Bernard T he business of being shipwrecked on a desert island is something that has in- trigued me ever since Roy Plomley started his radio programme...

Shocks P. J. Kavanagh D uring the Korean war I briefly found myself the only Englishman in an American military hospital. In the ward the radio was on all the time, tuned (I...

No. 1294: Old Nicola Set by Jaspistos: Recent discussions about the femininity of God have ignored the possible femininity of the Devil. You are in- vited to provide a poem...

No. 1291: The winners Jaspistos reports: Competitors were asked for

a rough resume of the plot of a Shakespeare play such as might have been attempted by (a) Mr Jingle (b) Bertie Wooster or (c) a Damon Runyan character. Thank you all for a...

A prize of ten pounds will be awarded for the first correct solution opened on 21 November. Entries to: Crossword 632, The Spectator, 56 Doughty Street, London WC1N 2LL. 1 2...

Things to come Raymond Keene T t was a frustratin g feelin g last Friday to Isee my column appear without precise in- dications as to whether London would sta g e the...

leven nations voted in favour of a resolution of the UN Security Council deploring the invasion of the island of Grenada. Britain, Zaire and Togo abstained, and the United...

with Dame Edna Everage Hello Possums! It's not often 1 laugh out loud . at a cartoonist's work. It's not often that a magazine, periodical or publication slides from my...

if you missed the previous weeks' issues, it is still possible to enter the competition. Bac k numbers are available from: The Spectator , Competition Back Numbers, 56 Doughty...

1, Dame Edna Everage will introduce one question by a different person in each issue of The Spectator from now until the 10 December issue. 2. Do not send in your replies each...