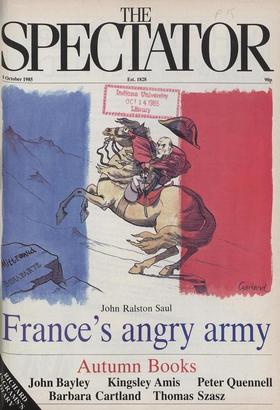 The phoenix T he United States officially welcomed a Soviet proposal for nuclear arms reduc- tions made in a letter from Mr Gorbachev to Mr Reagan, delivered to the White House...

THE Head Masters' Conference has been told that the education that its members provide is too specialised. The news value of this storm stands just higher than `Bishop Denies...

THE euphoria over the sale of 132 military aircraft, principally Tornados, to Saudi Arabia — £4 billion in cash and oil, 25,000 British jobs prolonged — does not include the...

TORY OPPORTUNITIES M r Neil Kinnock has been courageous, and to some extent successful, in turning the Labour Party away from self-pitying ideological introspection and towards...

WHEN a British soldier negligently dis- charges a firearm, he is liable to a fine amounting to a maximum of 28 days' gross pay: it is not uncommon for a soldier serving in...

In his Diary this week, Richard Ingrams suggests that the

price of the Spectator reflects 'how few people nowadays buy the magazine'. This gives us an excuse to announce our Audit Bureau of Circulation figure for January-June. This was...

Has Mr Kinnock done a Gaitskell at last? FERDINAND MOUNT Bournemouth e ll , ell, the outer circles at least, must be rather like getting into the Bournemouth International...

RICHARD INGRAMS R eturning to the pages of the Spec. after a short absence I feel rather like a man going back to his old school — a bit superior on finding that most of his...

Can socialism survive in the Soviet state without vodka? I t is no earthly use pretending that any problem in Britain is anything like as serious as the drink problem in the...

THE MALAISE THAT THREATENS FRANCE

John Ralston Saul on the French army's determination to exercise political power in the wake of the Greenpeace affair Paris YESTERDAY is today forever. Not since the putsch of...

Stephen Robinson on Afrikaner calls for a tougher policy than Mr Botha is following Beaufort West, Karoo WHEN they speak of 'the crisis' in this part of the country, farmers...

A noble life ended on Thursday, when Lord Shaftesbury died at Folke- stone. He was one of the very few men of whom it is easy to say with certainty that the world was the better...

Christopher Hitchens on Irish - American resistance to a new extradition treaty with the United Kingdom Washington `WHAT about Lord Mountbatten? That's an example — he's...

Social workers, under attack over cases of child abuse, need a new ONCE upon a time I knew a witch in Glasgow. She was a dumpy blonde girl of no very obvious charms who smelt,...

P. P. McGuinness on the lessons from Australia which Labour is bound to misapply THE policy inputs coming from the shad- owy advisers in Labour Party Headquar- ters and in...

THE SPECTATOR GAME OF CONSEQUENCES

Who met whom and where? Prepare to meet the challenge in this year's competition and win fabulous prizes. Details next week.

Chris Goodall argues that this Government's industrial policy is as mistaken as its predecessors' THE much-publicised problems of STC, Thorn EMI and Sinclair Research,...

Peter Levi on the robust traditions of Ionian cricketing THE STRAY football teams from the British Navy that used to play the natives when there was nothing else to do could...

THE WAR OF THE WORDS

The media: Paul Johnson on the latest verbal weapons of socialism Bournemouth LABOUR Party conferences serve one useful function. They keep us wordsmiths informed on what new...

Sir: Cinemas with Wurlitzers which ascend in devilish majesty from the pits of the orchestra may have practically vanished in the Thames Valley, as Valerie Grove asserts (Diary,...

Sir: Please accept my thanks for publishing Miranda Seymour's perceptive review (27 July) of Fontamara in Eric Mosbacher's translation of the post-war revised edition. Of course...

Sir: Your note on varying newspaper cover of the horrible attack on an Asian family in Newham (`Burning hatred', 20 July) re- minds historians and others that they can no longer...

Sir: Roger Thompson of NELP (Letters, 14 September) suggests the Architectural Association is spendthrift, in that its costs have multiplied threefold since 1978-9, whereas...

Sir: In his otherwise enjoyable review of Norman Lewis's autobiography Jackdaw Cake (Books, 28 September), Auberon Waugh makes rather heavy weather over the non-existence of a...

There is an old pond. When a frog jumps in He makes the water cry out. A sporting form John Bayley THE OXFORD BOOK OF SHORT POEMS chosen and edited by P. J• Kavanagh and...

Peter Quennell EVERY PICTURE TELLS A STORY: IMAGES OF VICTORIAN LIFE with a commentary by John Hadfield The Herbert Press, f10.95 V isiting the annual exhibition of mod- ern...

The pretensions of the Freudian cult

Thomas Szasz ACTS OF WILL: THE LIFE AND WORK OF OTTO RANK by E. James Lieberman Collier/Macmillan, f28,95 I ntended to rehabilitate Otto Rank as a 'great analytic innovator',...

So far a happy ending

Francis King THESE GOLDEN DAYS by John Braine Methuen, f8.95 I t is presumptuous of a reviewer to assume that, if a novel is written in the first person, then the narrator...

Kingsley Amis HUMMINGBIRDS AND HYENAS by Edward Pearce Faber, £4.95 A t first sight this is a most welcome publication. Unfortunately that first sight goes no further than...

Edward Mortimer ALL FALL DOWN: AMERICA'S FATEFUL ENCOUNTER WITH IRAN by Gary Sick I. B. Tauris, £16.50 D espite the crushing array of special studies and policy analyses that...

I've got a job with Poetry Inc. just now: nothing special, nine-to-five. One day is much like the next. But the discipline is fairly strict, and one has to have something to...

A Hollywood film in Brazil

The irresistible charisma of Elizabeth

Barbara Cartland LEGACY by Susan Kay Bodley Head, £9.95 E verybody reads in a different way, some for speed, some to savour every word. I see everthing I read and write in...

Sarah Bradford PRE-RAPHAELITE SISTERHOOD by Jan Marsh Quartet Books, £18.95 I t was, I suppose, inevitable that a feminist art historian should have come up with the idea of...

Buying for the wrong reasons

James Fergusson HOW TO BUY RARE BOOKS: A PRACTICAL GUIDE TO THE ANTIQUARIAN BOOK MARKET by William Rees-Mogg Phaidon/Christie's, R etiring to run a secondhand book- shop is...

A. N. Wilson A HAWK AMONG SPARROWS: A BIOGRAPHY OF AUSTIN FARRER by Philip Curtis SPCK, f20 A ustin Farrer was the chaplain of Trinity College, Oxford from 1945 until 1960,...

in name only Peter Phillips O n one of the many dark evenings which shortly preceded Christmas last year, the editor of this column and I were sitting ruminatively by an...

The non-news headlines Noel Malcolm I t has been a thin month on the radio, made even thinner for me by a brief but altogether wirelessless holiday. I missed A Private Grief,...

Camila ('15', Curzon, Mayfair) Long ago and far away Peter Ackroyd T his is a film bathed in the milky luminescence of the past; it is set in mid-19th-century Argentina, it...

Talking points Peter Levi T he managers of television are not untalented, just unimaginative. They go on chipping and polishing from year to year until they arrive at an...

Cast of villains Taki New York ell, I never made it as far as Tokyo. All that training and worrying went to waste. A bureaucratic hitch kept me out of Japan and the world...

Tear- jerker Jeffrey Bernard T here were some oddballs in my flat last Saturday night to watch the Barry McGuigan v Bernard Taylor fight on the box. Gino, an unemployed...

Wee, tim'rous beasties Alice Thomas Ellis I will put enmities between thee and the woman, and thy seed and her seed: she shall crush thy head, and thou shalt lie in wait for...

P.J. Kavanagh is in Canada.

Alekhinesque Raymond Keene K asparov has equalised the match by obliterating Karpov in a game played in the style of Kasparov's hero, Alekhine: Kasparov — Karpov: Game 11, 1...

Conjugation Jaspistos I n Competition No. 1389 you were asked to supply 'conjugations' after the pattern of: I am tolerant. You are permissive. He has no morals. This drew...

Pt j ol i ti j o RL , • I HAVE a little collection of cook books to bring to your attention. They seem to appear weekly: these are just a few you might be interested in. There...

You are invited to write an 'Echo' poem (maximum 12 lines). The first line of each couplet should be in the form of a ques- tion, the second an answer by a monosylla- bic,...