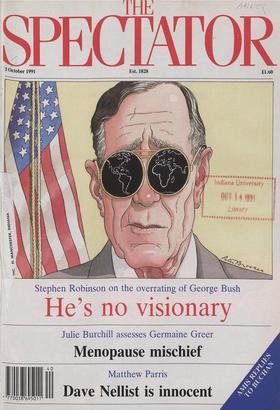 Caught in flagrante delicto in Brighton. A leak to five Conservative newspap- ers, on the eve of Mr Kinnock's address to the Labour Party conference, revealed his decision to...

Fiihrerprinzip: nothing happens in the Labour movement except that which Mr Kinnock wishes SIMON HEFFER intention, when he made it known that no election would be held next...

I t has always been my dream to write The Spectator diary. Why? I hear you ask. I've turned down Wogan three times. Told Andrew Neil twice that he couldn't afford me. Been...

The Government thinks it is all right to persecute people who obey the law CHARLES MOORE t seems to be a convention of current politics that it is rude to discuss anything...

Stephen Robinson argues that George Bush's foreign policies are over-estimated, and unsuited to the new world order Washington AH FINALLY some vision, and the relief is...

A POOR KIND OF DEMOCRACY

Noel Malcolm on the conspiracy theories which corrupt Rumanian politics Bucharest AN OLD joke has it that in any room containing three Rumanians you will find at least four...

RED BUT NOT DEAD

Stephen Handelman writes that reports of the demise of the Soviet Communist Party are premature Moscow BEHIND a plain white door with the inscription 'Inspectorate of Youth...

In Mark Almond's piece last week we named the former

KGB head as Khrus- chev. He was, of course, Kryuchov.

ONCE more a cab-distance recorder is declared to have been perfected. The Times of Tuesday describes it as a dial fixed inside the cab, on which the number of revolutions made...

Matthew Parris says there is no case at all for expelling Dave Nellist from the Labour Party Brighton FOR THE British public and the tabloid press, the Labour leadership's...

JUSTICE FOR THE JUDGE

Fenton Bresler resents the campaign of vilification against the man who sentenced Derek Bentley ON FRIDAY a 'brilliant new film' — to quote the Daily Express — opens in...

A reader saw this notice in a hotel bedroom: RAMADA® HOTEL WIEN ENGLISH Splendid, to have you as a guest. A warm welcome. The RAMADA HOTEL VIENNA, in the name of the staff...

MEN OF MANY AND FEW WORDS

Ross Clark finds that the top Scrabble players have an inarticulacy all their own HAVING gone to the trouble of memoris- ing 10,000 words in four months, David Boys, a...

I DREAD the arrival of the hospital postman. He always brings large manila envelopes containing long circulars from the bureaucrats who pullulate in the halls of the Health...

What became of the Game Chicken? PAUL JOHNSON B oxing is a brutal and often dishonest business — it is not, and never had been, a true sport — and its survival as a lawful...

Searching for talent, directors scratch their heads and each others' backs CHRISTOPHER FILDES C hairmen are like bishops. There are hundreds of bishops of every persuasion,...

WHO says you can't take it with you? John Major is offering tax relief to the dead. Until now, their part in British political life has been marginal — in Northern Ireland,...

FRANCE first and the rest nowhere. When the International Monetary Fund meets in Bangkok this month, Michel Camdessus can look forward to another five years in charge. Not that...

HEAVEN protect us from well-meant protection. The Rent Acts gave tenants less choice, and the Financial Services Act is now doing the same for buyers of insurance. The banks and...

I SUGGEST peace terms for the battle of the books. What we need is a Common Literary Policy. This would supersede the Net Books Agreement, which lets pub- lishers fix the sale...

Sir: As someone who is not a member of Opus Dei but whose regular confessor is, may I comment on your article 'Beating a path to sainthood', 28 September? Unlike the gentleman...

Sir: Nothing in my book can compare with the blasphemous cuteness, and robust vul- garity, of your front-page headline (28 September): 'Designer gas ovens'. As for your...

Sir: Sir Ian Gilmour's 'stately rebuke' to Andrew Lycett (Letters, 28 September) for his article, The sad decline of a stately pile' (21 September) was an unworthy contribu-...

Sir: The anonymous writer of the profile on Lord Carrington (The charming chairman', 28 September) reveals himself as somewhat small-minded and humourless. The end result is...

Sir: You are a little unkind (Diary, 28 September) about Lord Bottomley's obitu- ary notice of Earl Attlee in the Independent (14 September). Although there is a vivid (and some...

Sir: 'Old Friends', though doubtless wittily intended, was, I fear, a rather inaccurate heading for the singularly humourless piece of schoolboy graffito you allowed to scrape...

Sir: A recent review by me of two books on Sir Yehudi Menuhin (7 September) con- tained a number of more or less unfortu- nate misprints. One proper name is mis- spelt, and I...

Sir: I read the first paragraphs of Dominique Jackson's article on recession- hit prostitutes with mounting amazement. If 'Candy' really is plying her trade in the Brompton...

Evolving in his altered soul Christopher Bray DARWIN by Adrian Desmond and James Moore Michael Joseph, £20, pp. 808 A t the beginning of 1836, over four years into his...

Harriet Waugh THE GATES OF IVORY by Mar g aret Drabble Viking, .£14.99, pp.320 W ith The Gates of Ivory, Margaret Drabble has reached the end of her long trilogy started in...

No, but I'll see the mini-series

Tom Shone PARADISE NEWS by David Lodge Secker, .£14.99, pp. 223 A writer who has his book adapted for television is often considered more sinned against than sinning. The jury...

Andrew Brown MURTHER AND WALKING SPIRITS by Robertson Davies Sinclair-Stevenson, £14.95, pp. 357 There was an Old Man with a beard Who said, 'It is just as I feared! — Two Owls...

Seeing things in black and white

Rosalind English AN ACT OF TERROR by Andre Brink Secker, £14.99, pp.827 A idre Brink's latest novel is not one book, but two. I suspect that the second book, a quarter of the...

The gardener was a myopic frump

Fiction: Brief Lives by Anita Brookner, Penguin, £5.99 The Gate of Angels by Penelope Fitzgerald, Flamingo, £4.99 The Inn at the Edge of the World by Alice Thomas Ellis,...

The return of Everyman

Antony Lambton A comet has hit the literary world and should worry London's cosseted and in- efficient publishers. David Campbell has revived the Everyman Library with an...

A collector of wit and beauty

Peter Quennell A PASSION FOR FRIENDSHIP: SYBIL COLEFAX AND HER CIRCLE by Kirsty McLeod Michael Joseph, £20, pp. 180 D uring the pre-war years, if Osbert Sitwell and his friends...

In the late autumn when my sister died Spiders netted the chrysanthemum-beds. Cutting tall flowers for the All Souls market, Her hands moved tender among golds and reds. It's...

Crafts The Surrey Peasant H aslemere today does not seem the most likely site for a series of arts and crafts and rural revival experiments buoyed up by a loathing for urban...

A Woman of No Importance (Barbican) Mocking the bourgeoisie Christopher Edwards I t is hard to resist quoting some of the best of Oscar Wilde's remarks when reviewing his...

Noh concessions Deirdre McMahon T he timelessness of Japanese Noh Theatre is brought home to a British audi- ence when one reads in the programme for the Umewaka Kennokai...

Big top perversion Joanna Coles questions the ethics of an alternative French circus T he human blob, a limbless creature — merely a tiny head and torso — rides round and...

Richard Eurich: from Dunkirk to D-Day (Imperial War Museum, till 12 January) Marginalised masterworks Giles Auty A ny who feel their overview of British painting during this...

An exhibition of the original artwork for Spectator covers by

Peter Brookes and Nicholas Garland opened at the Cartoon Gallery, 44 Museum Street WC1, on 4 October. It continues until 19 October.

Let Him Have It ('15', Odeon Leicester Square) Life and soul Harriet Waugh T his is a wonderful and curious film. Taken from a novel by Roddy Doyle, whose latest novel, The...

It must mean something Martin Gaylord J ust what is it that makes jazz so differ- ent, so appealing? A great deal of ink has been employed in efforts to define the essence of...

Natural ingredients Martyn Harris I have a theory about TV food shows, a sub-clause of Murphy's Law probably, which states that the higher the quality of the cookery...

The vast tycoon Taki Athens h ehe only person I've ever heard say something nice about Robert Maxwell was his daughter Ghislaine, and that was direct- ly after I asked her if...

Breaking old bones Jeffrey Bernard o should I bump into last week but She who would once drown in my eyes. She hasn't changed much. She still looks like a walking, talking,...

."-zz At•.trts I HAVE never written about Rules: John Mayhew,

its proprietor, is a friend, and for entirely friendly reasons he has sought to protect my critical integrity by banning himself from these pages. But the other week one of...

Queens' side Raymond Keene C hess has traditionally been a male preserve. Although men dominate the game there is no particular objective intel- lectual or physiological...

SCOTCH WHISKY COMPETITION 12 YEAR OLD SCOTCH WHISKY Biography Jaspistos I n Competition No. 1696 you were in- vited to compose a sonnet whose first line was either ' A...

A poem, please (maximum 16 lines), addressed by oneself to the other self in the mirror. Entries to 'Competition No. 1699' by 18 October.

Twickenham revisited Frank Keating MY DAD had a passion for the public prints. He seemed to take the lot, from the Telegraph to old Reynolds News. In those days a single...

Q. My 70-year-old parents inherited a size- able sum of money from a great aunt two years ago. Unfortunately they have appalling taste and, instead of spending the money on...