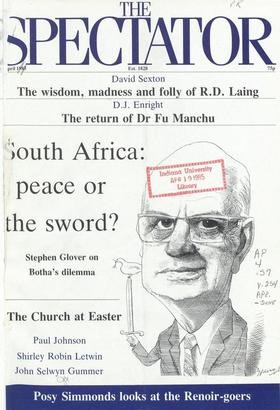 Portrait of the week A n inquiry was announced into

the way 1 - 1..in which Maurice Beckford had been able to starve, torture, and finally beat to death his four-year-old step-daughter Jas- mine in Brent. He was sentenced to ten...

The end of 'civilisation'? Charles Moore 4 A seamless robe.' To most of us, in r - kHoly Week at least, the phrase is a reminder of the Passion. But in Shepherd's Bush and...

T he dull young things of the Federation of Conservative Students have brought to the Right the manners and style of the polytechnic Left. They seem to care about politics,...

Scots on the rates

A t about this time in every Parliament it is said that there will be no Con- servative seats in Scotland after the next general election. There is always some- thing â oil,...

M aurice Beckford, who battered to death his four-year-old step-daughter Jasmine, has been convicted of manslaugh- ter and jailed for ten years. Beverly Lor- rington, Jasmine's...

A public school may, in fact, be private but a public building is one dedicated to the public use. It may even have been designed to be enjoyed by the public. This is certainly...

A glorious kedgeree Auberon Waugh A ll human life seemed to wander through the Lime Grove studio of Breakfast Television when I sat there for two and a half hours last week in...

W hat on earth has happened to the Video Recordings Act? It began life as a Private Member's Bill as far back as 1983, received Royal Assent last July and is now waiting on the...

Peace or the sword? Stephen Glover M r P.W. Botha, President of South Africa, has somehow been trans- formed from a man who believed that his fellow countrymen should 'adapt...

Rowlinson Carter Santa Carolina, Mozambique M r Tiny Rowland will be surprised and, one hopes, pleased to learn that among the population of this small island in the...

Stan Gebler Davies T he question whether Ireland would be better off with or without the Church of Rome has exercised the island for the last several centuries, with civilised...

Living with the angels

Anna Husarska Managua, Nicaragua T o suggest that Managua has a cathedral would be slightly inaccurate. Managua had a cathedral and now it has a building called the cathedral,...

Harry Eyres W hen terms were agreed last week for the entry of Spain and Portugal into the EEC, the Spanish Foreign Minister, Senor Moran, expressed his jubilation: `Now at...

W hen the new Curator of Sir John Soane's Museum assumed his duties last year, he found that the only piece of equipment in his office was a copy of Who's Who â the 1946...

w ho owns the rights in the Ritz? The Al-Fayed brothers, owners of the Paris Ritz and now of Harrods, are busily pursuing their claims against American multinational companies...

A Budget for growth

S omebody likes the Budget. I now have a broker's circular which calls it bold and innovative: 'Abolition of Estate Duty, Interest Tax, substantial reduction of in- come tax...

T he Bigger Fool Theory of investment has seldom had a better run than with the United States dollar. On this theory, you buy something, even though it looks expensive ('on the...

New Jobbed Shock rr here is always one set of official figures that sets the market twitching, and they are always awful. It must be part of our national character. When the...

A media church? Paul Johnson E aster is upon us, the climax of the ecclesiastical year. When I was a schoolboy, the Wednesday of Holy Week saw the last of the four great...

General Grant, who has been dying for months of that most terrible of com- plaints, cancer of the tongue, was on Thursday evening not expected to live through the night. His...

Sir: Horace Budd would enjoy being re- membered in the Spectator (Letters, 9 March). I knew him for some years before the war. A great talker and teacher, he introduced me to...

Sir: I have read with interest Andrew Brown's thoughts on the miners' strike and the descriptions of his David Attenborough-like visits to the primitive village of Hemsworth...

Sir: Your editorial and letters pages (9 March) have recently taken to accusing this city of being uncivilised because of an alleged lack of secondhand bookshops. In Birmingham...

Palestine: whose country? Sir: Writing of Joan Peters's From Time Immemorial, Lionel Bloch (Letters, 23 March) says that we 'catalogued some weeks ago in the London Review of...

Chesterton at his worst

Sir: As a lover of G. K. Chesterton at his best, I wish that David Watkins's argument (Letters, 9 March), that his anti-semitism, largely an infection from Belloc (and his own...

Sir: Shiva Naipaul (Books, 23 March) reviews Alice Wexler's biography of Emma Goldman from a position of blissful ignorance. Whatever he may suppose, anarchism does 'really...

Sir: Is there some way in which you could persuade the excellent Peter Phillips to look after Christopher Edwards for a bit? The choral music opening Bristol Old Vic's Richard...

Sir: Priscilla Metcalf (Letters, 30 March) obviously did not have the advantage of the composer of your amusing ballad on an Engineers' Corner in Westminster Abbey, that of...

Protected by memory Colin Welch T he New Statesman recently published a piece celebrating Denis Healey's new lease of life. We were told how this gifted man had recaptured a...

An owl heard, but not seen; our unwild doves Told us of him by never coming back. It was an owl, we said, or else a hawk, When, absent in the morning, at noon too, Absent by...

Take the apple from the bowl or bough Or kitchen table where in gloom it glows And you will sense, mysteriously, how Its fragrance and substantial presence throws A shadow shape...

The Heroic Age Stratis Haviaras (Methuen Â£8.95) 4D on't let us get at cross-purposes in small ways,' Churchill urged Stalin at 'a moment apt for business,' according to...

Is this how God thinks? Shirley Robin Letwin The Divine Trinity David Brown (Duckworth Â£24) T he usual response of conservative Christians to the present state of...

From Maynooth to Melbourne

Edward Norman Daniel Mannix: The Quality of Leadership: a Biography B. A. Santamaria (Melbourne University Press Â£25) A little under ten years after the death of Archbishop...

John Selwyn Gummer Firmly I Believe and Truly Graham Leonard (Mowbrays Â£1.95) W e are obsessed by our hunt for the bizarre. One sniff of heresy will arouse our appetites...

The return of Dr Fu Manchu D. J. Enright A rthur Henry Ward was born in 1883, of Irish parents living in Birmingham. He worked very briefly as a bank clerk in Threadneedle...

Seen in the Oak

I watch through the branches Of the oak tree, at the sky Twinkled there between the leaves, Blue stars cut out, twinkling. Look, There's Orion lying on that branch, The Big...

Music and movement Peter Phillips T he return of Holy Week puts me in mind of Allegri's Miserere â that famous setting of Psalm LI which for 150 years the papacy jealously...

Within limits Christopher Edwards After the Ball is Over (Old Vic) Up 'n' Under (Fortune) W illiam Douglas Home (born 1912) once again cordially invites you to enter the world...

Running down Peter Ackroyd Favourites of the Moon ('15', selected cinemas) Tt is odd, perhaps, that such an apparent- ly 'French' picture has in fact been directed by a...

Temple to Mao Alistair Hicks jenom, vitriol and cries of corruption V have plagued the Saatchis in their desire to collect pictures. The advertising team of the Saatchi...

Jobs not to do Ursula Buchan T he enjoyment of life, as someone must once have said, depends upon coming to terms with the gap between aspiration and achievement. Most...

Snowman Taki Gstaad T sometimes think God must be in my lcorner where snow conditions are con- cerned. Take for example the winter that has mercifully just passed. Throughout...

Jeffrey Bernard will resume his column next week.

Dai the Paint P. J. Kavanagh orn in 1818, David Davies worked in LA his father's sawmill and so acquired his first nickname, 'Dai the Top-sawyer'. Then he broke into business,...

No. 1366: Macspaunday Set by Jaspistos: Macspaunday was the `portmanteau' name (MacNeice, Spender, Auden, Day Lewis) invented by Roy Campbell to personify the worst aspects of...

Jaspistos reports: Competitors were asked for a story for young children cheerfully inculcating a cheerless lesson appropriate to the modern world. I don't know what the upper...

`L' driver Raymond Keene A s promised, I continue this week with a round-up of major events previously crowded out by the World and Common- wealth Championships. In Lugano,...

Solution to Crossword 699: Courtship an A P

A first prize of Â£20 and two further prizes of Â£10 (or a copy of Chambers Dictionary value Â£11.95 â ring the words 'Chambers, Dictionary' above) will be awarded for the...

T have no idea how the rabbit got into 'Easter: pagan fertility stuff or Walt Disney cuteness? Whatever the reason, my feeling is eat it. The following receipt has the...