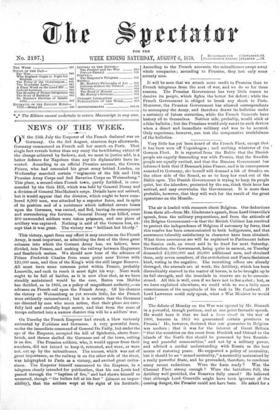 It will be seen that we attach more credit to

Prussian than to French telegrams from the seat of war, and we do so for these reasons. The Prussian Government has very little reason to deceive its people, which fights the...

The debate of Monday on the War was opened by

Mr. Disraeli in a powerful, though partizan, and at one point fantastic speech. He would have it that we had a locus standi in the war of 1866, because in 1815 we guaranteed...

Very little has yet' been heard of the French Fleet,

except that it has been seen off 'Copenhagen ; and nothing whatever of the German Fleet. It is reported from the Baltic that the Danish people are eagerly demanding war with...

This victory, apart from any effect it may exercise on

the French Army, is most important, as admitting the first of the three great columns into which the German Army has, we believe, been divided, into France, and making the...

The air is loaded with rumours about Belgium. Our deductions

'V The Editors cannot undertake to return Manuscript in any

On Tuesday the French Emperor had struck a blow variously

estimated by Prziiiians and Germans. A very powerful force, under the immediate command of General Be Failly, but under the eye of the Emperor, occupied the hill of Spicheren,...

O N the 15th July the Emperor of the French declared war on Germany. On the 3rd August, nineteen days afterwards, Germany commenced on French soil her march on Paris. That...

The Austrian Government has officially announced that in consequence of

the promulgation of the dogma of Infallibility, the Concordat has been cancelled, and is no longer valid. A con- cordat being a treaty, the Emperor can terminate it, but bills...

Mr. Gladstone in reply did not make the distinct declaration

demanded of him, but after admitting that the war had taken him, and the French Ministry too, by surprise, and briefly recapitulat- ing the negotiations preceding the war, he...

So rapid is modern war, that even the authorship of

the Draft Treaty is slipping out of sight. We must not, however, omit to record that while the French Government continue to affirm that the treaty was suggested by Count von...

The evacuation of Rome is being rapidly carried out, and

within the coming week the last French soldier will have quitted Italy. The terms of the evacuation are still uncertain, but according to most trustworthy accounts the Italian...

It was, however, said on the following day by Earl

Granville, in answer to a strong speech from Earl Russell in favour of defend- ing Belgium. The old Whig statesman delivered his best speech of late years, rising into something...

It is very difficult to understand the tone of Count

von Bismarck towards Great Britain. He is, to begin with, very angry because we export horses, coals, and cartridges to France, and demands that we put a stop to those breaches...

Mr. Childers on the same day gave a most satisfactory

account of the Fleet, which appears to be admitted on all hands as correct. 1Ve have 40 ironclads, all of great, and some of tremendous power, and carrying 546 guns of seven...

In the Commons, on Monday, after Mr. Gladstone's speech, Mr.

Osborne made a vigorous onslaught upon the reserve of Government. As to the Draft Treaty, "the guilt of its concoc- tion was only equalled by the shabbiness of its concealment."...

The Lords' version of the Married Women's Property Bill has

been accepted by the Commons, and may be considered passed. The new Bill would in a clumsy sort of way protect women's 'earnings, if the poor ever read Bills, and even their...

The St. Paul Press states that the Red River insurgents

have completely given in. They consider that the Bill constituting their settlement a province under the name of Manitoba with full representation concedes all they want, and...

The English Press has been too much for the Generals.

The King of Prussia himself has taken Mr. Russell with him, and the Emperor of the French has released the correspondent of the Standard, has declared that lie trusts in the...

Mr. Bruce has withdrawn the Lectionary Bill, and the Times,

for some reason or other, is very angry. It says the Bill was ?universally approved, and that "it is too bad to be compelled to listen in church not only to tedious recitations,...

Consols were on Friday evening 88 to 89.

The French Government is determined to teach Germany what it

has to expect if it is beaten. In its Tuesday evening edition the Journal Olficiel contains an article declaring that France is not at war with Germany, but with the policy of...

A telegram has been received in London from Lisbon asserting

?that Ferdinand, the ex-King of Portugal, has accepted the Spanish Crown. No complete confirmation of this statement has yet been received, but it is believed in many quarters,...

No intelligence whatever about the War has arrived in London

since the Prussian official telegram about the victory at Weissen- - burg. A telegram from Paris, dated August 5, specially remarks that no news from the front has reached that...

The new Foreign Enlistment Act, which passed its second treading

in the Commons on Monday, greatly improves the old Act, but we doubt whether it is even yet stringent enough. It -enables the Government to prohibit the building as well as the...

The country gentlemen are dreadfully concerned about the exportation of

horses. Mr. Lowther on Wednesday complained that about 1,000 horses were exported a day, and on Friday Sir Harry Verney again brought up the subject. It appears, however, from...

'Change seems to have got over its panic, and prices

are becom- ing steady, though, of course, they are still low. The losses in the " House " alone from the recent panics are said to reach two millions, and the losses to the...

The United States' Court of Vermont has condemned General the

Fenian leader, to two years' imprisonment for violat- ing the neutrality laws. The Government of Washington appears -throughout this business to have acted with the most...

THE WAR. T HE delay is over at last, and Germany has commenced the invasion of France. While the Emperor was wasting time in a scenic attack on an open town, held by a...

WHY WE OUGHT TO FIGHT FOR BELGIUM.

T HE Policy of the Ministry in this crisis is intelligible, cautious, and, in its way, resolute ; but, like the speech in which the Premier announced it, it lacks something...

A ROYAL Commission reported a couple of years ago on "the character, working, and effect of the laws of this. realm available for the enforcement of neutrality during the...

" f RISH LAND BILL :—The Lords' amendments were con- '. sidered and agreed to :—The Royal Assent was given by commission to the Irish Land Bill." With such slight notice in the...

FORTNIGHT ago we touched on the accommodation afforded to Jurors in our Courts of Justice, but the question concerns a much larger body of people. There are many other places...

THE MORALITY OF TREATY OBLIGATIONS.

T HERE is no branch of morals more difficult or more neglected than the moral law which ought to regulate the intercourse of nations, and no division of that law so perplexed or...

I F ever there was a romance in facts and figures, it is the story of Ralahine, as told by Mr. William Pare, in a recently pub- lished volume.* In the year 1830—one of the...

N OW that the Council of the Vatican has declared the Pope to be Infallible when he speaks ex cathedra on questions of faith or morals, it is interesting to note the grounds on...

ESTIMATES OF THE ENGLISH KINGS.

VIII.—HENRY IT is not difficult to state the main characteristic of Henry of Winchester. Without being a fool in understanding, he was (perhaps with one exception) the weakest...

TILE PREMIER AND THE WAR. 170 THE EDITOR OF THE " SPEOTAT011.1 SIR,—There have been two "shocks to confidence." The Draft Treaty was one. It is lamentable that Mr. Gladstone's...

" Louis has had his baptism of fire."—Emperor's Telegram. "How jolly, Papa! how funny ! How the blue men tumble about ! Hama! there's a fellow's head off,-- How the pretty red...

MR. RUSKIN'S PHILOSOPHY OF ART.* [FIRST NOTICE.] Mn. RUSKIN is a man of genius, with a passion for insulting the intelligence of his readers, and this latest of his books...

PREVOST-PARADOL AND THE WAR BETWEEN FRANCE AND PRUSSIA.

[TO THE EDITOR OF THE "SPECTATOR.'] SIR,—In an article on Prevost-Paradol in your issue of last Satur- day the sad end of this distinguished writer is mainly attributed to the...

JUDAISM WITHOUT THE TALMUD.* WE are sorry to have to

say so, but Dr. Rule has produced a very poor and confused work on a very interesting subject. At a time when the great book of traditional Judaism is not only attracting...

WATERLOO.* Wuo really won the Battle of Waterloo, who got

the credit of winning the Battle of Waterloo, and who ought by all the laws of -sound strategy to have been the winner in that great and decisive -conflict,—such are the three...

THE BOND OF HONOUR.*

- WE are indebted to one of our advertising firms for the name -which exactly describes this book. As we hear of machine-made jewellery, so we may say that this is a...

Mn. BINNEY dedicates these sermons to his congregation, as a "small memorial of a ministry of forty years." Eighteen dis- courses, for the volume contains no more, cannot, of...

A Little Book about Great Britain. By Azamat-Batak. (Bradbury and

Evans.)—Every one will have read or heard of the " Turk " who, under this name, gave us in the Pall Mall Gazette the benefit of some of his ideas about our manners and customs...

The Story of Two Lives. By Winifred Taylor. (Nimmo.)—This is

a story, prettily told, of the lives of two women, one a noble lady, the other a poor cottager, who are born on the same day, whose lives are interwoven throughout, and who pass...

her readers with an amazing abundance of incident; and if they do not care about its being in the highest degree impro- bable, and generally inconsequent and absurd ; and...

Fjord, Isle, and Tor. By Edward Spender. (Charlton Tucker.)— These

papers are reprints from the London Quarterly Review and other periodicals. They are sketches, which strike us as being in a remarkable degree practical and useful, of travel in...

The Week of Creation. By George Warington (Macmillan) is a

very able vindication of the Mosaic cosmogony by a writer who unites the advantages of a critical knowledge of the Hebrew text and of distin- guished scientific attainments....

The Student's Manual of Irish History. By M. F. Cusack.

(Longmans.) —We mast know what object the " student " has before him before we can recommend this " manual " to him. If he wants to get a sketch of Irish history from an...

Jessie Grey, by L. G., and Katie Johnstone's Cross, by

A. M. M. (Oliphant), are both called "Canadian tales," though there is not much loeal colour about either of them. The latter of the two tells with some pathos how the weakness...

The Hymnal Companion to the Book of Common Prayer. Edited by E. H. Bickersteth, M.A. (Sampson Low.)—When there are so many hymn-books—the editor has used for this present work...