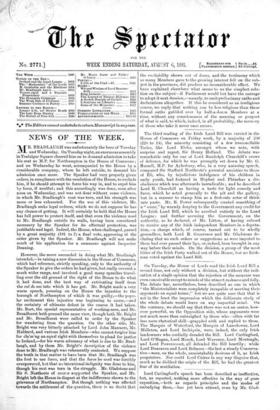 The third reading of the Irish Land Bill was carried

in the House of Commons on Friday week, by a majority of 206 (220 to 14), the minority consisting of a few irreconcilable Tories, like Lord Elcho, amongst whom we note, with...

M R. BRADLAUGH was unfortunately the hero of Tuesday and Wednesday. On Tuesday night, an enormous assembly in Trafalgar Square cheered him on to demand admission to take his...

On Tuesday, the House of Lords read the Irish Land

Bill a second time, not only without a division, but without the indi- cation of a single opinion that the rejection of the measure was even conceivable except to minds of the...

Lord Cariingford's speech has been described as ineffective, but, as

reported, nothing more effective in the way of pure exposition,âboth as regards principles and the modes of embodying them,âhas yet been uttered, even by Mr. Glad- stone ;...

*** The E ditors cannot undettake to return Manuscript in

However, the move succeeded in doing what Mr. Bradlaugh intended,âin

raising a new discussion in the House of Commons, which had reference, strictly speaking, only to the authority of the Speaker to give the orders he had given, but really...

Ayoub Khan has, of course, occupied Candahar,âentering it on July

30th,âbut there, for the time, he seems to be delaying, and it is possible that he will relapse into his idle mood. Abdur Rahman holds Khelat-i-Ghilzai, with one infantry and...

On Monday Mr. Parnell, who appears to have found that

he is thought remiss by the violent party in Ireland, got up a little " scene" on his own account, by persisting in demanding a night for the discussion of the arrests under the...

Lord Powerscourt made a telling speech in favour of the

Bill, and Lord Fortescue a grudging one, admitting that the Bill was required,âwhile the Disturbance Bill, he said, was not,âby the public opinion of the country,âa view...

fiord Lansdowne's speech was, perhaps, the most skilful made against

the Bill. He described the Government as not serious in its intention of making peasant-proprietors, since it esta- blished the tenant so firmly in his holding as a tenant, that...

Tuesday's debate was opened by the Duke of Argyll, in

a 'speech which was certainly below the exigencies of the occasion, and which, so far from justifying his secession from the Govern. ment, rather increases our wonder at that...

The Lords got to work at the Committee on the

Land Bill on Thursday, and passed a good many amendments, some of which the Commons will probably not agree to,âamongst them, for instance, an amendment leaving out the...

The Convention with the Transvaal Republic has been signed, and

the government is to be formally handed over to the Boers on Monday next, August 8th. The Convention has not yet been officially published, but we now know that it contains no...

James McGrath and James McKevitt were tried on Tuesday at

Liverpool for their attempt to blow up the Liverpool Town- hall, were found guilty, and were sentenced to penal servitude for life and for fifteen years respectively,âa...

Mr. Courtney, the Under-Secretary of the Home Office, is to

be the new Under-Secretary for Colonial Affairs, and so to have charge of the Department in the House of Commons,âa con- siderable rise in status, which we have no doubt he...

At the Clothworkers' Company, on Wednesday, Lord Brabourne went in,

And this was indeed the subject of a vehement defence

of Vivi- section, delivered by Professor Virchow, who thinks that it is childish to draw any distinction between the right to put animals to death, and the right to torture...

M. Gambetta went to Tours on Thursday, with no great

.display, and there was apparently some falling-off in the popular enthusiasm of his reception on the route, due, per- haps, to the dissatisfaction with which the peasantry have...

The International Medical Congress met on Wednesday, for the seventh

time, and in London, Sir James Paget being the presi- dent of the year, and delivering the inaugural address. He re- marked on the advantage of getting observations of the same...

IRELAND AND THE LAND LEAGUE. I T is clear, from the reply of Mr. Gladstone on Thursday to Mr. Cowen, that the Government would be very glad if they were able to celebrate, as...

THE " MODERATION " OF THE HOUSE OF LORDS.

T HE House of Lords is going to be as moderate as Mr. Fawcett expected. Lord Salisbury does not advise his followers to throw out the Irish Land Bill, and speech after speech...

M. GAMBETTA AND THE ELECTIONS.

T HE article from the Republique Francaise which the Paris correspondent of the Standard gave at length on Wednes- day, deserves the prominence accorded to it. It is a real...

TENANT-RIGHT AND A PEASANT PROPRIETARY. A MIDST the storm of angry

but ineffectual words with which the House of Lords has thought it worth while to meet the Land Bill, there are passing sentences and detached arguments which furnish matter for...

W E seem to be on the threshold of a new epoch in the revolutionary era. Dangers which have always been supposed to be the peculiar penalty of greatness, and to menace only...

THE WEAK SIDE OF IRISHMEN.

NOTHING strikes us so much, considering the great poli- tical as well as military qualities which the more dis- tinguished Irishmen have shown, as the weakness of their com-...

M SUMMER COOLNESS IN POETRY. ANY years ago, at a large

picnic party, held in Wych- wood Forest, in the heat of one of those summers of which we have just had a reminder, everybody was called upon to invent or quote something...

LONGER LIFE, NOT SLOWER DEATH. (TO THE EDITOR OF THE " SPECTATOR.") SIR, âDr. Granville wisely calls attention to a danger which besets those whose sanitary labours are...

THE EXTENT OF FREE-WILL.

[TO THE EDITOR OF THE "SPECTATOR. " ] SIR, â I have to thank you for the very courteous tone of your comment on may article in the current number of the Dublin Review...

Sin,âDr. Granville's letter leads me to the following reflections. Firstly, that as lunatics can hardly be said either to do good or to have intellectual enjoyment, their...

[TO THE EDITOR OF THE "SPECTATOR. - 1 SIR, âIn your notice of Father O'Leary's paper in the July number of the Contemporary Review, you regard his allegation "that Mr. Bence...

[To THE EDITOR OF THE " SPROTATOR.1 venture to send you a characteristic reminiscence of the late Dean Stanley, of earlier date than that given in your last paper. When he was...

IDYLLS OF THE ILIAD âII. TILE DEATH OF ACHILLES. * THE grey dawn glimmered, and the ebbing tide Slipped from the naked sands about the ships, And drained Scamander of its...

THE LEGEND OF THOMAS DIDYMUS.*

CRITICISM, historical and scientific, one of the most potent forces of the nineteenth century, has so completely per- meated the mental atmosphere of our age, that no depart-...

KING LAZARUS.* WE will begin by criticising the title of

this book. By Lazarus is indicated the French Commune, and this seems scarcely a happy simile ; for, whereas the beggar of the parable was a good man, and eventually entered...

A SCOTCH DISCIPLE OF CARLYLE.*

AFTER reading these discourses with some care, we must confess that we can feel no certainty concerning their author's special object in publishing them, and that we are utterly...

LIBRARIANS ON LIBRARIES.* IT is fitting that the Transactions of

the Library Association should be published in goodly form, and the handsome volume before us does credit to all concerned in its production. The variety of its contents is...

THE leading magazines this month are full of good matter. The contents of the Contemporary Review are, on the whole, the most noteworthy. It opens with a good, but discursive...

SCHOOL BOOKS. Of books on geography, we notice several ; some designed for children of various ages, others to assist the memory of candidates for the Army and Navy...

Saxon describes itself as "a story of the Church and the World," and, indeed, the chief interest of the book, which claims attention rather as a study of character than as a...

from the English Poets. By Henry G. Bohn. (Bell and Sons.) âThis edition of a very useful and carefully-compiled book of refer- ence is a verbatim reissue (with a few slight...