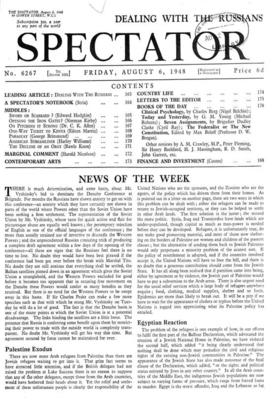 The problem of the refugees is one example of how, in our efforts to fulfil the first part of the Balfour Declaration, which advocated the creation of a Jewish National Home in...

T HERE is much determination, and some haste, about Mr. Vyshinsky's bid to dominate the Danube Conference at Belgrade. For months the Russians have shown anxiety to get on with...

There are now more Arab refugees from Palestine than there are Jewish refugees waiting to get into it. That grim fact seems to have attracted little attention, and if the...

The commission of inquiry into last February's riots in the Gold Coast produces plenty of evidence in its report to show that maliciously minded individuals did their best to...

The Games Get Going

No dire consequences have yet stemmed from the ominous though temporary extinction of the Olympic flame at its bearer's first contact with English soil. French athletes have...

A Turning-Point in Malaya ?

Mr. Malcolm MacDonald's broadcast from Singapore on Tuesday was a lot more reassuring than the loosely optimistic statements about the Malayan situation which have emanated...

Last week's resignation of President Tildy, a member of the vanish- ing Smallholders Party, was one more check to those Hungarians who thought that they would be clever enough,...

DEALING WITH THE RUSSIANS

HE development of relations between Russia and the Western T Powers since the war has been so slow, and so painful, that even the main turning-points are rounded without much...

The Central Electricity Board, to whose advertising methods I called

attention last week, will have to get their whip out if they want to retain their lead in the Vulgarity Stakes. The heroine of the Ministry of Food's latest advertisement,...

S EVERAL readers—all, I think, Europeans—have written to the Editor reproving me for my use of the epithet " Asiatic " to describe recent Russian conduct in Berlin. I see their...

This extract from an article on music in Tuesday's Daily

Worker is just another of those things that make it so difficult for some of us to take the Communist menace as seriously as we ought to: " Because it evolved in pre-capitalist...

The loss of the big French flying boat en route

from Martinique to Dakar calls to mind one of the minor anomalies of aviation in the Caribbean, which is that there is no airfield in the French West Indies, unless you count a...

The English are in some ways curiously bad at looking

after them- selves_ It seems (for instance) extraordinary to me that they have never invented something for the players to do when play in a cricket match is held up by rain, as...

I wonder what proportion of the farmers in this country

pay the Government to kill their rats for them. It is in many ways a very convenient arrangement, and during the war I imagine it was indis- pensable. You give your county...

I claim incidentally to have discovered the perfect, indeed the

only, reading-matter to take with you to a cricket match. It's no good taking a book or a magazine that you want to read, because you can't keep your mind on them, and it's no...

The French West Indies are difficult enough of access anyhow.

They were recently promoted from colonial status to be departements of metropolitan France and the names of all would-be visitors have theoretically to be submitted to Paris...

By EDWARD HODGKIN I N July, 1880, the British Consul General in Beirut reported to the Foreign Office that revolutionary placards in Arabic, attacking Turkish rule, had...

By NORMAN KIRBY T HE narrows of the Iron Gates have long ceased to be a serious obstacle to Danube navigation, but the Iron Curtain has effectively taken their place. The...

ON PITCHING IT STRONG

By C. K. ALLEN T HE letters which I receive from Mexico are few. But when I do get a letter from Mexico, it is of no mean order—as the following will show. Unsigned (for reasons...

By EILEEN MARTIN N every East African newspaper the columns under " Situations I Required " are filled with applications from persons all over the world requiring posts. "...

By GEORGE BRINSMEAD O N August 15th a new era begins in the life of the most secluded of the South American republics. On that day a writer, Natalicio Gonzalez, will become...

By HARLEY WILLIAMS C LIMBING up into the cab was like a steep ascent up the vertical side of a ship, and the most difficult business was to round the top step and plunge into...

By RAWLE KNOX O N the last Sunday in July the first of this summer's barefoot pilgrims moiled their way up Croagh Patrick, and next day a Dublin newspaper that does its bit to...

By HAROLD NICOLSON. A LWAYS, whenever I return to Paris, I pass through two suc- cessive stages of sensation. First comes the delight, forever startled and renewed, at her...

4 , Nightmare Alley." (Plaza.)—"Ride the Pink Horse." (New Gallery.)—" The Pirate." (Empire.) Nightmare Alley sets out to prove, in an original setting, that though you can fool...

THE THEATRE " The Glass Menagerie." By Tennessee Williams. (Haymareet.) IT is odd to reflect that Shakespeare never wrote a play about family life, unless you count The Taming...

THE most interesting of the Proms so far has been the Bach-Hoist concert on July 27th. Ronald Smith played the F minor " piano " concerto quite exceptionally well, thanks to an...

Once again a query has come: bow to replace a dead Macrocarpa hedge. Why anyone should plant Macrocarpa, that tender traitor, passes con- jecture, when Thuja Lobbii, which is...

it is still difficult for your friends abroad to obtain THE SPECTATOR owin g to currency restrictions. Why not take out a subscription for them? Rates : Ordinary edition to any...

AT the date of the Olympic Games it seems suitable to call attention to a claim by a scientific bee-keeper in the United States that honey has a particular and peculiar...

THE most interesting of my last batch of records are two unusual combinations. Mozart's Divertimento K.361 (H.M.V.), is for wind ensemble, and is played by members of the...

" It's another colour now ": within a few baking days the wheats, still in the " yallery-greenery" state, were converted into a rich bronze or, if you will, old gold. A field of...

No weather suits everything. Bees and apples have had as bad as corn and potatoes and plums a good season ; and even a good harvest may have its disadvantages. Plums are too...

Sm,—Strix was perhaps hardly at his best in the first sentence of last week's Spectator's Notebook. " Asiatic," he held, is the fittest epithet for the Russians' unpleasant...

THE ARAB REFUGEES SIR, —The British offer to the United Nations of a contribution towards the relief of Arab refugees whose plight is due to the situation in Palestine has not...

SIR,—I am glad to learn from Mr. Alec Hobson's letter in The Spectator of July 30th that the Royal Agricultural Society is anxious to avoid complacency and welcomes suggestions...

Sta,—Edward Montgomery's Twilight of Truman betrays a touch of naiveté in its assertion that " everybody is against inflation" in the United States. Of course, in theory,...

Snt,—I think all medical practitioners are refusing, for one reason or another, to take certain patients on their lists. Under the Act patients are at complete liberty to select...

the Central Electricity Board for the Switch Family Robinson. Moreover, at the risk of a charge of pedantry, may I say that the main characters in the book whose title is thus...

LET US POST A COPY OF THE SPECTATOR TO YOUR HOLIDAY ADDRESS. Send instructions with a remittance—lid. for each issue—to THE SALES DEPARTMENT. THE SPECTATOR, 99 Gower Street,...

Sta,—In your issue of July 23rd there is an interesting review—under the title Warring Critics—of four recent books. While I entirely agree with your reviewer that one should...

SIR,—Mr. Mills guesses wrong and resorts to abuse. I was writing from experience at many branches, and have found conditions in the provinces even worse than in London. The...

THE B.B.C. AND MINORITIES .

SIR,-1 brought before the League's Council the article by Mr. Harold Nicolson in The Spectator of June 25th in which he maintained that the wireless, when it gives freedom of...

StR,—Your paragraph on this subject in The Spectator of July 30th will be greatly appreciated by all who have the cause of opera at heart, but it contains one important...

Sia,—As a bank employee I feel compelled to comment on

Mr. Frank Ward's allegation, in The Spectator of July 23rd, that the banks are imped- ing the nation's economic recovery. Many banks are short of staff. After a day of...

SIR,—I feel that Colonel Woodhouse, irc his excellent Americans in Greece, may have left the impression that we did little or nothing to restore that country's communications....

• THE SOUND OF WHALES SIR,—" Generally when he had

concluded a period, in the course of a dispute, by which time he was a good deal exhausted by violence and vociferation, he used to blow out his breath like a whale This, I...

Today and Yesterday. By G. M. Young. (Rupert Hart-Davis. 8s. 6d.) WHAT prose the Olympians write, and whether it is better to be lectured on than read, are questions which...

Psycho-Analysis and a Freudian Clinical Psychology : A Case Book of the Neuroses and their Treatment. By Charles Berg. (Allen and Unwin. 25s.) VARIOUS sections of Dr. Berg's...

The Federalist or The New Constitution. By Alexander Hamilton, James Madison and John Jay. Edited with an Introduction and Notes by Max Beloff. (BlackwelL 12s. 6d.) THERE might...

Seven Assignments. By Brigadier Dudley Clarke. (Cape. 12s. 6d.) THERE were times in the war when everything seemed to depend on weight—weight of men, weight of metal, weight of...

With Bartlett to Bangkok

Go East, Old Man. By Vernon Bartlett. (Latimer House. 9s. 6d.) MR. VERNON BARTLETT is what is called a trained observer: a curious phrase, for, although institutions exist for...

THE literature of fly-fishing has always been catholic, but the books written about it tend to gather themselves into two main groups. There are those mainly concerned with the...

The Book of Harrow. By E. D. W. Chaplin. (Staples. 10s. 6d.) HARROW-ON-THE-HILL has always been more than a school. Its spire, to which Charles II is said to have pointed when...

THE first of these books is a collection of essays published at different dates in the journal of the Fell and Rock Climbing Club. The editor exclaims in her introduction, " Why...

Seed of Adam. By Charles Williams. (Oxford University Press. 6s.) MR. O'NEILL seems bent on the pursuit of ugliness and squalor for their own sake. His play is a study of the...

Poems for the Ear

No one who has enjoyed a holiday in the Irish countryside, or been stationed near an Arab village, can fail to be moiled by the thought of how much we miss in England by the...

THE SPECTATOR" CROSSWORD No. 489

[A Book Token for one guinea will be awarded to the sender of the first correct solution of this week's crossword to be opened after noon on Tuesday week August 17th. Envelopes...

SOLUTION TO CROSSWORD No. 487

By CUSTOS IT is odd but true that only after a lapse of three months Sir Stafford Cripps' Budget has begun to produce the results on the Stock Exchange normally associated with...

Nights at the Opera. By Barbara McFadyean and Spilce Hughes. (Pilot Press. 12s. 6d.) DEDICATED " to the men who served in the C.M.F.", this is a guide- book to fourteen of the...