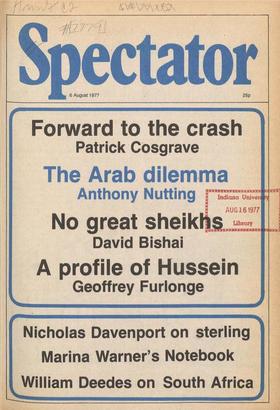 Sir Harold Wilson's relationship with the security services over more than a decade now demands investigation and elucidation. Whether one takes the view that he has set out to...

Who needs the Liberals? Geoffrey Wheatcroft On 27 February 1974 I telephoned my bookmaker to ask about the odds on the following day's general election. What 1 learned about...

Vietnam has only one home-grown religion; the others, Buddhism and Christianity, were imported by conquerors. But the Cao-dai faith was first revealed by its founder in the...

Wealth and the windbags Auberon Waugh When Mr Denis Healey stands naked and trembling at the bar of history, it would be absurd to judge him by the things he has done as...

Nicholas von Hoffman Washington Suddenly the country has taken up an interest in old crimes and ancient injustices. Out of the blue the Governor of Massachusetts proclaimed 23...

A festival in Finland

Rodney Milnes Savonlinna is not really on the international opera-festival map, yet. After two visits I am still trying to work out why. Of course it is expensive, but then so...

Forward to the crash

Patrick Cosg rave The reaction to the final collapse of the Government's incomes policy was not as disheartening as one might have expected, given the mindlessness and the...

Anthony Nutting In an area as volatile and sensitive as the Arab world it is seldom, if ever, easy to take stock of the situation. Any attempt to define, let alone to predict,...

David Bishai Every Sunday my small children go to Sunday school. Our dog, an affectionate Labrador without religious conviction or racial prejudice, stays at home looking after...

Geoffrey Furlonge Few rulers can have come to power in such difficult circumstances as King Hussein. Fewer can have escaped death so often. Fewest of all can have led their...

Team spirit Alan Gibson Although Yorkshire-born, I have much affection for Gloucestershire, where I live (or did before they invented the county of Avon), and was pleased that...

Sir: Possibly a few words in support of, and in addition to, Julian Critchley's interesting piece (23 July) may be helpful. He is quite right to emphasise the strategy of...

Sir: Simon Raven must indeed have been a precocious child to have spent his mornings in wartime Cambridge engrossed in 'classical texts and arcane dissertation on series and...

Sir: Well, your Mr Waugh may be all manner of horrid things, but at any rate he isn't a punter; not at any rate currently obtaining in London, that is. 'British prostitutes . ....

Sir: I am at work on a biography of Julian Maclaren-Ross (1912-1964) and would appreciate hearing from any of your readers who have letters, memorabilia, or other information...

Sir: How sad that Peregrine Worsthorne (16 July) should feel a 'wasted sense of opportunity' when he sees a pheasant on the wing, and is without a gun to kill it. One can only...

Sir: Robert Skidelsky makes some valuable points in his article Language and politics (18 June). He indicates, for example, just why it is that a writer who is neither...

Sir: Some months ago, Mr David Levy played a game of chess against a computer programme. This was reported in the Scientific American. But Mr Levy is your chess correspondent,...

Sir: As far as Christians and Christianity are concerned, Christopher Booker (9 July) should know that it is a case of gum homilies tot sententiae. So it is a bit foolish of him...

Unbridgeable gulf William Deedes How Long Will South Africa Survive? R.W. Johnson (Macmillan £8.95 hard cover, £3.95 soft) Anyone who has flown into Salisbury during the years...

Robert Skidelsky E.M. Forster, A Life: The Growth of the Novelist 1879-1914, P.N. Furbank (Sacker and Warburg £6.50) Biography is the most frustrating of projects. The problem...

Simon Raven Trollope and Politics:A Study of the Pallisers and Others John Halperin (Macmillan £8.95) John Halperin, as he declares in his preface, has intended to sum and...

Anthony Burgess I have often wondered, reading multiple notices of new volumes of poetry, how the reviewer set about doing them. I have now a chance to find out. Let me say at...

Peter Ackroyd Midlife Feasts Rudolf Nassauer (Jonathan Cape £4.50) There was a time when the novel was a'kind of shared joke between writer and reader; it was 'unreal', but...

Art into landscape John McEwen Many people inside the world of the contemporary arts as well as out, worry that the visual arts have lost touch. And in these days when the...

Rough and raw Ted Whitehead That Good Between Us (Warehouse) There aren't many theatres in London that could take on a play with thirty-two roles, so one must welcome the...

Old bore Richard Ingranns Reginald Perrin, whose. Fall and Rise as chronicled by David Nobbi is being repe ated on BBC 1, is an admirable figure com pared to Reginald...

Outdoor types Jeffrey Bernard Last weekend was, for me, one of those that you don't get to savour unless you associate with the sort of people that your old headmaster would...