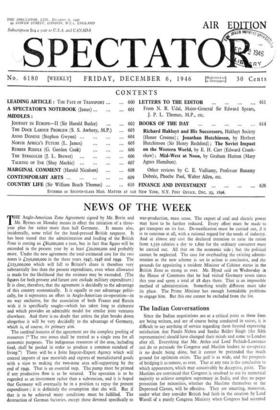 T HE Anglo-American Zone Agreement signed by Mr. Bevin and Mr. Byrnes on Monday means in effect the initiation of a three- year plan for rather more than half Germany. It means...

Since the Indian negotiations are at a critical point as these lines are being written, and are of course being conducted in secret, it is difficult to say anything of service...

The United Nations have, one way and another, wasted a lot of time over Spain. As long ago as June a Security Council sub- committee discussed that country at length and reached...

It would be foolish not to welcome the recent concessions made by Mr. Molotov at the meetings of the United Nations and the Council of Foreign Ministers in New York. These...

Although the British occupation of Indonesia ended officially last week and Britain has now left the Netherlands and Indonesia to reach their own agreement on the new State to...

When practical knowledge and concrete purpose can be detected in the Government's policy for industry, they are usually associated with the work of Sir Stafford Cripps. In...

The annoucement that Argentina is willing to receive 4,00o,00o Europeans at a rate of 30,000 a month is the most resounding President Peron has yet made. Coming on top of the...

F OREIGNERS traditionally find us odd. They certainly must have thought us odd at Westminster on Tuesday. There we were, weighted down with all the burdens attendant on national...

The question raised by the failure of the attempt of the Willesden Borough Council to compel all its employees, including nurses and midwives, to join a trade union is not...

In a speech at Leeds last Saturday, Mr. Herbert Morrison said that the shortage of manpower might get worse, but that bottlenecks in general were no cause for gloom since they...

THE FATE OF TRANSPORT

ALK about nationalisation in general is becoming wearisome, whether it be favourable or unfavourable. What is wanted now is a demonstration of how the thing works. Yet as one...

Instructive light on politics as practised in the happy days

when politics were politics is cast by a letter which the diligence of the Librarian of the House has extracted from the files of the Lincoln Rutland and Stamford Mercury,...

Dame Priscilla Jean Fortescue Grant for the Burgh of Aberdeen (South Division)." What Mr. David Kirkwood said, as the new Member took the oath and signed the roll was, "A nice...

A SPECTATOR 'S NOTEBOOK I SHOULD doubt whether the Chancellor's Committee

on the Law of Defamation, which is now preparing its report, would find much food for reflection in the Laski libel action, for the issue turned more than is common in such...

A ceremony of universal interest will, I understand, take place

next June, when a plaque will be placed in Westminster Hall to commemorate one more of the many events of supreme national importance which took place in that historic building....

The Tories displayed unlooked-for emotion over the Nelson pen- sion

debate. It was known that a handful of them intended as indi- viduals to oppose the Bill ending the annuity of £5,000 to the descendants of Lord Nelson's brother, but in the end...

The action of the Lord Chamberlain in banning a song

on con- temporary politics and politicians in a forthcoming revue called "Between Ourselves" no doubt in theory raises questions of prin- ciple, but no one but the most...

By SIR HAROLD BUTLER T HE notion of setting out once more for Germany conjured up a procession of ghostly memories. Back came the old days of the Kaiser when it was overflowing...

By S. S. AWBERY, M.P. I N February this year the Royal Assent was given to the Dock Workers' (Regulation of Employment) Bill, and it became an Act of Parliament. It was the...

By STEPHEN GWYNN B ERNARD SHAW'S ninetieth birthday was very properly treated as a notable piece of news ; but it gave some people furieusement a penser. One can't say "many of...

By L. JAMES T HE five major political units along the 2,000 miles of the North African coast from Morocco to Egypt are on the threshold of either a greater measure of...

By SHAY MACKIE S OME people came in after dinner last night, and a man took out of his pocket-case a sheet of paper covered with writing so faint that one would have supposed...

By G. GORDON GOOK T ODAY the importation of synthetic rubber from America has ceased. British tyre-manufacturers are using up their stocks and preparing to switch over to the...

By J. L. BREWER P TE. WINDSOR, F. R., will not quit India. I thought about him the other day, when I was turning out my steel trunk and came across some letters and my diary...

By HAROLD NICOLSON N writing the other day about the unfortunate Claude-Nicolas I Ledoux, I expressed my sympathy with architects who are so scIdom permitted to create what...

MUSIC THREE modern concertos within the last week have caused a ripple in the generally peaceful flow of classical and romantic masterpieces which represents the enormously...

"Day of 1Vrath." At the Academy. THERE are some films in the history of Cinema which have set ne:ther fashions nor techniques, but which have nevertheless had a profound...

In My Garden The subject of hedge plants seems to

be engaging very general atten- tion, and opinions differ. That famous gardener W. Robinson disliked yew, which is generally regarded as ideal, and yet more viciously the...

Some years ago the search for a cider apple that was thought to have vanished was brought to success by three readers of The Spectator. The variety bore the euphonious name of...

THE worse the weather the more native plants and some native wild creatures seem to flourish. November was a month of gale and rain ; but seldom have flowers so prospered beyond...

The wonders of migration of the duck tribe have been brought further into the open by the experiences of the ringing station at Orielton Decoy. Even peasants in remote countries...

The careful Tennyson, writing of seed-distribution in In Mentoritmt, said, "Of fifty brings but one to bear." He was criticised for his gross under-statement by a scientific...

THE DANISH CHURCHES AND SOUTH SLESVIG SIR,—Will you allow me

to add to the recent correspondence on the problem of South Slesvig in reference only to the position of the Church? I received a few days ago from a friend in Denmark a...

Sin,—Your review of Mr. Kenney's book—The Northern Tangle— implies that Sweden, despite her acceptance of membership of the United Nations, has got to make up her mind about the...

THE BRITISH IN AUSTRIA St,—One of the most important recommendations made by the Select Committee on Estimates examining British expenditure in Austria has been "that a new...

THE CONSCIENCE OF MR. GANDAR DOWER Sta,—The reference made by

Janus in your issue of November 22nd to Mr. Gandar Dower's failure to honour his election pledge and resign his seat in Parliament upon the defeat of Japan is just and timely....

THE SPECTATOR" AND THE DOCTORS

SIE,—As a regular reader of your paper, I was surprised to see the com- mentary on the doctors' plebiscite in your issue of November 22nd. It appears to me as a good example of...

THE MAHDI AND THE SUDAN

SIR,—I have read with much interest Sir Nigel Davidson's letter in your issue of November 29th, The Mahdi died in 1885—a few months after the death of Gordon—so he cannot be...

Sta,—If your correspondent, Mr. Ross, will refer to my letter in your issue of November 22nd he will see that I am concerned only with conditions obtaining at present. He may,...

Sra,—As a medical reader of The Spectator, I feel I

must enter a protest at the advice to the doctors to co-operate with and not resist the Minister of Health. The doctors feel that the Minister has given them a raw deal from the...

THE FRENCH IN THE SYRIAN CAMPAIGN

SIR,—Returning from the Middle East, I observe that Brigadier Fergusson, writing from "Combined Operations" H.Q., has found it possible to spare time from the consideration of...

recently appealed in a provincial paper to all who wished to help in the fight against famine in Europe, telling them where they might send their contributions. An anonymous...

SIR,—Two aspects of cardiml importance need to be considered: s. Can the problem satisfactorily be resolved by an enquiry into individual cases, in which local interests...

Sta,—At the end of July, 1942, there appeared in Sotheby's book catalogue a letter from Anthony Trollone for sale, dated March 24th, 1861, and written to a Miss Dorothea Sankey...

SIR,—It was my privilege to attend a meeting at Washington in September, 1936, when Mr. Roosevelt gave a stirring address before pressing a button to open formally the sluices...

To assist the Postal Authorities, subscribers are requested to forward any change in their address to THE SPECTATOR, 99 Gower Street, London, W.C. r, by the following dates :-...

Divers Voyages MOST appropriately, the Hakluyt Society celebrates its centenary year with a volume devoted to the work of its spiritual forbears, notably the great Richard...

Jonathan Hutchinson. By Herbert Hutchinson. (Heinemann. 12s. 6d.) TEC.HNICALLY, although it has obviously been a labour of love, this is almost everything that a biography...

What Price the Individual ?

The Soviet Impact on the Western World. By E. H. Carr. (Macmillan. 5s.) ON the face of it, this small volume is straightforward enough. It contains six lectures, slightly...

THE intellect of man, a late result of evolution and as yet extremely fallible, has never been unduly inconvenient and assertive. It is only by a generous extension of meaning...

Mid-West at Noon. By Graham Hutton. (Harrap. 18s.) BOOKS have a certain temperature. This is a warm book, impregnated with kindness ; the book of a person who looks back on a...

Woodstock. A Moral History. Edited by A. P. Rossiter. (Chatto and Windus. I5s.) IT is time that we had a good popular edition of this Elizabethan play, variously known as I...

Velvet Studies. C. V. Wedgwood. (Cape. 7s. 6d.) THOMAS FULLER'S remark which gives this book its title, "There is no danger in meddling with history which is a velvet study and...

THE new number of Selected Writing is easy reading and

is made up of some fourteen short stories and sketches which are of varied merit. Some of the shorter sketches are slick and competent, but not much more, but contributions by...

EVERY writer must be allowed his off-days, his book which is below the standard that his previous work has set for him ; the misfortune is the reviewer's when all the review...

Round Trip. By Alfred Pertes. (Dennis Dobson. 7s. 6d.) ALFRED PERLES is a Czech refugee, who writes both in French and English. This book is in English, but has a preface of...

IT is good to see the classics gradually reappearing in the bookshops. The demand is just as great as ever, but many publishers have schemes in hand to better the supply. Many...

SOLUTION TO CROSSWORD No. 402

By CUSTOS WHATEVER one may think of the ethics of cheap money policy as practised by the present Chancellor of the Exchequer, one cannot but be impressed by the success...