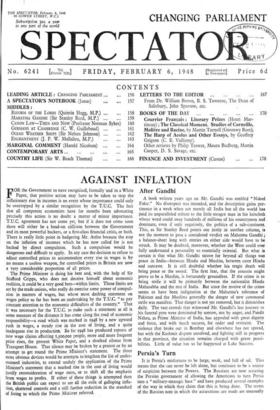 A book written years ago on Mr. Gandhi was entitled "Naked Fakir." No disrespect was intended, and the description gains per- tinence in a week when not merely all India but all...

It is Persia's misfortune to be large, weak, and full of oil. This means that she can never be left alone, but continues to be a source of suspicion between the Powers. The...

F OR the Government to nave recognised, formally and in a White Paper, that positive action may have to be taken to stop the inflationary rise in incomes is an event whose...

Theory and Practice in Germany

The basic reality in Western Germany is that on Tuesday two and a half million people were on strike in protest against inadequate rations. This action did no good either to the...

Nationalisation and - the Nation

The difference that arose in the House of Commons on Monday between the Minister of Transport and a number of private members regarding questions on the working of nationalised...

The Battle of Italy •

The tacit struggle between East and West for the friendship of Italy has now reached a stage at which it is necessary to check the score. The Americans have scored with the...

The difference that has arisen at Lake Suocess between The United Nations Palestine Commission and the British Government is not surprising. When the British finally move out of...

Horse Sense from the T.U.C.

A suspicion of Communist infiltration was traditionally supposed to have the same effect on British trade union leaders as a whiff of gunpowder on a cavalry charger. But the...

If the speeches and resolutions at medical gatherings all over the country are a reliable index—as there is every reason to suppose they are—the plebiscite of the medical...

T HE pre-war tradition that Friday was a parliamentary " off day " still lingers in these years of " streamlined " legislative activity. An adroit parliamentary manager may well...

I N the light of the statement made by Viscount Addison in the House of Lords on Wednesday it is at least possible that by the time the next Parliament assembles not one but...

When the New Yorker pronounces something to be good I

conclude that it is good. That goes (as the New Yorker would say) for MPF. The initials stand for Multi-Purpose Food, a compound based on soya bean but containing a good deal...

Is the battle for National Parks won after all? It

Lord Baldwin's famous unsigned letter to The Times in 1917,

stating that he was handing a fifth of his fortune to the Chancellor of the Exchequer has been much quoted since his death. In an article on Lord Baldwin in the Cambridge Review...

I approached this paragraph in a spirit of deep concern.

Someone had told me that my valued and respected colleague Harold Nicolson had used the term " blue print " wrong. That, fortunately, is only half true. What Mr. Nicolson did...

" The Sutton's Hospital in Charterhouse Bill was read a

second time" said the daily papers on Tuesday, if indeed they said as much. You could hardly expect them to say more. Yet, as sometimes happens in measures of this kind, the...

T HE restoration of harmony in the House of Lords on Wednesday was a brief, dignified and cordial proceeding. There was the usual excess of corporations over accommodation, and...

REFORM OF THE LORDS

By QUINTIN HOGG, M.P. IA ORD MELBOURNE is said always to have staved off the enthusiasm of Cabinet colleagues with an inopportune zeal for reform by the devastating question, "...

By SIR STANLEY REED, M.P. W ITH the tragic death of ,Mahatma Gandhi there passes the most arresting personality that has swept over the - vast mosaic of India for generations....

By PROFESSOR NORMAN SYKES* T HE beginning of the difficult task of revising its canon law by the Church of England through its convocations has excited as little interest as...

By C. W. GUILLEBAUD• A NY Englishman or woman who is not devoid of either imagin- ation or human feeling must experience a sensation of inward discomfort at the sight of German...

By SIR NELSON JOHNSON• T HE public first heard of the ocean weather ships last summer when the Secretary of State for Air performed the ceremony of naming the ' Weather...

By SATEYNDRA NATH DUTTA (translated by Annapurna Multherji) Oh you whimsical man, you are burning candles in broad day- light—and writing rubbish. In the streets crowds are...

By HAROLD NICOLSON L AST week, when discussing Mr. Bevin's parliamentary manner, I referred to the different habits of thinking which various in- dividuals adopt. I have been...

THE THEATRE THE news that an inspector from St. Petersburg is on his way— travelling, it is thought, incognito—to a small town in South Russia gravely perturbs the Mayor and...

THE New Era Concert Society, a non-profit-making society founded in order to bring music of the highest order within the reach of everyone, gave its first concert on January...

ARE our open and close seasons wisely and humanely designed? The Iluestion, which often occurs, is, of course, unanswerable, for the seasons vary by large margins. Last year...

Tins week I have seen exhibitions by a Sinhalese monk, a Parisian, eighteenth- and nineteenth-century water-colourists and a group of unknown youngsters. In such circumstances...

Scout Fires A most attractively illustrated card has been designed

for Boy Scouts on the perennial subject of firewoods, and fires are given three divisions: kindling, quick and slow. The slow or continuous fire is the one which chiefly...

The Worst Weeds If a vote were taken for the

most offensive of weeds, that perennial " kex " (called by some ground elder, by some " the alder-weed," by some gout-weed, by some bishop's-weed and by learned botanists...

With me snowdrops were out about mid-January, coinciding with the blossoms of the Algerian iris, and almost at the same date the hazel male catkins began to distribute pollen...

SIR,—In arguments for and against the projected National Health Service there seems still to be an inadequate appreciation by the general public of the unique nature of the...

is somewhat unhappy in the choice of quotation, viz.: " Whate'er is best administered is best." It implies a coldness, a sense of fatalism ; conjures up the dangers of...

SLOW PROGRESS IN THE CARIBBEAN Sut,—There is a most excellent

middle in your issue of January 30th, by W. J. Brown, M.P., entitled Jamaica Boss but also dealing generally with West Indian and Caribbean affairs. The acute and incisive...

SIR,—Over the past eighteen months The Spectator has published comments

on the National Health Act. Always The Spectator has spoken in a lordly manner to the doctors. The doctors are to be good boys and are to sign on the dotted line, drawn up by...

Snt,—With reference to the letter in The Spectator of January 30th purporting to be signed by a Mr. A. Lattie, it will perhaps suffice to place this in its correct perspective...

PUBLICITY FOR THE CHURCH

Sta,—As a member of the Church Assembly Publicity Commission, I was glad to read the comment on our report made by Janus and fully agree with his view that so-called religious...

SIR,—Since, thanks to the courtesy of one of my English friends; I am now a regular subscriber to The Spectator, I should like to offer a word of congratulation to you on the...

Stit,—I see that Mr. Harold Nicolson's too kind Marginal Comment on my book has been followed by two letters written to The Spectator. I have read the latter (Lord Antrim's),...

Sta,—Of course we all wish the new headmaster of Rugby

every Success. But is there not a danger for all headmasters in the modern educational situation, with its multiplicity of forms and accessories, that they become so obsessed...

Stm,—Mr. Mallalieu's amusing reminiscences of Cup-tie football in your issue of January 30th contain an inaccuracy which I should like to correct. Describing the Cup Final of...

A QUESTION OF EXPRESSION

Snt,—Mr. Nicolson is, as all will agree, admirable as a rule in felicity of phrase. This week, however, he writes: " Lord Castlereagh, who with all his great lucidity of mind...

Sm,—Let us be fair! Not all of the 2,909 Orders issued last year introduced new legislation. Many were made to correct errors or to add points overlooked in making the original...

SIR,—You say the Conservatives' case for the reform of the Lords is weakened by the fact that they took no steps to do so while in power. Several attempts were made in 1932/33...

Sta,—As a constant reader of your paper I should highly appreciate your courtesy in publishing the following commentary on The Revolutions of 1848, giving some aspects of the...

Sta,—I have just read Honor Croome's Planners and Wages in your issue of January 16th. She argues that since miners and farm workers must be given, and are being given, a higher...

StR,—I wonder if you would kindly consider making the fact known to your readers that any educational books they may have to spare would be extremely welcome to the Displaced...

Courrier Francais Literary Prizes (In the fifth of his surveys of current French literature M. Henri Martineau discusses the books which have won the winter's literary awards...

MR. TURNELL has already established himself as an acute and stimu- lating literary critic, and this book can only add to his reputation. He possesses in a rare degree the...

The Harp of Aeolus and Other Essays. By Geoffrey Grigson. (Routledge. 15s.) OBSESSION with its historical or categorical meaning frequently mis- leads us, I think, with regard...

THERE is nothing like giving away a secret if you have a bigger one to hide. Messrs. Pearson and Kingsmill start right away with a chapter on how their book was written. Mr....

A Czarina's Story : A Memoir by the Wife of the Emperor Nicholas I of Russia. Edited with an introduction and epilogue by Una Pope-Hennessy. (Nicholson and Watson. 8s. 6d.) THE...

The Music of Sibelius

THIS is the third in the series of composite studies of individual composers edited by Professor Abraham. Tchaikovsky and Schubert (numbers i and 2) lent themselves more easily...

Shorter Notices CONSIDERING the richness and interest of the material

there have been remarkably few books on Assyriology. The science is little more than a hundred years old ; we have had the notes and books of Rich and Layard, Gertrude Bell, T....

The Port of London. By John Herbert. (Collins. 5s.)

THIS, the latest addition to " Britain in Pictures," is not among the most successful contributions to the series. Vital as the Thames is to the port the two are not the same...

SOLUTION TO CROSSWORD No. 461

[A Book Token for one guinea will be awarded to the sender of the first correct solution of this week's crossword to be opened after noon on Tuesday week February 17th....

By CUSTOS THE' City's first reactions to the Government's White Paper on incomes, costs and prices were clearly shown in the behaviour of the Stock Exchange on Wednesday....