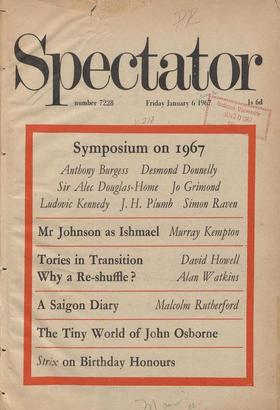 'I think there are more worthwhile causes to give money to than old buildings!—Mr Geon Stevens in reply to a request to give some money to Winchester Cathedral, about which he...

POLITICAL COMMENTARY By ALAN WATKINS It is difficult to see how Mr Harold Wilson can be very much more ruthless on this occasion. True, a few of the middle- and lower-order...

AMERICA From MURRAY KEMPTON NEW YORK W E are at one of those moments in the affairs of advanced civilisations when every hand that holds a dagger plunges it into just one...

Seven 'Spectator' contributors venture their hopes for the new year Anthony Burgess A change in the Tory leadership, alas. A ruthless aggressiveness is needed in the Oppo-...

VIETNAM From MALCOLM RUTHERFORD SAIGON with the sound and quantity of the planes the newly arrived observer, the war begins and the variety of uniforms at Bangkok airport....

The Change at the Grass Roots

TORIES IN TRANSITION — 1 By DAVID HOWELL, MP rr HE structure of the Conservative party is well I suited to government. Is it as well suited to opposition? Basically, the...

I WAS pleased to see that the Prime Minister, in his speech on the press on Tuesday, echoed my colleague Donald McLachlan's repeated chal- lenge to the newspaper proprietors to...

CONSUMER'S GUIDE TO THE PROFESSIONS — 3 By JOHN ROWAN WILSON TN ordinary circumstances a patient doesn't 'choose a consultant—his general practitioner chooses for him. If he...

THE PRESS By DONALD McLACHLAN N EWSPAPERMEN, especially those concerned with editing, commenting and reporting on public affairs, should not accept honours from governments....

January 5, 1867 The north transept of the Crystal Palace has been burnt down. The fire broke out about two o'clock on Sunday, apparently from an explosion of gas, there was no...

TELEVISION By STUART HOOD P runners are already beginning to line up for the Yorkshire Television Stakes—prize money, £8 million gross advertising revenue. The trouble about...

SIR,—Evelyn Waugh once told me that the presence of his

SIR,—It is not hard to see, after reading Mr Auberon

Waugh's 'Christmas Sermon,' what it was Fr Charles Davis found so unbearable about the Church of Rome in this country. Mr Waugh may be a good deal more literate and literary...

SIR,—Stuart Hood (December 30) says that the ob- jectors to Miller's Alice are 'aghast at the idea of artistic intelligence being allowed to examine afresh a cult object.' He's...

SIR,—Writing of Alice, Stuart Hood complains of 'a monstrous display

of prejudice ... by persons who had not seen the programme.' I was one of those persons. But why was it monstrous? We were told that a children's book had been turned into a...

Sm.—Because it has been a painful experience for me as

a Catholic that Charles Davis should leave the Church, and because salt has been rubbed into the wound by the publicity and terrible thorough- ness ,with which he has done this,...

Stn,—On the whole I enjoy the contributions of Randolph Churchill; he is readable and provocative. It is a pity, however, that he shows such pettiness to Lord Butler whenever...

The Path from Rome

SIR,—What a relief to read 'The Path from Rome' (December 30) as an antidote to the adolescent petulance of Mr Auberon Waugh_ It would be an impertinence for anyone not...

SIR,—As a newspaper worker, I have been most in- terested to read the recent articles on the press by Donald McLachlan, especially as he writes with a long experience in...

SIR,—In your issue for December 23, John Rowan Wilson, in his article on general practitioners, warns against 'the so-called "clever" doctor,' who, according to Mr Wilson, 'is...

23) states that Christopher Britton, who won his appeaT on December 19, is 'the first person sentenced under the 1965 Race Relations Act.' He is not. He was convicted on October...

A Question of Gender

SIR,—The services of a family doctor tend to be more

intimate, important and long-lasting than those of any other professional man, yet how hard it is to choose personally and well. Dr Rowan Wilson (December 23) listed the quali-...

ancestor so intrigued me that I hied to the Clergy List for 1856 (in my possession) and found that Master Thomas Sockett (two t's) had indeed done pretty well for himself (or...

BALLET more adventurous policy than other companies. In sum, ballet spent most of last year looking back over its shoulder: and it is surely not neces- sary to remind the...

The Tiny World of John Osborne

DRAMA By HENRY TUBE L max wonder that John Osborne lost his temper with the critics last summer; he was, as it were, only honouring his bond to play the role of Devil's...

OPERA N old dream is on its legs again: a shiny new opera house in the heart of Man- chester, with the latest in the way of knobs, dials, stage lifts, bridges, turntables and...

ART W ins the next couple of weeks bringing us nothing but Millais and Gillray to leaven our aesthetic lot and breathing a quiet, inward moan that none of the stupendous shows...

MOM By ANTHONY BURGESS I N Singapore, a few years ago, there was a slogan competition, run by the 'Tiger' beer company. One of the winning entries was : If all Malaya's rivers...

THIS is the sixth instalment of Ilya Ehrenburg's monumental autobiography, the whole series being longer than War and Peace and contain- ing rather more characters. Looking...

'IT is a frightening thought, yet I believe true,' writes Professor Gombrich, 'that anything we say or write about a painting may change it in some subtle way. It reorganises...

The McMahon Line: A Study in the Relations Alastair Lamb.

Two volumes. (Routledge Along the Imperial Frontiers Tun main range of the Himalayas, which divides the Indian subcontinent from the Central Asian plateau, forms one of the...

Reflections at the Forge

He bought stones first in the corners of fields And thorn bushes for birds He bought time like a lotion To smear over the island in an amber light He bought a master plan for...

THE fervour with which the public took the Rev Keble Martin's British Flora to its heart is a token of how we are beginning to feel as the concrete spreads more widely and the...

VHE BDDHOH a nil 0071" By NICHOLAS DAVENPORT I T is always useful for businessmen—not to mention journalists—to have an economic blueprint for the year issued in January by...

CONSUMING INTEREST By LESLIE ADRIAN Now, while the sales are supposed to drain away our remaining liquid re- sources, we shall be called to account for Christmas. The big...

By CUSTOS MBE markets opened the New Year a little I more cheerfully, especially as various scribes have been producing their tips for the new year's winners. The easiest...

By JOHN BULL H OLDING shares in 1967 is unlikely to be such Elan exasperating experience as it was last year. That is not to say that the market will move decisively upwards,...

By STRIX IRsEN: Charles II: William Penn : the Duke of Nor- folk : and Strix. Which is the odd man out? To say that I was gratified when my attention was drawn to the entry...