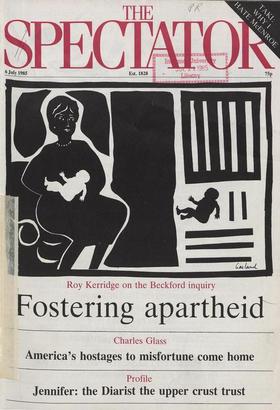 T he 39 American hostages still held in Beirut after the seizure of a TWA airliner were at last freed, after negotiations be- tween Syria and the USA. Their departure from...

SAD news reaches us from Slough, the town already famous for not having grass to graze a cow. The Labour members of the borough council had been considering a motion, put to...

'IL N'A pas ete eduque a Eton, il n'a pas raine pour Cambridge . . . .' Who is this unfortunate of whom M. Francis Cornu writes in Le Monde? We have already learnt that he is...

How the Tories can question Labour's new decency CHARLES MOORE His stealthy achievements are real, though one cannot yet say whether they are lasting. There is no one in the...

P resident Reagan has partly, but only partly, adopted the suggestion I made two weeks ago that all Middle Eastern airports Should be put in quarantine. I was fortified by the...

How Brecon and Radnor might have been won AUBERON WAUGH H aving covered, I suppose, about a dozen by-elections in the course of my journalistic career, I decided not to go up...

Roy Kerridge questions the idea that foster children and parents must be racially matched, and attends the Jasmine Beckford inquiry as a witness MRS BOATENG, wife of Paul,...

Charles Glass on who manipulated whom during the Beirut hijacking Frankfurt IN HIS book Oriental Encounters (Heine- mann, 1918), Marmaduke Pickthall recal- led that during his...

Roy Kerridge will continue his discussion of the inquiry next

Sam White on the French Socialists, bitterly divided over an election they will in any case lose Paris IT WAS only a week or two ago that the French Left was smiling with...

Dhiren Bhagat on the SS's ominous plan to change Bombay's name SOME years ago, looking through the library at Dove Cottage, I came across a book called Voyage from Bushear to...

Survivors: tireless society diarist I FIRST saw Betty Kenward in 1959 at a dance in Hyde Park Gate. I was a far from reluctant debutante at the time and con- scious that Mrs...

FESTIVAL OF THE ID

Ferdinand Mount on the way the press like tennis stars to remain adolescent Wimbledon AFTER the match, we scuttle away from the crowds through a little iron gate, down a...

AMONG the little-noticed but most important facts in the history of the world is the enormous recent increase in the number of white men in it. . . . Nor is there much reason to...

Broadcasting: Paul Johnson on the help television lends to terror MORE important to him than the gun or the bomb, the terrorist's most potent weapon is the television camera...

Robert Maxwell has written to me about my reference to

him last week, and has asked me to state that he does not trade with Eastern Europe and never has done.

Under the volcano Mrs Thatcher erupts at the EEC summit JOCK BRUCE-GARDYNE K rakatoa has nothing on it'. Thus the Times creatively misreported Mr Ber- nard Ingham on the Prime...

BREAKFAST at the Savoy with Ian Mills. 'Is it true,' I ask him, 'that you are the largest employer of labour in Europe?' 'No,' he says: 'that's the Red Army. We're second.' This...

Go ahead and shoot the chairman: that's what he's for CHRISTOPHER FILDES P oor Peter Laister. It is bad enough to be shot on your own quarterdeck at Thorn EMI, but to find...

WHERE there's a tip there's a tap, so what do you get where there are 21 tips? You get an endowment. The point was not wasted on the City audience which filled Haber- dashers'...

MOZART at the Mansion House, Bob Kerr's Whoopee Band in Paternoster Square — the City of London will resound, this next fortnight, with the music of its own Festival. Great...

Sir: I number no political correspondents or diarists amongst my friends. Indeed, if Alan Watkins is in any way typical of such people I shall keep them at a barge-pole's...

Sir: Donat Gallaher (Letters, 1 June) might have checked his own favourable Opinio n of Waugh in Abyssinia less with contemporary reviews or with the author himself (unlikely...

Arrogance Sir: Mr Christiansen, whoever he is, does not know the correct use of the term 'arrogance' (Books, 22 June). Most people don't. The dictionary will tell them that it...

SUBSCRIBE TODAY! I would like to take out a subscription to The Spectator. I enclose my cheque for I (Equivalent$ US& Eurocheques accepted) RATES: 12 Months 6 Months...

W riters divulge to the world the tricks of the trade at their peril. Anthony Trol- lope's posthumous Autobiography dam- aged his reputation for half a century, and since then...

The loneliness of John and Ladye

Brian Martin OUR THREE SELVES: A LIFE OF RADCLYFFE, HALL by Michael Baker Hamish Hamilton, £13.95 M arguerite Radclyffe Hall was an extraordinary woman; and, let it be said...

A warning against Caesarism

Christopher Hitchens GEORGE WASHINGTON AND THE ENLIGHTENMENT by Garry Wills Robert Hale, £16.95 T he two most celebrated battle cries of the American revolution were Nathan...

A little touch of Larry on the night?

Mark Amory YEAR OF THE KING by Antony Sher ChattolHogarth, £10.95 T he publishers have been lucky. Antony Sher had been approached to write and illustrate a book about his...

writing in ice-cream Peter Levi RILKE: A LIFE by Wolfgang Leppmann Lutterworth Press, £17.50 A critic is expected to have hard edges. The most ferocious young critics of...

Sarah Bradford UNHOLY PLEASURE OR THE IDEA OF SOCIAL CLASS by P. N. Furbank Oxford University Press, £9.50 A s the title of his book indicates, P.N. Furbank thinks that the...

Irish the most charming sinners

Harold Acton THE SEVEN DEADLY SINS: A COLLECTION OF NEW FICTION Edited by Delia Cooke Severn House Publishers, £7.95 T he publisher's blurb alleges that sin has always had a...

I read your letter: then I took a knife and went into the garden. There was much that needed doing: everything in leaf and flower, grossly intertwined; each branch a mess of...

Andrew Robinson BEYOND BOKHARA: THE LIFE OF WILLIAM MOORCROFT by Garry Alder Century, £16.95 D espite his obscurity relative to other 19th-century travellers, William...

Lots of bang and no whimper

O p er a La donna del lago (Covent Garden) Getting through it Rodney Mimes S everal young persons of my acquaint- ance told me that the only way to get through Akhnaten was...

Around 1610: The Onset of the Baroque (Matthiesen Fine Art 61116 August) Decorative and macabre , D avid Wakefield T he latest in a series of remarkable exhibitions held in...

Artistic licence Taki J ohn Stewart Collis once wrote that he was surprised that so distinguished a tennis player as Taki should disparage so great an artist as McEnroe; 'for...

Too much blandness Peter Levi I t is an alarming thought that 24 per cent of our householders and a third of all adults live alone. They must watch a lot of television. At...

Home and away Jeffrey Bernard S he's really getting to be too much. She doesn't want to drown in my eyes any more, she wants to melt in my arms now. She also has an awful...

Meddling with the Mass Alice Thomas Ellis I have decided that, like it or not, I must go to Mass again every Sunday. I gave it up when one day some years ago I walked...

Saving the Stones P. J. Kavanagh I f I were to write about what has really nagged at me this week this column would consist largely of questions to which I do not know, and am...

No. 1379: Word of the week Set by Jaspistos: Recently I saw in a dream a word which doesn't exist in English: `macelod'. You are invited to provide, in the manner of a panel...

Juspistos reports: Competitors were asked for a piece of prose, as prosaic as possible in content, which, otherwise printed, is seen to be rhymed verse. _I once artfully read...

Solution to Crossword 712: Up to no good arkliMla E . UtORNY

AS IT is the Fourth of July week I think we should have a few American receipts to remind us how independent they are. We are so inundated with all those Hamburger places and...