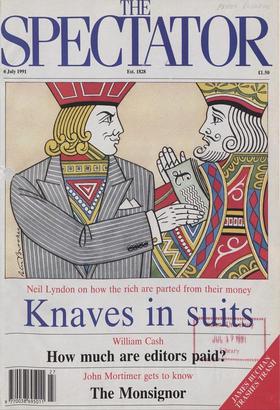 `Are you sure you can see the end of it?' M argaret Thatcher, MP for Finchley, announced that she would not stand again for the House of Commons, so that she could be free to...

No holds barred in the twilight of the goddess SIMON HEFFER Y u would have to be abnormally defi- cient in mischief not to wonder what the new grandees of the Conservative...

DOMINIC LAWSON I very much regretted that my interview with Mr Nicholas Ridley a year ago angered the communitaire Government Whips Office so much that they engineered Mr...

These punishment freaks will lose us the next general election AUBERON WAUGH hen we have all finished laughing over the Old Bailey acquittal of Patrick Pottle and Michael...

During the prosperous Eighties it was plausible to imagine that there was easy money to be made. Neil Lyndon tells the story of some who had their fingers burnt ACCOUNTANTS...

THE Irish Bishops have made and pub- lished a joint declaration, signed by all of them except the Bishop of Limerick, that, in their judgment, "as pastors of the Irish people,...

THE WAR OF LIES

Noel Malcolm reports on the violent break-up of Yugoslavia Ljubljana — Zagreb I WAS sitting in an office at the back of the Slovenian parliament, interviewing one of the...

BACK IN THE OLD ROUTINE

John Simpson on Britain's habit of fastening upon irrelevant details in the EEC IT WAS like trying on an old suit, hanging forgotten at the back of the wardrobe: intimate yet...

William Keeling describes how he was deported by the Nigerian government 'A NICE piece of prose, very tightly written', the state-security officer told me after reading...

THE MONSIGNOR AT NINETY

John Mortimer talks about good and evil with Monsignor Alfred Gilbey `I WAS born the day after the anniversary of the Battle of the Boyne and the day before that of the fall...

A reader received the following letter: Would you like your mortgage paid off if you suffered a serious hilliness? Allied Dunbar has recently carried out extensive research...

editors who have denounced high pay rises how much they are paid "THERE are few ways in which a man can be more innocently employed than in get- ting money,' said Johnson in...

persist.. . I READ of the appointment of Terence Eagleton, a Marxist, to a chair of English at Oxford with half-pleasurable indigna- tion. Apparently, his ambition is to be to...

Paul Johnson will resume his column next week.

THE Blue Arrow trial is heading for its ninetieth day and looks more and more like the City equivalent of the latest naval court-martial. She was found in his cabin, wearing no...

THE European Court dispenses palm-tree justice. It sits like a pasha under a palm tree, unconcerned with precedent, indiffe- rent to practice, and happy to make up the law as it...

Tell the creep in the back office to get off the cheques CHRISTOPHER FILDES L ooking wretchedly conscious of their position, the chairmen of some of our largest companies...

PARKINSON the Lawgiver taught us that the number of admirals would rise under its own momentum by 5 per cent a year, irrespective of the number of ships in the Navy, or whether...

Sir: Congratulations are due to Sally Richardson for her exposé of the activities of RSPB investigators (`Strictly for the birds', 25 May). I too have heard of many similar...

Sir: How heartening it was to discover that Mrs Thatcher takes no notice of Paul Johnson's advice, (`Open letter to an Iron Lady', 29 June) to remain in the House of Commons. I...

Sir: Mr Peter Carter-Ruck's letter (29 June) is disingenuous, not to say tenden- tious, on several points. For a start, he compares the Observer's circulation figure in 1980,...

Heavy lightweight reading James Buchan A quarter of the way into Jeffrey Archer's novel, As the Crow Flies, a child is born. Charlie Trumper, who later marries the child's...

Stones in a coffin-size box (and it could take a body if stones were scarce), huge chassis, gear-wheel, chain, rollers: , some dungeon-daughter of the likes of Skevington or...

Richard Lamb SUEZ by Keith Kyle Weidenfeld, £25, pp.656 T he inside story of the abortive Anglo- French assault on Egypt in 1956 stayed a secret for 30 years. At the time...

Close encounters of the third party

Love, when we left the house, still arguing, And you, preceding me down the steps, turned half Around so you could fling Abuse at my nasty laugh, And, by so doing, just managed...

Brian Masters D erek Bentley, an illiterate half-wit prone to epilepsy, was hanged for murder in 1953 after a trial attended by much sen- sational publicity, firstly because he...

Elizabeth Jenkins ELIZABETH I h is is a work of massive research, for which readers interested in the period will be grateful. It does not differ, essentially, from the...

Unchecked coarse grass and dock and clover sprout between flags of the swimming-pool steps, well on the way to greening them over; there's a bench, upturned, by the pool inside,...

Music Down with dodecaphony Herbert Lomas urges us to trust our ears and get rid of Schoenberg Only you must not tell people that that they will like my pictures. You must...

Set in alabaster Rupert Christiansen T he star of Glyndebourne's first ever production of Mozart's last opera La clemenza di Tito is the designer David Fielding, who has found...

No jam today Martin Gayford he other day there thudded through my letter-box a glossy brochure itemising the jazz festivals of the summer season. Half the towns in Europe now...

Ego trip Deirdre McMahon I n the week of Mrs Thatcher's resigna- tion, the presence of Michael Heseltine at the opening night of ENB's The Taming of the Shrew provided a note...

Let or hindrance Taki W a New York tching Wimbledon on American TV is a bit like seeing ballet performed in a saloon. Yankee commentators talk too much and too loud, distract...

Howard's way Martyn Harris W hen Howard Jacobson was TV critic on the late lamented Sunday Correspondent he watched enough travelogues to know the sort he didn't want to do...

The cinema column will resume next week.

Thin gravy Jeffrey Bernard I am so weak now that I could barely get out of the bath this morning. I ended up flapping on the floor like a fish out of water. The only thing for...

Upping the aunty Zenga Longmore M any's the time I have thought that an aunt is put on this earth to suffer. How- ever, it was not until last Wednesday that my most primitive...

IT WAS Monday. It was raining. I had too much work to do. And the only thing, I decided at about half past twelve, that might just possibly cheer me up — if not exactly help me...

You are invited to write a poem in celebra- tion of a famous pair — such as Flanagan and Allen, Hewitt and Macmillan, De- benham and Freebody, Rosencrantz and Guildenstern....

New dog, old tricks Raymond Keene A s Nigel Short cleverly demonstrated in his recent match against Jon Speelman, there is still some venom concealed in the apparently...

Quiz Jaspistos I n Competition No. 1683 I set you four posers. My awareness of these is due to the late Professor Ivan Morris, who challenged me with the first three, and to...