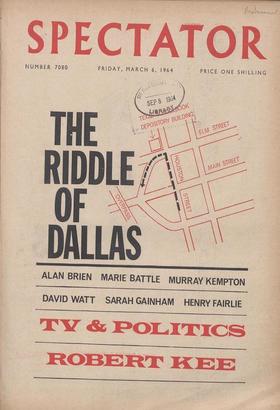 —Portrait of the Week— A LIVELIER WEEK in the humdrum

political game, with Labour's lead in the Daily Telegraph Gallup Poll tumbling to the equivalent of sixty seats. The Prime Minister continued his tours—this week the North-East,...

T HE Robbins Report made clear, and now the Plowden Report has reminded us, that not only are Oxford and Cambridge getting a growing percentage of the ablest students., but that...

By HENRY FAIRLIE W tits the birth of that baby last Saturday, another 9 lb. 6 oz. has been added to the burden which Mr. Malcolm Muggeridge must carry. It is unlikely that the...

Explosive Issues By DAVID WATT THERE are many moments, and a week in which the Gallup gap drops to five per cent is certainly one of them, when an air of un- reality begins to...

From SARAH GAINHAM BONN T HE failure of the Berlin negotiations to achieve family passes for Easter in the city on the same, or similar, terms as at Christmas has now become a...

From MURRAY KEMPTON NIIAM I, FLORIDA ° THERE was this moment, just before the bell for the seventh round for the heavyweight championship of the world when Cassius Clay got up...

From DOUGLAS LEYBOURNE BRUSSELS T HE inexorable internal logic of the Common 1 Market is beginning to work. A year ago, during a session of the European Parliament at...

THE RIDDLE OF DALLAS

By MORDECAI BR1ENBERG The author of this article, a former Rhodes Scholar from Canada, is a lecturer in sociology at Berkeley, California. T HERE are two widely held...

A Spectator at Cambridge

THE demonstration against Henry Brooke in Cam- bridge, some weeks ago, has been much lamented. As a result, the Vice- President of the Labour Club has resigned and one eminent...

By RANDOLPH S. CHURCHILL Think of the amazement there would have been only a few years ago over the engage- ment of a princess and a commoner. But, one after another, young...

By ROBERT KEE A NYONE can see that television has recently lAassumed a new importance in politics from the number of times Mr. Robin Day's name keeps cropping up in serious...

SIR,—Some time ago the Spectator printed a memor- able cartoon in which a leading member of Her Majesty's Government, as a latter-day Hieronimo, attempted to demonstrate just...

SIR,—I must leave Spectator readers to judge for themselves whether or not Mr. Ian Cameron's article was an attack on the Rank Organisation, and whether his letter or mine...

Si,—Comments so far made by me have been con- fined

exclusively to stating a case on behalf of independent British film production, based entirely on evidence submitted to and the recommendations by the Structure and Trading...

'Now all the youth of England are on fire, And silken dalliance in the wardrobe lies.' May we await the Stratford Henry V in the hope that this obvious .topical reference will...

SIR,—When I came to Oxford lust October, I noticed that

my room in this college had a lock on the door; indeed I took it for granted. I was consequently hor- rified to hear from two friends in other colleges that their rooms had no...

SIR,—You wondered (on January 10) how a 'PhD in Cornish' can have been awarded to a candidate at Columbia University. The language being 'virtually extinct . . . who, then,...

SIR,—Pierced by A. Edkins's flashing wit and pul- verised by the subtle sledgehammers of his satire, it has taken me a little time to grasp the truth of the corrective that he...

TRADE UNIONS AND THE LAW

SIR,—In his contribution to your issue of February 21 David Watt omits mention of one political group- ing which for several years has been urging re- examination of the legal...

SIR,—I have read with interest the letter from Mr. Gittings, but think he is wrong on one point at least. Richard Abbey must have known of the 'Chancery Fund' as he (together...

Sta,—My thanks to David Rees for his level notice on

my book Mud Pie. But the book (though it is, as the introduction says, a brief survey of the anti- nuclear movement's public performance and impres- sion on the British public,...

Sus,—In most of her articles from Germany, Sarah Gainham reveals a superb insight into German politics as well as feelings. But a recent contribution (Spectator, February 14)...

SIR,—In his article based on our modest submission to the National Incomes Commission last week, Nicholas Davenport has drawn conclusions rather more dismissive than we had...

to be sure of obtaining the Spectator each week is to place a firm order with your newsagent or to take out a subscription. Subscription rates : 52 weeks, LI 5s. 26 weeks, El...

A Future for the Cinema

By I A 14 CAMERON FILM people tend to see the answers to their prayers in a few magic words: co-production, di- versification, Pay TV, film schools, road shows, blan- ket...

I CAN imagine that the idea of his Study for an Exhibition of Violence in • Contemporary Art has been simmering in Roland Picasso's disruptive art at the Tate. What he has in...

114 THE way of an idol is a hard one. This week Lon- don has seen the return of Antonio, who has brought his company of Spanish dancers for a month's season to Drury Lane, and...

By CHARLES REID Three thoughts made me testy. First, what bad opera-houses town hall 'assembly rooms' make. Second, my own rate bill, doubled by re- valuation. Third, whether,...

'See Shelley plain . . . By JOHN BAYLEY ouch the reviewers-110 will be sufficient I should suppose? . . .' As he gives in- structions from Eton to arrange as much pub- licity...

THERE is a kind of ice which burns off the skin as you touch it—and- Baldwin's essays have something of that quality. I once heard him address a large student meeting in America...

I ONCE went drinking with a Dane in the Red Sea port of Eilat. It was a Friday evening, and at midnight liquor ceased to be obtainable, since it was then the Sabbath. When, at...

The Battle for the Mediterranean. By Donald Macintyre. (Batsford, 25s.) ONE reason why the often unsatisfactory dis- tinction between strategy and tactics continues to be...

The World of Harlequin. By Allardyce Nicoll. (C.U.P., £5 5s.) THE commedia dell'arte sprang from obscure origins during the middle of the sixteenth century, and quickly spread...

FOR its size, influence and accessibility, the homo- sexual world is astonishingly little documented. Kinsey, Hauser and West all fail to give more than a few squints at queer...

Fifteen churches lie here Under the North Sea; Forty-five years ago The last went down the cliff. 'You can see, at low tide, A mound of masonry Chewed like a damp bun. In the...

Gale of the World

God in Hell. By A. Winifred Wilkinson. (Gollancz, 18s.) AUDEN'S perhaps too neat distinction between Escape Art and Parable Art does fit the first three of these novels. Parable...

By NICHOLAS DAVENPORT the Hard money comes first: the interests of the wretched working people who use the stuff come second. On this occasion the £ was not even in great...

By CUSTOS LIMOUSIN enough the Bank rate decision cleared the investment air. It was felt that if a 5 per cent rate really succeeded in bringing a check to the pace of expansion...

B y [..0 T 11 BUR y T HERFI is no doubt at all that Greenwouds (St. Ives) will continue to experience a heavy demand for its products--sand, gravel, concrete and ready-mixed...

By MARIE BATTLE WHAT was it I said? She scratched her head as she sat in the YWCA lounge at Huxley Street in Brook- lyn. Always thi, was a peaceful spot to come after she had...

Off the Coal Standard? By LESLIE ADRIAN While there are a variety of motives for this reluctance to opt for clean air, undoubtedly the main one is uncertainty about the fuel...

By ALAN BRIEN Where does kindness to animals stop once you begin projecting upon them all your own dis- like of discomfort, resentment of injustice and fear of being hunted? If...