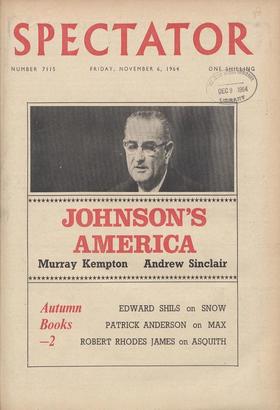 Rattle of a Vicious Man

T HE opening day of the new Parliament was completely overshadowed by one vulgar and venomous phrase from the Prime Minister. The House of Commons guards its traditions...

411ER THIRTEEN YEARS Of preparation, the Wil- nian package deal was unveiled to Parliament, P a ying lip-service to ending restrictive practices in P ld ustrY, and resolving to...

AN election result as totally foreseen as Presi- dent Johnson's victory unavoidably brings with it a whiff of anti-climax. It may be salutary to imagine, today, the waves of...

A Shock for the General

From DREW W HATEVER the long-term results of the Labour Government's economic measures, they have had one important psychological effect in France. General de Gaulle's...

WILLIAM DEAN writes: The November celebrations in Moscow this weekend are to be the occasion for a summit meeting at which all the Communist leaders, and notably the Chinese,...

11.0 BARON writes from Bulawayo: , ( Thee again Mr. Smith has marched his men the top of the hill and back again. Alice could '"ve found the conversation of the Mad Hatter r ef...

Mr. Wilson and the Commons By ALAN WATKINS One cannot help feeling that Mr. Wilson and his supporters have confused two separate procedures. First, there is the pushing...

'Mr. B' and a Scoop By RANDOLPH S. CHURCHILL The magazine was fat with lush advertising — much of it from Fleet Street. The scoop was pro- vided by that well-known practical...

By MARGARET STEWART W ITH December 1 fixed as the deadline for a national dock strike, Lord Devlin and his committee of inquiry have little time in which to investigate the...

The Ruins Left By Goldwater From MURRAY KEMPTON NEW YORE NO so Senator Goldwater is unemployed, and in apparently full possession of a party of generally unemployed...

Timothy Birdsall died, aged twenty-seven, in the summer of 1963. I never knew him. But I do know with what affection he is remembered bY the Spectator. And I admired very much...

I am sad that two of my favourite writers, Anne Scott-James and Katharine Whitehorn, should plead for Concord's throat to be cut on the grounds that it is or will be hellishly...

Last week I wrote that 'the Bulgarian Ambassador might like to prod his Government into giving Amnesty International some assistance in tracing the prisoners they seek to help.'...

ALBANY, in the Sunday Telegraph, has now an- nounced that he is Kenneth Rose, and adds that 'Quoodle of the Spectator leaves a careless trail of clues which makes me sus- pect...

Curiouser and curiouser becomes the strange affair of Mr./Lord Gwynne-Jones, the Minister of Disarmament. So he was, after all, one of the Liberal Party's defence advisers! And...

One of the (few) advantages of being a poli- tician is that you go on being a promising young man until you can begin to draw the retirement pension. Much the same seems to...

'You can't possibly wear those socks today.' 'Why not?' 'Because you've got your feet on the table again.' Even if it's the wrong side of the table, its a comforting thought....

the new cities to put together a winning combina- tion

of discontented farmers and city workers. The East was always leery of him, of his raw- ness and his phrases without meaning. Goldwater, of course, has many of Bryan's...

SIR,—May 1, with constructive intent, say a few '1 told you so's? Nine months ago you kindly printed extracts from letters I had ventured to address to the last Prime Minister....

TENSIONS ON THE LEFT SIR,—Labour won the election and the

time is hardly ripe for a realignment on the left, a Lib-Lab pact or anything like that. But in due course we may get some interesting tensions and situations. For example: I....

THE SECRET BALLOT SIR,--The correspondence about the numbers on the

counterfoils on ballot papers raises the question whether this device serves any useful purpose. Once the count is over, the ballots may be inspected only on the order of the...

R. A. Cline criticises the House of Lords lor refusing

SIR,—Whilst I 'am grateful to Mr. Walter for his letter

in your issue of October 3, 1 am horrified to learn that the process of identification of ballot papers is more complete than I thought. The passage of this Act by a Labour...

R. A. Cline refers to a sPeech I made at Winnipeg on October 16. He says that I tlescribed the Conservative Government's e stablishment of the Vassall inquiry as a deliberate...

a strange view of Ulster and shows a certain prejudice in his suggestions. He wants university representation abolished in the Parliament of Northern Ireland and, of course, one...

SJR,—I must make amends: a poetical maverick is not simply

a cow—sacred cow would seem to be more accurate. Let me try to answer your corre- spondents in a small space. Mr. Robson, for example, says that 'the fact that certain poets...

POLITICS AND THE COMMUNITY

From Doin.Robert Petitpierre SIR,—Some twenty years ago I had the privilege of hearing the City Treasurer of Birmingham define Politics as 'the care of community.' No better...

SIR,—The correspondence on 'the Movement and the Group' reflects the little cold war that has been going on for some time between the romantics who like to travel solo and the...

SIR,—May I be allowed to comment on three of the points made by Professor Antony Flew in his review (Spectator, October 23, pages 548-9) of my sourcebook, Body and Mind? 1. No...

Complete Poems was a vilification of the old-style cant criticism of Lawrence, especially the judgment that his later poems were negative and Worthless. This judgment, I said,...

Sut,---While I agree wholeheartedly with the sent. ments expressed in Alan Brie's article, it is neces- sary to point out that Section 6, para. 2 of the Offices, Shops and...

Brose in the Boilerhouse

By MALCOLM RUTHERFORD Eh? (Aldwych.) — Hay Fever. (National Theatre.) 'BIM, barn, born on his brain pan.' The line is offered to anyone attempt- ing a coherent explanation of...

Silken Skin. ('La Peau Douce': Cameo-Poly, 'X' certificate.) — London Film Festival. EXCEPT for Jules and Jim (and even that must be regularly mispronounced, depending on which...

IT is a harsh, often passionately crude, always absorbing exposition of German art in revolt which irrupts in a con- flagration of barbaric colour at the Tate Gallery. I refer,...

Last week at the New Theatre, Oxford, the Royal Ballet gave the first performance of Summer's Night, a ballet by Peter Wright, who has recently been working with Cranko in...

They told me that the Indian children were very deficient in vitamins A and C. So whenever I flew up that way or drove there I always made it a point to take along boxes and...

The Charismatic Centre By EDWARD SH1LS C IR CHARLES SNOW'S grand progress through the British professional and upper middle classes began in the provinces and has long been...

TWENTY-SIX years after his death, it is possible to attempt an assessment of Atatfirk's achieve- ment in the context of European history. In this context his essential...

By PATRICK ANDERSON I N 1905 the dramatic critic of the Saturday Review wrote an appreciation of Sir Henry Irving who died in that year. It was an extra- ordinary piece of...

I guess to be spending one's time spitting cherry-stones into iced water (counting how many float and how many sink) might not seem a task of much high reward for an ex-Colonel...

Last of the Romans?

B y ROBERT RHODES JAMES O F all political attributes, that of stature is by far the most difficult to define and com- municate. The impression of Mr. Asquith that remains with...

Running Through the Rain. By Maurice Hilliard. (Longmans, I8s.) Falling Through the Night. .By Alexander Fedoroff. (Barker, 21s.) The Raker. By Andrew Sinclair. (Cape, 18s.)...

By NICHOLAS DAVENPORT THE second salvo fired by the Wilson administration It is not for me to criticise the political content of the Queen's Speech. It was probably wise to...

By LOTHBURY K ENWOOD Manufacturing, makers of kit- chen equipment, are at last over their troubles which resulted in a net loss of £277,019 in 1962. Now the company's future...

By CUSTOS . T ulemarkets opened this week in a dismal fashion in anticipation of the Queen's Speech. Aircraft shares were particularly weak, falling about 5 per cent, because...

Lost Opportunities By LESLIE ADRIAN Mn. BROWN'S 15 per cent is British industry's reward for neglecting the sophis- ticated consumer. Take the furniture industry for a start....

Going to the Fair

By MARY HOLLAND These last three are pigeons, and the first prize in their class is fifteen shillings, which doesn't seem much to come all the way to Olympia for, but I presume...

By ALAN BRIEN THERE comes a time in every man's life (which is simply a journalist's way of confessing that the moment has arrived in his own career and he hopes to God he is...