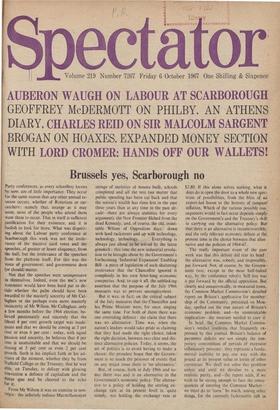 Party conferences, as every schoolboy knows by now, are of little importance. They occur for the same reason that any other annual re- union occurs, whether of Rotarians or rat-...

Most industries which rely on public ex- penditure for a large part of their business develop after a time a certain special rela- tionship with government. In spite of con-...

Radio One-derful came on the air and had a mixed reception. So did the Government at Scarborough, where Mr Jay opened with an attack on Labour's Common Market policy : Lord...

CHRISTOPHER HOLLIS ' When he was one and twenty, I heard a Liberal say, Scrap want and war and marriage And love will find a way. Scrap work and whips and leaders, And Liberal...

The skill of equestrian Harold

COMMON MARKET JOCK BRUCE-GARDYNE Since he unexpectedly quit the sheltered calm of Printing House Square for ministerial office Lord Chalfont has proved himself a man of great...

From the 'Spectator', 5 October, 1867—There was an extraordinary panic on the French Bourse on Wednesday. All sorts of lies were invented by per- sons who win fortunes by...

GREECE MICHAEL LLEWELLYN-SMITH Athens—It is ironic that two of the three people who have come to represent 'resistance' in the eyes of foreigners are regarded with consider-...

TABLE TALK DENIS BROGAN I'm pleased with the news of the discovery of a runic record of a Norwegian expedition to Oklahoma in the eleventh century. Why it should have gone...

TEACHERS JOHN PEARCE Many a trade union, rallying its members to the flag, which often turns out to be a flag of con- venience, booms sonorously the old battle-cry: 'In union...

With Philby in the Foreign Office

Letter to a grouse

COUNTRY LIFE STRIX DEAR GEORGE, You must, I am reasonably sure, be the first membes of your species to have assaulted a member of mine. I know from our brief. en- counter that...

TELEVISION STUART HOOD Watching a recording of Il Seraglio—it had been made by Austrian television at the Salz- burg Festival—I was led to wonder where the Austrians find such...

CONSUMING INTEREST LESLIE ADRIAN This week sees the publication of a bumper issue of Which? — an issue that devotes eighty- four of its pages to solid information and only four...

J. W. M. THOMPSON There seems to be a jinx on Parliament's attempts to modernise its buildings. A couple of years ago there was a remarkable scheme to tack a great extension on...

PERSONAL COLUMN PAUL GRINKE Threatened railway stations always seem to bring the nation's blood to the boil. The storm over the Euston Arch, an unusually imperial gesture from...

SIMON RAVEN Angus Wilson's massive new novel, No Laugh- ing Matter (Seeker and Warburg 42s), is the history of a disreputable upper-middle-class family and its fortunes from...

TIBOR SZAMUELY Russia is getting ready to celebrate the fiftieth anniversary of the 1917 revolution. Up and down the country preparations are in full swing: flustered factory...

PETER VANSITTART The Age of the Renaissemte edited by Denys Hay (Thames and Hudson; 6 gns to 31 December, then 8 gfis) In this sumptuous volume specialists treat various...

LORD GLADWYN Though it may not convert many doubters or opponents, this excellent and scholarly work will nevertheless confirm the faith of all 'good Europeans.' It is chiefly...

ELIZABETH JENNINGS Any writing by a great artist is of interest. This, surely, goes without saying. That smallest footnote, the most minute annotation are not only of interest...

HENRY TUBE Sparta had two kings, Rome two consuls. I suppose that the citizens of the time could hardly avoid odious comparisons between their rulers, any more than we for the...

GLORIA EVANS DAVIES , Yielding sand to yielding moss Hills and steeper streets, And bamboo hedges A neighbour opposite in a converted Monk's house With submarine-like stairs...

THE' \TRE Towards the grave HILARY SPURLING The Criminals (Aldwych) A Midsummer Night's Dream (Saville) 'To the gouty all things are gouty,' said Herbert Beerbohm Tree, and...

IN MEMORIAM CHARLES REID Sir Malcolm Sargent is gone: and suddenly there's a hollowness and a glumness in the land, as fitly happens when one dies who had more than his share...

NICHOLAS DAVENPORT I am all for enlarging the frontiers of the human mind and I have nothing against the anti-material revolution going on down the King's Road, Chelsea, where...

CHRISTOPHER FILDES This is the debut of the SPECTATOR'S expanded financial section. Nicholas Davenport and Custos continue to write weekly. So does John Bull, who—boldly...

Hands off our wallets!

BUSINESS VIEWPOINT LORD CROMER Lord Cromer was Governor of the Bank of England from 1961 to 1966. He is now a managing director of Baring's, his family's merchant bank; a...

PORTFOLIO JOHN BULL Last week I suggested some 'dos' and 'don'ts' which I thought investors ought to take into account. That sermon has produced the entirely reasonable...

CUSTOS History was made by the share markets this week, the Financial Times index leaping to 392—a rise of 39 per cent from last Novem- ber's 'low' of 284. If you stand amazed...

ADVERTISING ROGER PEMBERTON On September 19, the Minister of Transport, Mrs Barbara Castle, held a splendiferous press conference at the Festival Hall to launch, in connection...

Sir : The letter from M. N. M. Paulin (22 Septem- ber) shares the feature of Michael Watts's article which stimulated me to write in the first place, namely, a failure to...

Sir: Recently a senior regional manager was sum- marily dismissed by the board of British Railways for offering a public criticism of the board's finan- cial acumen and...

Sir: Mr Rose (Letters, 29 September) believes that 'the local Tory officials at least had the impression that being consulted on the leadership question meant something' in the...

Sir: Sir Denis Brogan's French (22 September) has betrayed him. The bands formerly worn by clergy and still by the judiciary are called Yabat; i.e. something turned down. The...

Mr Thorpe's pilgrim band Sir: It is kind of Alan

Watkins to describe New Outlook as an 'excellent magazine'; but he shows political cynicism by dismissing as a 'non-sequitur' my optimism about Jeremy Thorpe's future because he...

Sir: As a general rule, people find it hard to appre- ciate the poetry of both Bridges and Hopkins; if they cleave to the one they will hate the other. Anthony Burgess (22...

Keeping in with the Joneses

AFTERTHOUGHT JOHN WELLS There was an exhilarating and life-enhancing roar of rage in last week's New Listener — if you missed it turn on BBC sound or TV for the new...

Sir: Occasionally I go to a football match. Read- ing a newspaper report afterwards I sometimes wonder whether I and the reporter saw the same match. So with Mr Tube's...

Sir: In an article on Flaubert appearing in your issue of 1 September Sir Denis Brogan suggests that the world 'Bovarysme' could profitably form part of the English language....

Across 1 Minerva's bird earthbound in Orange country (8) 5 Arrival of a short announcement about the Archdeacon (6) 9 Ghosts might serve to cool the ardour of Kitty's admirers...