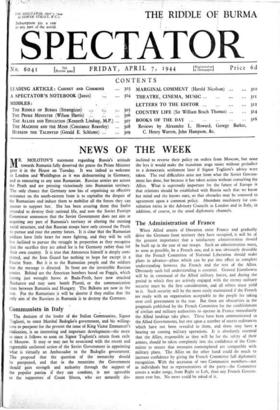 M R. MOLOTOV'S statement regarding Russia's attitude towards Rumania fully deserved the praise the Prime Minister gave it in the House on Tuesday. It was indeed as welcome in...

The Administration of France

' When Allied armies of liberation enter France and gradually drive the Germans from territory they have occupied, it will be of the greatest importance that a satisfactory...

The decision of the leader of the Italian Communists, Signor Toglietti, to enter Marshal Badoglio's government, and his willing- ness to postpone for the present the issue of...

Mr. Bevin made it clear on Tuesday that the War Cabinet is pre- pared to take the most drastic steps to discipline the strikers in various industries who are, as he said,...

The I.L.O. and Social Security

In spite of all the dislocations and upheavals of war the Inter- national Labour Organisation not only survives but continues to make substantial contributions to...

Very great potential importance attaches to a ruling given by the Supreme Court of the United States on Monday regard- ing the rights of negro voters. By the Fifteenth Amendment...

While it is necessary to state emphatically the wrong that has been done to the nation by miners on strike, it is equally necessary to try and understand why all this trouble...

T HE vote against the Government in the House of Commons last week, and die action which the Government thought it proper to take in consequence, have been considerably...

O NE of the least satisfactory tendencies in contemporary journalism is the passion for imputing motives and assuming intrigues. Take the case of Mr. Eden's position. The facts,...

THE RIDDLE OF BURMA

By STRATEG ICUS HE Russians have entered Rumania and are apparently ad- vancing on a broad front, driving panic-stricken forces before them. This operation has been developing...

By WILSON HARRIS M R. CHURCHILL'S recent broadcast was disappointing. That was the general verdict, and we may as well be frank about it. But it disappointed for two reasons,...

THE ALLIES AND EDUCATION,

By KENNETH LINDSAY, M.P. T HIS week, while the House of Commons is putting the finishing touches to a notable Education Bill, the Conference of Ministers of Education of the...

By CONSTANCE REAVELEY W HEN I began to work a capstan, I enjoyed it greatly, though it was a strange transition from a don's life. I tried to analyse this pleasure, and seemed...

WAITING on the station, holding bags and cases, Looking down the line to find a train that's two hours late ; Going in the buffet, to get some tea and sandwiches (All they've...

By GERALD E. SCHLUTER Hussein must have been about 30. He always stated his age confidently if asked, although he admitted he could not compute it to within five years. He was...

By HAROLD NICOLSON I N my early equestrian days I was taught that it was on reaching the bottom of the hill that the horse stumbled. While actually engaged upon the steep...

SHOWING at the Taller is The Battle of the Ukraine, a film more publicised for its cuts than for its content. The commercial exploita- tion of horror for its own sake in such...

" Uncle Harry." At the Garrick.

THE THEATRE AFTER commenting last week on the tediousness of murder plays in general, I have to record this week a striking exception, which I strongly recommend readers to...

From the New World.

MUSIC MESSRS. BOOSEY AND HAWKES have extended their enlightened patronage of contemporary European music—mainly British—to the productions of American composers, and while they...

Sin,—I read Alderman Tiptaft's article with interest, but I thought his gibe at fossilised councillors rather out of date, and he failed to deal at all with what seems to me the...

THE FUTURE OF CONSERVATISM

LETTERS TO THE EDITOR Sta,—While discussing the future of Conservatism, Mr. Harold Nicolson strikes at the root of many of our present discontents. Few are satisfied with...

SIR, Perhaps you will permit an admirer to express his regret that The Spectator should have lent itself to the exaggerated campaign of ballyhoo about the recent vote on equal...

THE FAMINE IN BENGAL

SIR,— Knowing for certain how long it will take this letter to reach you, if it at all reaches, I cannot help writing a few words about " The Famine in Bengal" published in your...

SIR, —You say in your paragraph under this heading that the White Paper on a National Health Service has " stolen a little of the B.M.A.'s thunder " and infer that the B.M.A....

Snt,—As a Southern Irishman who, in the last war, volunteered

on August 4th, 1914, and who, in this war, has two sons in the Allied Navies, may I say that .I have just returned from fourteen months in Southern Ireland? During that time I...

DOMESTIC SERVICE SIR, —Mary Upton accuses me of suggesting that after

the war " forced labour " (to use her expression) should be pressed into domestic service. This is an occupation to which, if she will re-read my article, she will see that I...

SIR,— Briefly in reply to Mr. J. W. Dulanty: (a) " Irish now hard at work for Britain." Surely not for Britain, but for themselves, as in the past sixty years. If working for...

SIR, —Considering that the science of building and planning is so closely connected with, and indicative of, social betterment, could not an active and lasting interest in it be...

SIR, —As a medical woman, I am interested in your correspondent's reference in a recent Spectator to the need for the London medical schools to open their doors to women...

IRONING OUT THE COUNTRY

SIR,—A speaker on the wireless recently mentioned the longing of the townsman for buttercups and daisies, but in the Paradise of the Ministry of Agriculture will there be any...

MOTOR TRANSPORT AND ROAD COSTS SIR, —The claim of the Road

Federation that £79,000,000 ought to be avail- able for expenditure in the interest of motor traffic on the roads is unsound. (t) Cost of collection should be deducted ; (2)...

THE FACTS ABOUT BOMBING SIR,—In the review of Bombing Vindicated,

by J. M. Spaight, you state: " At last we shook ourselves clear of this unworthy motive and British bombs fell on the German mainland before German bombs fell on ours. This was...

THAT curious group of international biologists, who concentrate on what they call phenology, have advised farmers to sow barley when the blackthorn opens. Those who like to...

THE ROAD TO SERFDOM

SIR,—The statement by the reviewer of Professor Hayek's The Road to Serfdom that Tolstoy " could attack with complete impunity the Tsar and the Holy Synod and persistently...

James Joyce. By Harry Levin. (Faber and Faber. 8s. 6d.) THE shade of James Joyce is probably smiling rather sadly up its sleeve at this quite excellent study, because, although...

Great Trees IN this book Mr. Richard St. Barbe Baker tells a vivid story of his visits to the wonderful forests of California. It is illustrated by 42 most striking and...

IN Sir William Beach Thomas's own words, his task as a journalist has been to bring the breath of the country into English newspapers ; and certainly he fulfils this task in a...

Ss. 6d.) IN Mr. Val Baker's competent account of the little review sinc 1914 he claims that they reflect the spirit of a literary period f more accurately than the popular...

Shorter Notices The Letters of Evelyn Underhill. Edited with an

Introduction be Charles Williams. (Longmans. nos. 6d.) UNLIKE Evelyn Underhill's study of "Mysticism " and her edition of the mediaeval Cloud of Unknowing, which can be enjoyed...

for one guinea will be awarded to the sender of the first correct ,elution of this week's crossword to be opened after noon on Tuesday week, 4pni ash. Envelopes should be...

SOLUTION TO CROSSWORD No. 263

BEhrrwtat was for some years Attorney-General of Palestine and has since 1932 held the Chair of International Rela- tions at the Hebrew University of Jerusalem. He has set...

WE have here a translation of the first part of

the memoirs of a Russian soldier who began his career as an officer in. the Tsar's Chevalier Guards and who is now a general in the Red Army. This part deals with his early life...