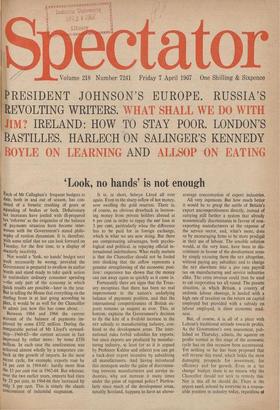 `Look, no hands' is not enough

each of Mr Callaghan's frequent budgets to date, both in and out of season, has con- sisted of a frenetic crashing of gears or squealing of brakes or both. Deflationary tax...

Vice-President Humphrey has come to Europe in President Johnson's place and that, in present circumstances, is probably no bad thing. The visit of a vice-president is an alto-...

Till Mao do us part

CHRISTOPHER HOLLIS Mrs Thomas, a member of the Kerala Peking Communist party, has been forbidden by her party to have any connections with her husband who is a member of the...

What shall we do with Jim?

POLITICAL COMMENTARY ALAN WATKINS It is possible that one of the reasons why the British political system is so stable is that con- servatives can be as much at ease in the...

AMERICA DAVID WATT Washington — It is a sound working principle in foreign affairs to suspect the advice of one's professional friends. This truth began to dawn on me when I...

dispute between this country and Spain is rapidly becom- ing serious. On the back of the Tornado case comes that of the Queen Victoria, in which the Spanish Government is so...

NIGEL LAWSON It's impossible not to feel deeply sorry for Vice- President Humphrey, one of the most liberal, articulate and, above all, likeable figures in world politics...

How to stay poor

IRELAND WILFRED BECKERMAN Wilfred Beckerman is a fellow of Balliol College, Oxford. The Irish National Industrial Economic Council, which is the equivalent of the British...

PRISON FELON The writer is at present an inmate of one of HM Prisons. He remains anonymous for his own protection. Mr Jenkins, in Parliament recently, called our prisons...

PERSONAL COLUMN KENNETH ALLSOP Like a lapsed Catholic, I shall probably in the evening of my life return to my faith and as a mark of absolution shall receive the Eucharist. It...

SIR EDWARD BOYLE There is more public discussion of the purposes of education today than ever before, yet the philosophy of education is still in a very un- developed state....

Pity and terror PATRICK ANDERSON A Season in the Life of Emmanuel Marie- Claire Blais translated from the French by Derek Coltman (Cape 21s) 1 Want a Black Doll Frank Hercules...

LORD HARLECH With Kennedy Pierre Salinger (Cape 36s) To all those who have long since abandoned hope of keeping up with the flood of books on President Kennedy, his life and...

JOHN ROWAN WILSON It is becoming increasingly apparent that man's most urgent problem, in the second half of the twentieth century, is not to understand the atom or the...

NEVILLE BRAYBROOKE This symposium offers a number of definitions of God. James Mitchell, its editor, has put to himself, and to nine of his friends, the follow. ing questions...

ELIZABETH JENNINGS Selected Letters of Charles Morgan, edited and with a memoir by Eiluned Lewis (Macmillan 42s) Charles Morgan is a writer who is almost com- pletely out of...

PENELOPE HOUSTON A Man for All Seasons (Odeon, Haymarket, `U') How to Succeed in Business Without Really Trying (Astoria, 'LP) 'I cannot tell whether I should call 'aim a...

CHARLES REID Two of last week's Royal Festival Hall concerts made a three-cornered historical conjunction as well as being rich or engrossing on their own account. Rudolf Kempe...

Regionalism no substitute for growth

MONEY NICHOLAS DAVENPORT Recently on the Bec Third Programme Mr Wilson was at pains to justify his decision to set up the Department of Economic• Affairs `as a sort of balance...

CONSUMING INTEREST LESLIE ADRIAN The late and sadly long-forgotten C. E. M. Thad once referred to British seaside resorts as 'the drainage system.' He meant that they dutifully...

CUSTOS The new Stock Exchange Account, which covers the budget, opened firmly and the general impression is that if Mr Callaghan introduces a neutral budget next Tuesday the...

Sir: It is difficult to resist the conclusion that Mr

Enoch Powell was not so much writing a defence thesis for Britain in your issue last week as express- ing irritation with Mr Denis Healey's tortuous verbiage in the Commons...

Sir: Long may Mr J. H. Plumb go on reminding your readers about the political genius of Walpole, but when he suggests (17 March) that posterity owes little or nothing to the...

Sir : Your article 'A nation unprepared' (31 March) states that the 'Torrey Canyon' was 'equipped with every modern navigational device.' This is not so, for she was not...

Sir: I suppose one can assume, human nature being what it is, that a sermon from a reformed sinner cuts more ice with most of us than a sermon preached by a saint. That Mr Hogg...

Sir : It is a frequently noted paradox that those who are paid the most for writing and talking about education are furthest from the classroom, and it is significant that your...

Sir: The article 'Supermarket style' shows that John Rowan Wilson is out of touch with modern Ges. Unfortunately, so too are many other writers on the subject, including...

on the nuclear deterrent is to be warmly welcomed. It follows logically, of course, from his equally welcome questioning of Britain's extra-European defence commitments in his...

JOHN WELLS Adam and Eve and Pinchme went down to the river to bathe; Adam and Eve were drowned, so who do you think was saved? Anon. Having missed the first showing of Dr...

Sir: Throughout this correspondence I have not seen a single reference to what Mr Raven's son as an individual human being is like—in terms of congenital temperament and...

Sir: Poor St Benedict! He must be surprised at the

two babes in the Downside woods rallying to Simon Raven's cause (Letters, 24 March). I never miss Raven's articles. This latest, by Polonius out of Lord Chesterfield, was no...