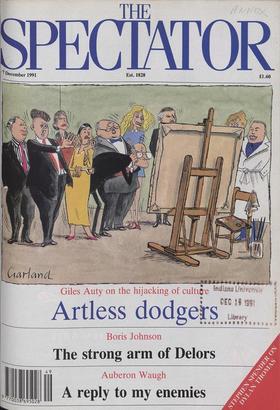 T he Home Secretary, Kenneth Baker, made constitutional history by being found guilty of contempt of court while carrying out official duties, in that he failed to return to...

Coming soon to a theatre near you: The Secret Views of Walter Major SIMON HEFFER Labour said it proved the unreliability of the Prime Minister, but a more benign...

WILLIAM DALRYMPLE avinder Singh, son of Punjab Singh, Prince of taxi drivers, may your beard never grow grey! Nor your liver cave in with cir- rhosis. Nor your precious...

A glimpse into the Black Hole lying in wait AUBERON WAUGH T wenty-four years ago, when I was enrolled as The Spectator's political corre- spondent and started the regular...

THE TRIUMPH OF ANTI-CULTURE

Giles Auty exposes the sham of modern art, and suggests a remedy THE FIRST figures I drew at the age of three or four were in profile. Half of them had long proboscises,...

persist.. MY PATIENT announced, as she came through the door, that she was going to kill herself, and it was none of my busi- ness why. `Am I permitted, then, to enquire how?'...

Charles Glass finds that President Assad has his own way of mobilising popular support Damascus IT RAINED here on Monday, a steady drizzle that drenched thousands of posters...

THE MAKING OF A PRESIDENT

THE EARS OF A CROATIAN COLONEL

Alec Russell listens to an ambassador's self-serving tales of the Yugoslav war Dubrovnik BY THE Renaissance balustrades of Zadar, like an Italian grandee holding court,...

Noel Malcolm despairs of the prospects for the independent Ukraine, with no change at the top Kiev IT WOULD be nice to report that there was dancing in the streets when the...

Time to stop chattering about Aids PAUL JOHNSON O ne good rule in contemporary life is: never believe anything you read about Aids. It is just conceivable that it may be 100...

I COLLECT forms of words which mean their opposite: 'It gives me no pleasure to say this', 'With great respect' or 'I am bound to say'. The business equivalent is `Pending...

THE Treasury claims a small Euro-mone- tary triumph: the sovereign's head can remain on notes and coins. Decus et tuta- men, as the inscription on the rim of the pound coin puts...

COHESION funds? You willl shortly be invited to subscribe to them. Well, not exactly invited. These are the funds that will be payable in European countries which would...

Those who won't learn from money's history may be condemned to repeat it CHRISTOPHER FILDES T he Prime Minister approaches the Maastricht summit like an experienced drinker...

SO MUCH for the Maxwell boys taking charge. The banks had taken charges, and now they have taken control. The tough and experienced John Melbourn of Nation- al Westminster is...

Sir: Neil Lyndon does not, to my mind, adequately explain

the confusion in the minds of both the Government and the electorate. The Catholic 'minority' is only minor in the sense that it was deliberately hacked away from the vast...

Britons never shall be

Sir: With Croatia in mind, we in this coun - try need to find a dissuasive name for a fed- eral Europe. I would suggest Euroslavia. Irfon Roberts Priory Wall House, 3 Cockshut...

Sir: Here in what you would call the Frozen North, we have learned something about dressing for cold weather. Simon Courtauld ('Fur better or worse', 23 November) should be told...

LETTERS Cloud in the west

Sir: I am sure I was not the only reader to be flabbergasted by the crudeness and inac- curacy of Mr Lyndon's tirade on Ulster CA disarming question', 30 November). The...

The Beast to Beauty

I know how long it's been, Beauty, alone. I know by how the orchard's overgrown, By generations of increasingly Multi-coloured starlings, and by me. Not by my face, which stays...

SPECIAL OFFER "Why have we had to wait 20 years for this book? Like the glorious, festering piles of stone he draws, John Glashan is a great national monument that should be...

John McEwen IMPRESSIONISM: THE PAINTERS AND THE PAINTINGS by Bernard Denvir Studio Editions, £29.95, pp. 424 A s a former head of the Department of Art History at Ravensbourne...

Harriet Waugh I t is particularly heartening to be able to welcome Simon Shaw's Bloody Instructions (Gollancz, £13.99). His first novel, Murder out of Tune, was a stunning...

Cambridge. October sunshine. In my own Autumnalty I hobbled down to King's To stare at its chapel's energies in stone Spread overhead in counter-balancings Of flippancy and...

Almost top of the pops, word-famous

Stephen Spender DYLAN THOMAS by George Tremlett Constable, £16.95, pp. 206 G . eorge Tremlett is the author of 17 biographies, most of them of rock stars (John Lennon, Marc...

More Books of the Year

T he most original book this year, is Autogeddon by Heathcote Williams (Cape, £12.99). Divided into two sections, and wonderfully illustrated, the first part is the title piece,...

And this little pig had too much to drink

A selection of recent cookery books

Jennifer Paterson A rabella Boxer's Book of English Food (Hodder & Stoughton, £17.99, pp. 270) is a very welcome arrival in the midst of mostly foreign cuisine books. The...

The Househusband Away on Poetry Business

It's the first morning off for an age, With no one to please but my shadow: I could watch a pink morning uncage And smoke a cigar at the window, Be that middle-aged poet at...

M usic What about Arnold? David Mellor feels it is time one of our great contemporary composers received his due milestone marked by concerts in London and elsewhere and an...

Giles Auty will resume his Exhibitions col- umn next week.

An individual voice Deirdre McMahon E ver since he joined the Royal Ballet in 1979 , Jonathan Burrows has occupied a rather singular position within the compa- 11 Y. Besides...

Bottom of the class Martyn Harris T he first episode of Class Rule (BBC 2, 9.50 p.m., Tuesday) last week got off to a sluggish start, with a string of politicians predictably...

The Madness of George III (Lyttelton) Purple passages Christopher Edwards A an Bennett's skilfully constructed and interesting new play is set in the years 1788-1789. This...

Harriet Waugh will be back next week.

Barbarians at the gates Taki I New York f memory serves, the West Palm Beach courthouse lies six rugby fields away from the Kennedy House on Ocean Boulevard. I once spent a...

Home, sweet home Jeffrey Bernard F rom where I am sitting, facing south and from right to left, I can see the Regen t Palace Hotel, the Swiss Centre, the Odeon Leicester...

Brought to book Zenga Longmore I don't know what's come over public libraries these days,' my sister Boko remarked. 'All the shops, especially those selling food, are staying...

I WAS trying to think up some nice pink dishes for Gaudete Sunday, mid-Advent Sunday, one of the only two times in the year when the priests' vestments are pink with pleasure. I...

GMA RIP Raymond Keene T he Grandmasters Association, of which so much had been hoped as an organiser of top-class tournaments and as a counter-weight to Fide in world chess...

12 YEAR OLD SCOTCH WHISKY COMPETITION xlVAS REGAV (2 YEAR Down Memory Lane Jaspistos I n Competition No. 1705 you were pre- sented with the given opening lines of the third...

To enable competitors to economise on postage, entries for one or more weeks of the competition and crossword may: be posted together under one cover addressed 'Competition...

This prize was recently awarded by a self-appointed panel of female judges for the most outstanding example of 'male chauvinist writing' in fiction. Neil Lyndon in The Spectator...

Perfect chemistry Frank Keating IN DAVID'S gurgling Colemanspeak it is reallyquiteremarkable' that a diverting lit- tle quiz has become the most consistently Popular programme...

Q. I work in London for an American- owned private intelligence agency. I have been personally responsible for uncovering s m'ne of the most highly publicised financial c...