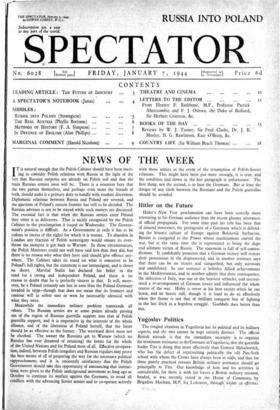 I T is natural enough that the Polish Cabinet should have been meet- ing ing to consider Polish relations with Russia in the light of the fact that Russian outposts are already...

Hitler on the Future

Hitler's New Year proclamation can have been scarcely more reassuring to his German audience than the recent gloomy utterances of official propaganda. For some time past his...

The tangled situation in Yugoglavia has its political and its military aspects, and the two cannot be kept entirely distinct. The official British attitude is that the immediate...

There is an undertone of ultimatum in the assertion "we shall never surrender our schools " with which the Roman Catholic Bishops close the statement which they issued on...

For General Montgomery there is one element of regret in his new appointment, that it parts him from the Eighth Army, the " Desert Army " from which his name can never be...

The Royal Society was admirably well advised in taking advantage of the presence of one of its honorary secretaries, Professor A. V. Hill, at Delhi on an official mission to...

The news of a plot of " Fascist Republicans " in Sardinia to incite the islanders to throw off allegiance to the King shows that Fascism may not necessarily have been killed by...

The Quality of Teachers

At the annual general meeting of the Headmasters' Association, which welcomed and pledged its support to the Education Bill, much stress was laid on the importance of enhancing...

THE FUTURE OF INDUSTRY

W ITH its report on Work : the Future of British Industry, the Conservative Party has this week made its own specific contribution to the outstanding domestic problem of the...

S INCE it is clear that the complete eliminatiOn of Berlin is definitely in prospect, it is worth while trying to estimate what that may mean politically—quite apart from its...

By STRATEGICUS T RE continued advance of Vatutin's forces, it need hardly be said, is creating great difficulties for the Germans ; but clearly this mighty offensive which may...

. By PHYLLIS BOTTOME • of Latin and Slav, twisted firmly into the Stam (tribe) of an old Germanic culture which has built itself up from Western Chris- tianity and Southern...

By F. A. SIMPSON A QUARTER of a century ago, towards the end of the last Great War, there was published a volume Which struck a new note in English biography: Lytton...

IN DEFENCE OF ENGLISH

By ALAN PHILLIPS Over this imperfectly defended territory in the realm of English culture the attack has an easy time. If we ask who is directing this attack, and where does it...

By HAROLD NICOLSON M UCH has been written this week upon the themes of Lutyens the great architect and Lutyens the entrancing companion. By the public he will be remembered as...

THE THEATRE TERENCE RarrmAN, th° author of Flare Path and

other successful theatrical pieces, has nothing of any moment to say, but a sense of the theatre and a light touch enable him in his latest comedy, While The Sun Shines, to...

THE POT TER THE potter kneads the stubborn clay,

Binding it into unity ; Scatters water, kneads again To mollify the obdurate grain And tame and temper to command Of dreaming mind and shaping hand ; Then spins the wheel with...

EVEN Mr. James Agate would be bound to agree that This is the Army is a slice of popular, hand-holding entertainment more suited to Stage than screen. The reason lies not in the...

I AM the ploughman. In the beginning I scratched the desert with a crooked stick, Coaxing the half-grudged smile of plenty, And I also rejoiced, seeing Earth's quick...

LETTERS TO THE EDITOR his article of December 31st, Commander King-Hall discusses :tier alia the question of whether the continuation of a Coalition Govern- ent with an agreed...

Sm,—Although so young may I dare write to yon on

this matter? I am a pupil of a well-known secondary school. Difficult as it is with " prep" and a public "examination " the girls of my form (V) have a keen interest in national...

Sm,—The two signatories of this letter have on occasion differences of judgement as to the immediately practicable application of sound principles of planning to this or that...

Sin,—Doctor Maxwell Gametes letter on " Employment for All " shows an appreciation of some important economic factors, but I think his scheme will be more applicable to post-war...

SIR,—Don't you think the reason why women prefer to read

fiction is that they are much more realistic and practical than men, and therefore cannot lose themselves in the pursuits of inventing Utopias, cutting down the universe to fit...

Sett,—I agree regretfully with some of Miss Elizabeth Dunn's conclusions in her article Women's Minds," but I do protest against the main basis of her argument that ficuon is...

SIR,—" Janus " merits our thanks for his comments (in The Spectator of December 31st) on the depth of public feeling displayed in recent days in regard to the Prime Minister's...

SIR,—While Mr. F. D. Merralls is writing to say that Fascism hi not been "chosen " by the Italian people, he surely cannot say the sa of National-Socialism. The election...

HEAD AND TAIL ra SIR,—It is very regrettable that it

is not so easy in human society as a serpent to tell which is, or ought to be, the head and which the tail. N country started the last war with so magnificent a hierarchical...

SIR.—I hav a mild quarrel with " Janus " for the following sentence from his Notebook, which, whatever its amiable intention in regard to India, would scarcely be read with much...

SIR,—In view of the effort we are all making to promote understandin with our American allies, I would be grateful if some of your reade would explain the following phrases...

SIR,—I fundamentally agree with the opinion by Mr. Geoffrey Mander, M.P., expressed in your columns on December 31st, 1943. Never and under no circumstances should Europe see...

Our Earliest Poetry THE early death of Gavin Bone last year was a real loss to scholar- ship and in particular to St. John's College; Oxford, of which he was Fellow and Tutor....

The World We Mean To Make : and the Part

of Education in Making It. By Maxwell Garnett. (Faber and Faber. los. 6d.) An Optimists' World THE buoyant optimism of Dr., Maxwell Garnett's title is fully sustained in his...

A Week With Gandhi. By Louis Fischer. (Allen and Unwin. 6s.) MR. FISCHER did a plucky thing when he went to spend a week at Gandhi's Ashram in the height of the hot weather of...

Retrospect of an Unimportant Life. By Herbert Hensley Henson. Volume II, 1920-1939. (Oxford University Press. 21s.) THE adjective which Dr. Henson has introduced into the title...

My Travels Through Chad. By Pierre Olivier Lepie. (Murray. los.)

CAPTAIN LEPIE, who has already written about his experiences with the French Foreign Legion at Narvik, was appointed Governor of Chad Territory by General de Gaulle in 1941 and...

Grig in Retirement By H. B. Creswell. (Faber and Faber. 9s. 6d.) THERE is little to say about fiction this week. Mr. McLaverty, author of Call My Brother Back and Lost Fields,...

No Rain in Those Clouds. By David Smith. (Dent.. los.

6d.) THE best part of this pleasant book concerns arable farming during the last quarter of the 19th century in a part of East Anglia famous for its strict attention to the...

Shorter Notices The Resources and Influence of English Literature. By

the Most Rev. William Temple. (National Book Council. 2S.) THIS little book, whose value is out of all proportion to its size, contains a lecture delivered by the Archbishop of...

SOLUTION TO CROSSWORD No. 250 SOLUTION ON JANUARY 21st

The winner of Crossword No. 250 is A. McD. GORDON, Bridge House, 3errards Cross.

Token. for one guinea will be awarded to the sender of the first correct lawn of this week's crossword to be opened' after noon on 'Tuesday week, (unary Illth. envelopes should...

AN almost springlike welcome is being extended to the New Y . At the corner of the bed the invincible lungwort shows a nuns of pink flowers. Half-way up the bed, on a slope cut...

THE story of the siege and battle of Stalingrad is here told by a number of Russian war correspondents and officers of the Red Army. It is too early yet for anything like a...

The Tree of Life. By H. J. Massingham. (Chapman and

Hall. 8s. 6d.) MR. MASSINGHAM here departs somewhat from his usual line of country, and pursues a subject first suggested to him in a letter he received from a naval...