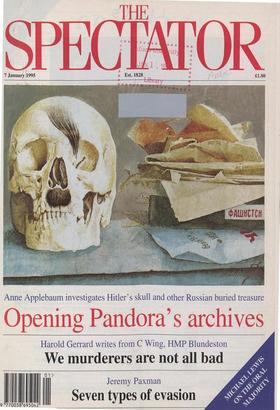 F rederick West hanged himself in his cell at Winson Green prison when he should have been eating chicken soup and a pork chop; he had been charged with 12 murders, including...

The appalling consequences of Labour policy for the likes of Blair the elder BORIS JOHNSON Looking back at that happy Blair family in Scotland in the 1960s, one has to face...

A.N. WILSON M y old tutor at Oxford, enlisted by David Cecil and others to express public support for the British and French inter- vention in Suez in 1956, happily signed a...

When will these babyish, petulant Eurosceptics see sense? AUBERON WAUGH J oy shall be in heaven over one sinner that repenteth more than over ninety and nine just persons...

THE SELLING OF THE 20TH CENTURY

Anne Applebaum reveals that Rupert Murdoch's empire has gained exclusive rights to say what the Soviet Union did with Hitler's remains; it's just part of the fierce battle over...

A 40 BILLION A DAY HABIT

Robert Haupt examines the financial consequences of the Chechen war, and argues that the West should reconsider its aid to Russia Moscow THE RESPONSE of western governments to...

SOME New Year pet hates. Mr Neville Barwick of Bath hates advisor for adviser 'which we shall have to accept because bad always drives out good'. I agree that this Gresham's...

persist.. . THE ENTIRE nation has been plunged into deep, indeed inconsolable, mourn- ing over the untimely demise of Freder- ick West. News of his death came as a shock, to me...

SAYING WHAT EVERYONE THINKS

Noreen Taylor meets the Queen's former private secretary Lord Charteris, still with a keen finger on the royal pulse AS A CUSTODIAN of royal secrets there are few to rival the...

WE MURDERERS ARE NOT ALL BAD

Harold Gerrard, serving a life sentence for the murder of his wife, says that prison doctors are, on the whole, worse than the killers they treat C Wing, HMP Blundeston,...

Jeremy Paxman gives an insider's account of the exasperating techniques used by politicians who don't want to answer a question FOR ALL the disdain the one affects for the...

BANGING THE DRUM FOR HEPTONSTALL

Continuing our series on English counties, Paul Barker reveals the fierce rivalries in the West Riding of Yorkshire THE EXCELLENT city art gallery in Leeds is packed with the...

Fond memories of a playwrights' convention at Buckingham Palace PAUL JOHNSON P laywrights fascinate me. Though they spend their lives, as I do, dealing in words, they fling...

Stay on the platform and wait for the Circle Line the Tax Express is going backwards CHRISTOPHER FILDES T he party of low taxation has set us to work for the tax-gatherers...

Sir: It is good of you so freely to indulge Paul Johnson's obsession with the Guardian, and its editor Peter Preston. He has now written innumerable times on the subject both in...

Sir: With respect to William Trevor (Books, 17/24 December) Beachcomber did not die in 1949. He died 30 years later, during the Winter of Discontent. The man who told him he...

Sir: Was Noel Coward really a spy, as John Simpson asserts? (Noel Coward was a spy', 17 December). His evidence is not too good. According to his account Coward was recruited...

Sir: Among William Boyd's observations on Sir Frederick Treves's surgical practice (`How King Edward VII nearly wasn't', 17/24 December) was the conclusion that the King would...

Sir: Your story about exclusion of Jews from clubs in America (Taboo or not taboo, that is the question', 19 November) recalls the furore in the tabloids when a dis- tinguished...

Sir: I refer to the letter of the German Embassy's Mr Wolfgang Trautwein (Let- ters, 17/24 December) concerning the arti- cle, 'Is this what we mean by European Union?' (3...

Sir: F.R. Leavis would surely have seized upon John Bayley's article about the Archers (Books, 17/24 December) as an instance of the slack standards which pre- vail at Oxford....

Doctor in the House

Nicolas Barker GLI OBILISCHI EGIZI: POLITICA E CULTURA NELLA ROMA BAROCCA by Giovanni Cipriani Leo S. Olschki, L45, 000, pp. 205 We have one on the Embankment, they have them...

Bruce Bernard ANDRE KERTESZ: HIS LIFE AND WORK edited by Pierre Borhan BullfinchlLittle, £45, pp. 367 T me, Andre Kertesz is not only the `photographer's photographer' as...

Fantasy with one foot on the ground

Adam Sisman THREADING MY WAY by Peter Calvocoressi Duckworth, i17.99, pp. 213 T his is a gruff, old-fashioned memoir of a distinguished, if not outstanding, career: Eton,...

Museums The road for the Tate Laurence Marks contemplates a conversion for the millennium I n the Piranesi-like half-light of a December afternoon, the rusted turbines,...

Slays! (Hampstead) The Threepenny Opera (Donmar Warehouse) Elisabeth (Theater an der Wien, Vienna) 0 show me the way . . . Sheridan Morley o r those of us, and we are...

Vanya on 42nd Street (`U', Curzon Mayfair) Deprived lives Mark Steyn T he film of the play: either you 'open it up' — show all those car chases and earth- quakes the stage...

A row is growing Ursula Buchan rom beyond the borders, which sepa- rate horticulture from the real world, can be heard the distant rumble of a row. It concerns the fate of the...

Thaw in law Nigella Lawson A ctors always love playing barristers. What they extract from these roles is sheer essence of showing off, the necessary germ from which acting...

Snow princess Taki Gstaad T hirty years ago I climbed the Wassen- grat daily in the company of Irwin Shaw, who had left his beloved Klosters to be near his son Adam, back then...

Cooking my goose Jeffrey Bernard h e lead up to Christmas was even a lit- tle worse than the celebration itself. A few days before my goose was cooked I was given a...

A tale of two cats Holly Budd T e first casualty of 1995 can be chalked up to Byron, the office cat. I don't suppose many offices still have cats; modern `Who says you can't...

Tricks of memory? Nigel Nicolson A Roman senator would employ a slave with an exceptional memory to remind him of the names of people encountered in the street. He was called...

OFF WE GO again, a new year to broach, 1995 no less, and I hope you all have a ball. I find it extraordinary to think we are so near 2000, which seemed almost impossible to...

Conundrum Raymond Keene THE ENGLISH team's performance in Moscow at the Chess Olympiad ultimately conformed precisely to their pre-tourna- ment seeding. The Russian 'A' team,...

JSIWLE NW SCOTCH VINO URA COMPETITION Self- Jaspistos IN COMPETITION NO. 1862 you were invited to supply an extract from a book entitled What to Say When You Talk to...

A first prize of £25 and a bottle of Graham's Malvedos 1979 Vintage Port for the first correct solution opened on 23 January, with two runners-up prizes of £15 (or, for UK...

A barrage of baloney Frank Keating AS I WRITE, I pray that the performances at Sydney of three north countrymen, Atherton, Crawley, and Gough, might have turned the Ashes...

Dear Mary.. . Q. I am a probation officer. Recently, the courts have entrusted to my care a noble- man of vast possessions. I had to cancel our first appointment as our limited...