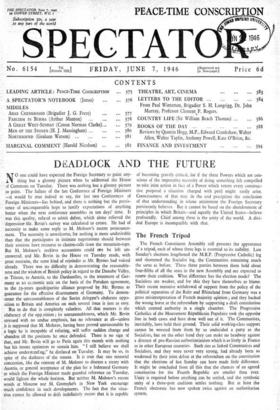 The French Constituent Assembly still presents the appearance of a tripod, each of whose three legs is essential to its stability. Last Sunday's elections lengthened the M.R.P....

Nobody ever thought of Mr. Truman as a powerful Democratic candidate for the 1948 Presidential election. But few observers would have forecast that he was the man to wreck what...

The sub-committee of the United Nations Security Council which has been considering the indictment against the present Spanish Government presented by the Polish delegate, Dr....

The Labour Party's Whitsuntide Conference is everybody's business. The limitation of Parliamentary debate due to the pressure of a large legislative programme, and the evident...

The long report submitted to the Economic and Social Council of U.N.O. by the Special Committee on Refugees and Displaced Persons makes depressing reading. The Committee,...

Not a week passes without its crop of food news. And yet nothing new seems to occur in the real food situation. Last week's food debate in the Commons served to reveal that the...

T HE statement on the immediate future of the conscription system made by the Minister of Labour last week is limited to some extent in importance by the fact that the...

The vogue of Trollope is remarkable. Mr. Michael Sadleir, by

reprinting his most admirable biography-cum-commentary of the novelist, has done something to contribute to that, and so has Mr. Charles Morgan in his introduction to Williams...

to Mr. Churchill, with all respect to anyone who has a good word to say for the officially-imposed celebrations on June 8th (I have only, myself, found one such), I remain of...

The Government, I observe, is fostering the Travel Association's "

Come to Britain" campaign with a fairly substantial subvention. But it seems to be doing its best, by refusing visas, to prevent any- one from coming to Britain except on the...

There are, I am reminded, two sides to the German

prisoner question. One side—a growing repugnance to the employment of forced labour in this country a year and more after the end of the war with Germany—has found adequate...

Some time ago I expressed regret that the British Universities

Press should so style itself, in view of the fact that it is a purely commercial concern (I believe a very successful one) with no connec- tion at all with any university. A...

When I was a very young journalist I was given

one piece of advice by a very shrewd old journalist. "Always write large sums in figures," he admonished me, " not in words. Figures impress, words don't." He was perfectly...

M R. BEVIN'S lengthy speech which opened the foreign affairs debate on Tuesday seemed almost deliberately flat. The Foreign Secretary spoke for over an hour and a half, reading...

By ARTHUR MANTON HE most pressing issue in the politics of Burma today is the T controversy between the Government and the Anti-Fascist People's Freedom League over the claim of...

By CANON NORMAN CLARKE T used to be the custom to print in the introductory pages of the I Book of Common Prayer a table giving the dates of the movable feasts for a period of...

MEN OF THE STONES

By H. J. MASSINGHAM T RAVELLING up from Old Sodbury to Nailsworth in the south-western Cotswolds, I was struck by two phenomena which jutted out like bluffs in a jumble of...

By GRAHAM WATSON I N the period before the war, when the journalistic silly season lasted throughout the year, a competition was held in one of the newspapers to discover the...

By HAROLD NICOLSON F EW functions in life are more disheartening than that of being a wet blanket. Even a dry ,blanket, be it ever so pink and fleecy, is seldom an object of...

Tan SPECTATOR, printed on thin Bible paper and weighing under one ounce, can now be sent by air mail to civilians any- where in Europe (except Germany) for £2 75. 6d. per annum,...

" The Winslow Boy." By Terence Rattigan. At the Lyric Theatre. To say that The Winslow Boy is a dramatisation of the Archer- Shee case is to repeat what is already well-known ;...

ALL but four of Miss Anna Mayerson's recent paintings, now on view at the Leger Galleries, are given the generic title " Studies in Movement." The movement she seeks, however,...

" RUSSIA UNLIMITED " sllt,--If Mr. Crankshaw thinks that the " unexpressed conclusion " of my argument is that we should fight a preventive war against Russia now, I have...

SIR, —The phrase " Palestine problem " is often heard. Is there such a problem? The facts and realities of Palestine present no problem at all, in the sense of an intellectual...

Sra,—In discussions on the relation of Russia to the western

democracies there is often an amazing omission of reference to the result of the discovery and use of the atomic bomb. Suppose that Russia, having been first to manufacture the...

Stfi,—Mr. Ionides' interesting article on the J.V.A. leaves out some of the data which are needed to enable an irrigation engineer to appreciate his arguments. Taking such...

SIR,—Mr. Norman Paterson's article in your issue of May 31st seems to ignore an essential factor. There is an Allied, not only a British, policy towards Germany, economic and...

Snt,—It would be interesting to ask secondary-school masters two ques-

SIR,—The letter from Sir Andrew McFadyean in The Spectator of May 31st prompts me to ask again for space. He, a leader of one section of Liberals, illustrates my point. The...

PASSING OF THE SCHOOL CERTIFICATE

Sta,—Your readers may rest assured that the demand for the abolition of the School Certificate examination is by no means wholeheartedly sup- ported by schoolmasters in the true...

Sta,—In November, 1944, while a German prisoner, I was rescued by Chetniks under the command of Major Marcovitch, near Kossovo Mitro- vitz, in Serbia. A more valuable British...

SIR,—After reading Anthony Hawthorn's article on "Formation Colleges " in The Spectator of May 24th, I was again disturbed by the rather extrava- gant claims periodically made...

SIR,—In a democratic country the existence of a centre party

is fatal because it can be succeeded only by the extreme Right or the extreme Left. The struggle between the Nazi party and the Comsnunist party in Germany in the early...

JUNE came in like September. The lawn was well-patched with spider- webs, bedewed with gems, and the sun slowly conquered the dampness. Yet it is an early June. One rose in the...

by military occupation, has been distressing, especially in my experience in the lovely North Devon village of Woolacombe and other seaside places to the south of it. I hear...

Parts of a plant sent me for identification proved to belong to the bush acer negundo, which has a seed like a maple but the leaf of an elder. It is worth growing. If not so...

INDIA AND THE EMPIRE

Sig,—Field-Marshal Smuts, in his recent broadcast on Imperial unity, forgot to mention that in his own country no Indian can take up mining, engineering or building. He cannot...

WHAT A PLACE TO LOOT !

Sm,—Would Mr. Harold Nicolson kindly tell us where we can find the story which he quotes, of how Marshal Blucher in 1854, surveying London from the top of the Monument, "...

THE ART OF REVIEWING

SIR, —In more than half a column of The Spectator (May 24th) Kate O'Brien calls Auto-da-Fe " appalling," " magnificent," " unbearable," "mad," "practically indescribable." She...

In a rough, well-treed garden within a village that now is almost a town a very strange struggle has been' watched and listened to day after day. It has been so noisy that...

Sig,—In your issue of May 31st Mr. John Prickett asks whether there exists a library to preserve all films worth keeping. This is precisely the function of the National Film...

Sta,—In associating myself with Professor •Pigou's protest against news- paper intrusions on private grief, I suggested that such protests would recur as long as the public made...

An old country and botanists' puzzle has been more or less solved by recent research. The creeping thistle continually appears in quantity on newly disturbed ground. For...

Another Peace Conference The Congress of Vienna. By Harold Nicolson. (Constable. 18s.) "HisTom( teaches us," writes Mr. Nicolson, " and invariably we disregard her lesson, that...

The Cossacks. By Maurice Hindus. (Collins. 10s. 6d.) DURING the bitter days of the Russian retreat, one of the few attrac- tive and inspiring sights to be seen in the drab...

The Loan That Nobody Loves

IF anybody wants to know all the arguments against the Washing- ton Loan Agreements, including one or two brand new ones, Mr. Amery provides them. Those who would also like to...

Prater Violet. By Christopher Isherwood. (Methuen. 5s.) Tim is Mr. Isherwood's first book for seven years. During that time he has been in California, writing film stories and...

SOLUTION TO CROSSWORD No. 376

ONE does not know—or at least this reviewer does not—approximately when Beethoven's Sonata No. 2 in C Sharp Minor, Opus 27, became popularly known as " The Moonlight." But the...

By CUSTOS HAVING expressed a hopeful view of the home railway outlook on several occasions in the past, I do not feel that the latest develop- ments call for any different...