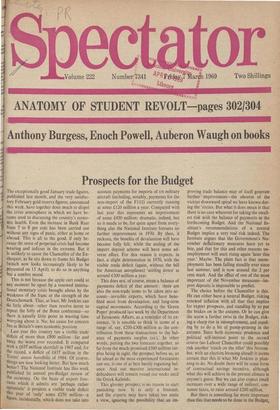 Prospects for the Budget

The exceptionally good January trade figures. published last month, and the very satisfac- tory February gold reserve figures, announced this week, have together done much to...

Half a victory for the peasants

The abandonment of Stansted as a possible site for London's third airport is a victory for the popular movement which acquired the status of England's latest Peasant Re- volt:...

Clashes on the 5,000-mile border between Russia and China resulted in the first publicly admitted fatalities; the usual reciprocal denun- ciations and demonstrations followed....

Back to the unprincipled front

POLITICAL COMMENTARY AUBERON WAUGH Left-wing revolts against the Government now conform to a rigid pattern, and so does the re- porting of them. After Monday's vote on Mrs...

ISRAEL STUART HOOD I said once to an eminent Israeli scholar that to work, as I was doing last summer, in his tightly knit society gave me some inkling of what the Greek polis...

NIXON-2 JOHN GRAII AM Washington—Wherever he goes, whatever he says, President Nixon is greeted with polite respect, even admiration. Senators and leader- writers scramble to...

• NIXON-1 MARC ULLMANN Paris—To say that General de Gaulle is satis- fied with the result of Mr Nixon's visit to Europe would be a massive understatement. He is enchanted with...

In defence of Concorde

TECHNOLOGY ANGUS MAUDE, MP Last week Concorde at last made its maiden flight, but the argument over whether or not the whole project should be cancelled con- tinues. Some...

NIGEL LAWSON With the retirement in a few days' time of David Bruce as American ambassador in Lon- don this country loses a very special friend. Appointed by President Kennedy...

The anatomy of student revolt

PERSONAL COLUMN JOHN SEARLE In several years of fighting for, fighting against and simply observing student revolts in the United States and Europe, I have been struck by...

THE PRESS BILL GRUNDY You will not have forgotten last year's cele- brated fight for the heavyweight championship of the News of the World. In the red corner, Battling Bob...

TABLE TALK DENIS BROGAN By unforeseen good fortune, I found myself a short while ago dining in the Midlands and sit- ting next to a real earl. He was none of your promoted...

ANTHONY BURGESS Martin Seymour-Smith's aim in Poets Through Their Letters is to show chronologically—from Wyatt to Frost—how poets' letters throw light on poets' work. Between...

Pax Britannica: the Climax of an Empire James Morris (Faber

50s) Imperial sunset J. ENOCH POWELL, MP Critics of Empire Bernard Porter (Macmillan 70s) I was 'recently talking to the sixth form of a gramtriar school about defence. I...

ROBERT SKIDELSKY The Commonwealth Experience Nicholas Man- sergh (Weidenfeld and Nicolson 70s) Most empires have been lost on the battle- field. Our own period is no exception....

AUBERON WAUGH Collected Essays Graham Greene (Bodley 42s) 'A man should be judged by his enmities as well as by his friendships,' writes Graham Greene, in a brief author's note...

DAVID WATT Warburg 50s) I shall be able to tell my grandchildren that I saw the House un-American Activities Com- mittee in action—but only just. I wandered into the wrong...

RONALD HINGLEY The appearance of the second and last volume of Solzhenitsyn's Cancer Ward now makes it possible for the English-speaking reader to judge the novel as a whole....

A hundred years on

HILARY SPURLING One of the sterner virtues of the Royal Court is the zeal with which, regardless of sloth, in- gratitude or simple peevishness, it pursues the Abbey Theatre's...

Creme de la creme PENELOPE IIOUSTON The Runaway (Academy Three. `C1') Since her first appearance, occupying a large part of an issue of the New Yorker back in 1961, Miss Jean...

A place to show

ARCHITECTURE STEPHEN GARDINER R. M. Schindler was an American architect Who died in 1953. He was an admirer and con- timporary of Frank Lloyd Wright, and his work, arty and...

Eight per cent and all that MONEY

NICHOLAS DAVENPORT To say that the jump in Bank rate from 7 per cent to 8 per cent last Thursday came as a shock to the City is putting it mildly. The usual com- ment, which...

CUSTOS The February gold figures, which showed the best increase before loan repayments since July 1962, provided a much-needed fillip for the gilt-edged market. Final...

PORTFOLIO JOHN BULL I am slightly more optimistic about the course of equity prices than my distinguished col- league, Mr Nicholas Davenport. And I found considerable...

A letter to General Gowon

Two for the doghouse ,

Sir: I was amused by Kenneth Allsop's account (28 February) of his brush with a gamekeeper —but not surprised. As Mr Allsop implies, the country paths, even when they are rights...

Sir: The statement by Lord Chalfont, Minister of State at the Foreign and Commonwealth Office, at the Luxembourg meeting of the Western European Union last month—that Britain...

Sir: Mr Bruce-Gardyne writes (28 February) that 'at the height

of the original Brussels nego- tiations in 1961-62 business contacts between the British and French delegations simply did not exist.' This is `simply' completely at variance...

Sir: . Mr Robert Hughes in reviewing Black and White: A Portrait of Aubrey Beardsley. (24 January) talks about Sigmund Freud 'who could not read Italian' as having erroneously...

Sir: John Rowan Wilson (28 February) seems to have got himself a little confused by the abor- tion statistics, which may help to .account for the unbalanced tone of his article....

The freedom to die

tion (Letters, 28 February) of my remarks about Kingsley Martin's views on the Rhineland crisis of 1936 (21 February). All I can say is that I think my memory is not at fault,...

Sir: I was greatly pleased to learn from Mr Bill Grundy's press column (28 February) of the fifty-first birthday of Dom Aelred Wat- kin. Mr Grundy mentioned that he didn't have...

Sir: The entertaining correspondence prompted by my letter (24 January),

might perhaps be summed up thus: 'We are none of us infallible, neither the oldest nor the youngest of us'—not to mention the dictionaries of quotations!

Sir: I have been commissioned to write a book commemorating the thirtieth anniver . sary of the outbreak of the Second World War. I am anxious to collect material from as wide...

AFTERTHOUGIIT A. L. ROWSE Nor any motion of footfall Beneath ceiling or rafter by day: All laughter, all merriment over, The ghosts have their way. A house alone with its...

From the 'Spectator', 6 March 1869 — General Grant's address, on assuming office as President on Thursday . . . is certainly short and good. He takes the oath to the...

COMPETITION Competitors are invited to use the following ten words, in the order given, to construct part of the script for either a play, musical, panto- mime or film; up to...

Trevor Grove reports: Competitors were invited to compose an octet, using rhymes taken from a well-known poem, on one of the following sub- jects: thoughts on the motorway box;...