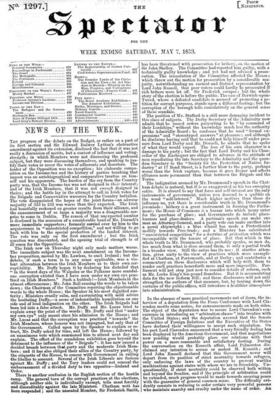 THE progress of the debate on the Budget, or rather on a part of its first section and Sir Edward Bulwer Lytton's obstructive amendment against its extension, disclosed the fact...

In the absence of more practical movements out of doors,

the in- terview of a deputation from the Peace Conference with Lord Cla- rendon merits some notice, for announcements made on both sides. The object of the deputation was to...

The flourishing state of trade eontinues to be the theme

of jubi- lation on all hands, except with a few melancholy prophets whose attention is concentrated upon " the next crash." Those pleasant companions are never wanting. Somehow...

THE Quasi, Prince Albert, and the Royal children, left Buckingham

Palace on Saturday at two o'clock, and arrived at Osborne about six. Her Majesty has driven and walked in the grounds at Osborne every day this week. On Wednesday, Prince...

Lord Palmerston received, on Monday, a deputation from the citizens of London who advocate the plans of Mr. Charles Pearson for the esta- blishment of a City railway terminus in...

At the election for Taunton, on Tuesday, Sir John W. Ramsden, the Liberal candidate, carried the poll by the meagre majority of 7—Rams- den, 373 ; Badcock, 366. It is remarked...

IRELAND. At a meeting of the Tralee Board of Guardians,

held last week, it was resolved, by a majority of 14 to 6, to support the extension of the Incoine- tax to Ireland. Mr. James O'Connell, the brother of the late Daniel...

Mr. Gladstone has replied to a memorial from the Manchester Commer- cial Association in support of the Budget- " I have read this memorial, proceeding from a body of such...

FRANCE.—Although the health of the Empress is stated to be much im- proved, all festivities and gayeties at the Tuileries have been suspended. The Emperor takes no part in...

SATURDAY. The House of Commons was crowded last night in every part to wit- ness the sequel of the Duffy - affair; personality always being more at- tractive than business....

The papers of the morning announce the death of the

Marchioness of Dalhousie at sea. She left Calcutta for England, in the Monarch, on the 2d January ; the ship arrived off Land's-End on Monday ; and it appears that Lady...

The decision of the Harwich Election Committee is that Mr.

Wad- dington is duly elected, but that Mr. Peacocke is not duly elected ; and further, that, in the event of his being returned, Mr. Peaeocke had agreed to pay Mr. Attwood a...

STOCK EXCHANGE, FRIDAY AFTERNOON. The present week has borne a striking resemblance to its predecessor with regard to the value of Government Securities and the trifling fluc-...

A crowded meeting was held last night at the London

Tavern, Lord Dudley Stuart in the chair, to present Louis Kossuth with a copy of the works of Shakspere, which had been purchased with the pennies of 10,000 working men. The...

Dublin, 4th May 1853. SIR -I have just heard that it is the intention of the Government to offer a very shabby bribe to the priests, with a view to secure their support for the...

By an English version of tree RivitTe dans le Dos,

(one of Ravers amusing trifles,) Mr. Mathews has increased the list of those infinitesimal doses of dramatic fun which he now administers in such rapid succession. Be it...

On Monday last the long-expected opera of La .Fronde, composed by M. Niedermeyer and written by MM. Jules Lacroix and Auguste Magnet, saw the light at the Academie Imperiale. As...

The Philharmonic concert of Monday last was the most brilliant

and successful of the season. The excellence of the bill of fare was shown by the influx of guests ; there was not a vacant seat at the banquet, and numbers were unable to gain...

The author of the "Lays of the Scottish Cavaliers" has received a cordial welcome at Willis's Rooms, where he has set up a rostrum to dis- course on Poetry and Dramatic...

Covent Garden Operahouse was crowded to overflowing on Thursday night,

and the audience were in a state of extraordinary excitement' during . the whole performance. Yet the opera was only the well-worn L uerezta Borgia, with Grisi, Mario, and...

When Robertson in his History of Charles the Fifth said, in reference to the captivity of Francis the First at Madrid, "The Duchess of Alen- eon, the King's sister, whom Charles...

THE REFUGEES AND THE GOVERNMENT. Turi asylum open in this country, both by law and practice, to po- litical exiles of every tone of opinion, is too honourable to Eng- land, too...

THE Morning Chronicle announces, with statistical figures in proof, that the Derby party is breaking up by the loss of its " most prudent and patriotic" members : and the fact...

Tnn debate on the first resolution of the Budget, after draggin g on for four evenings with no novelty of argument and no great speech, was closed for the amendment by Mr....

FAITH, argues Lord Grey, must be kept with the convicts, in whose cells a promise has been hung up that they shall have tickets of leave as the reward of good conduct ; and...

Liverpool, 5th May 1853. Sts—Your article on "The Civil Service Superannuation Fund," in your paper of the 30th April,—advocating that the deduction now made from official...

THE FRONTIER LANDS OF THE CHRISTIAN AND THE TURK.. THE Turkish provinces which lie on either side of the Danube, and the Austrian territories of Croatia and Solavonia, are the...

THE REGISTRARSHIP OF OXFORD UNIVERSITY. Oxford, 2d May 1853. SIR —The letter of " M." in the last Spectator gives a most inaccurate account of the election of an Oxford...

AN ART STUDENT IN MUNICH. * MARY Howrrr's daughter passed a

twelvemonth in Munich as a student of painting ; and these volumes give an account of her daily life and what she saw. Compiled, or more properly ex- tracted, from family...

WHITELY ON THE RISE, PROGRESS, AND CORRUPTIONS OF CHRISTIANITY. * THE

first volume of the eighth edition of the Encyclopedia Bri- tannica is-now before us, with its various dissertations. Dugald Stewart's Metaphysical and Ethical Philosophy, left...

This novel exhibits very considerable powers, neither uncultivated nor unadapted to fiction. The author has some knowledge of life ; he has reflected on his own nature and the...

Boors. Memorials and Correspondence of Charles James Fox. Edited by the Right Honourable Lord John Russell, M.P. Volumes I. and IL History of Scotland from the Revolution to...

THE ROYAL ACADEMY EXHIBITION. Criticism on an exhibition such as that of the Royal Academy, com- prising nearly fifteen hundred works in various departments of art, cannot be...

The notion of an amateur exhibition has proved a decided hit. In this its third year, the number of exhibitors is more than twice that of the last, and the number of works is...

ADMIRALTY, April 22.—Vice-Admiral of the White B. Hodgson has been appointed to receive a pension of 150/. a year, as provided in her Majesty'a order in Council of the 25th June...

On the 24th March, at the residence of her father, Major-General Staveley, C.B., Commanding Poonah division of the army, Mrs. Anson, Wife of Captain Talavera Vernon Anson, R.N.,...