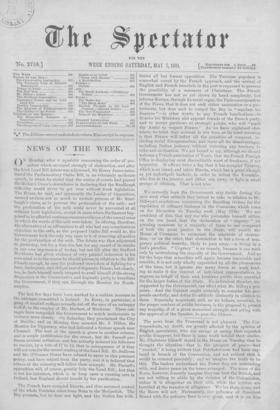 O N Monday, after a squabble concerning the order of pro- cedure which savoured strongly of obstruction, and after the Irish Land Bill debate was adjourned, Sir Henry ;Fames...

We earnestly hope the Government may decide daring the next

week what attitude they intend to take in relation to Mr. Dillwyn's resolutions concerning the Standing Orders for the regulation of ordinary business in the Commons, which come...

The French have occupied Biserta, and thus assumed control of

the whole Tunisian coast from Bona to the M.edierdah. The Bay protests, but lie does not fight, and the Sultan has with- drawn all but formal opposition. The Tunisian populace...

The news from the Transvaal is not pleasant. The Cor-

respondents, no doubt, are greatly affected by the opinion of English speculators, who are savage at seeing their expected profits disappear, but there is some truth behind...

9 ** The Editors cannot mulertaketo return Manuscript in any case.

The last few days have been marked by a sudden

increase in the outrages committed in Ireland. In Kerry, in particular, a gang of masked ruffians actually out off the ears of an unhappy bailiff, in the employ of Mr. Herbert,...

The dinner of the Royal Academy, held this day week,

was a. sufficiently brilliant oue, Sir Frederick Leighton, as usual, showing a singular tact and judgment in his choice of speakers, and the skill with which he drew them out....

Sir Stafford Northcote made a speech at Ketteriug on Wed-

nesday, the leading characteristic of which was decided. pugnacity in a party sense. It was the speech of a man, who wished to be thought a fighting general, and not a Fabian,...

Two very singular and, we suspect, true stories have been

published about the inquiry into the death of Sultan Abdul Aziz, now going on in Constantinople. One is that an order was extracted from Sultan. Murad, which will, of course,...

A story has been circulated accusing the Home Secretary of

betraying Austrian Socialists residing in England to their own; Government, who have arrested persons in Vienna on English information, Sir William Harcourt was questioned...

Alexander III. has not yet resolved to issue the decree,

signed by his predecessor, calling a Consultative Parliament. He has, however, agreed to a reform which may prove important,—the consolidation of the Ministry into a Cabinet,...

The best speech made on the Irish Land Bill since

its introduction by Mr. Gladstone was Mr. Shaw-Lefevre's, on Monday night. Ho replied to a fairly average speech by Mr. W. H. Smith,—the First Lord of the Admiralty under the...

On Thursday the chief speakers were Mr. O'Connor Power,. Lord

Mr. Carlyle has been the subject of three interesting letters

to the Times during the past week. In one published on Wednes- day, Professor Tyndall bears witness to Carlyle's very great interest in physical science, especially in relation...

The rise in Consols, duo partly to the large purchases

by the Treasury, partly to the abundance of money, but chiefly to the slackness of trade, has become a marked financial fact. Consols on Thursday touched 102} for money, being...

Yesterday week, Mr. Gladstone made a very striking speech in

reply to Mr. Richard, who very nearly defeated the Govern- ment—though in a very thin house—on a resolution declarisg that the unauthorised action of our foreign representatives...

Another speech of singular grace was that of Matthew Arnold,

whom Sir Frederick Leighton described as "a most happy poet, and a critic not to be surpassed, if ho is equalled, iu the subtle felicities of his insight, a writer in whom a...

The thanks of both Houses of Parliament were on Thursday

voted to the soldiers engaged iu the Afghan war. The war was a bad one, immoral in object, reckless in management ; but that was no demerit or business of the soldiers. They did...

The House of Commons has abolished distraint for the rent

of agricultural holdings. That is to say, no Bill has been passed, but the House, on Tuesday, resolved, after an important debate, without a division, that distraint should be...

THE CONSERVATIVE LEADERSHIP. T HE Standard has opened its columns to a discussion on • the Leadership of the Tory party, which is obviously in- tended to favour the election of...

THE PURITANIC VIEW OF HISTORIC MONUMENTS.

W E confess we receive the mass of reports, rumours, official utterances, and telegrams from and about Tunis with the strongest feeling of incredulity. Why the Foreign Office...

"I F there is any serious resistance to the Attorney-General's new Bill,—and we write before the veering weathercock which alone indicates Sir Stafford Northcote's policy on the...

M R. PARNELL is enough to ruin any cause, oven one so good as that of the reform of Irish tenure. The only justification for his agitation,—an agitation which in many of its...

T T has often been remarked that the Bishops show to greater advantage in Convocation than the Clergy, They are not, as a body, bettor men than the members of the Lower House ;...

T O those who, like ourselves, have constantly insisted on the fundamental distinction between England and Ire- land in the matter of landholding, there is a peculiar interest...

A T the Royal Academy last Saturday, Mr. Gladstone spoke of his obligation to Millais, for having "enormously improved his chance of immortality," by painting him with the skill...

T HE libel case of " Sievers v. Adelmann," decided this week before Mr. Justice Denman, is a typical illustration of one of the most perplexing of English social phenomena, the...

ELEMENTARY TEACHERS AS INSPECTORS. (To THE EDITOR OF THE " SPECTATOR."] Sin, — iLrill you kindly allow me space to reply to the letter of " H. II," in your last week's...

THE CLOTHES GF THE PERIOD.

1-17 0 the well-constituted male mind, the pleasure that women derive from their clothes is an agreeable subject of con- templation. The man who " never knows how one is dressed...

RUSKIN AS AN ARTIST.

[To THE E.DITOR OF TDB " SHILOTATOR. S1R,—ln the Spectator of April 23rd, I ventured to question the appropriateness of calling Mr. W. M. Hunt a " Vermont• Ruskin." I added,...

THE PROSPECTS OF FARM LABOURERS.

[To TEE EDITOR OF THE 6PEOTATOECI S1R,—In your interesting article on " The Reduction of the Rural Population," there is a statement to which you will, I am sure, allow me to...

[To TES EDITOR OF THE "SPECTATOR;') SII1,7-It is always with a certain surprise that I perceive the tacit assumption of so many of our opponents,—that all humane persons are...

[TO ME EDITOR OF THE .4 SPECTATOR."] SIRS I see in yours of April 30th that Mr. C. F. Pollock attributes the .origin of the now familiar phrase, " Peace with honour" to Mr....

[TO TEE EDITOR OF THE SPECT,LTOR:1 SIR,—Will you kindly allow me to correct an inaccuracy in the sentences commencing " The Rector of Sandringham," in your impression of...

CARLYLE. 'Thum went a Titan, but a Titan tossed With wild tumultuous hearings in thy breast, And fancy-fevered, and cool judgment lost In mighty maelstroms of divine unrest....

THE ROYAL ACADEMY. [PREFATORY NOTICE]. Tli E present year's exhibition of the Royal Academy, which was opened to the public ou Monday last, seems to afford an excellent...

THE BODEN SEE.* Yttom the author of Wanderings in War Time it was natural to expect a charming work, in which instruction and amusement should be blended in the correctest...

THE BLACK ROBE.* Tun mysterious appearance of the book before

us, with its black binding, and wavy, white lines traversing the cover from top to bottom, so as to outline (though somewhat indistinctly) the lower half of a long, flowing...

ENGLISH THOUGHT IN THE LAST CENTURY,* [SEOOND NOTIOE1 TBERE is

in all history, perhaps, no more striking example of the way in which "impulses" from a very few men or women may spread and grow to great issues, than we may find in tracing—as...

THE Magazines are not very good this month. There are plenty . of excellent papers in them, with much well-written argument and many facts ; but their subjects are rather dull,...

THE NEW PLAYGROUND.* Ma. Kxox's travels iu Algeria, as may

be guesSed from the title, throw only a very indirect light on the difficulties lately risen between the French Government and the Bey of Tunis ; yet, if the North of Africa be...

The Laws Relating to Religious Liberty and Public Worship. By

John Larkin, Esq. (Hodder and Stoughton.)—It is a pity that the author of this book should have obscured good intentions and real knowledge by the exaggerated rhetoric which he...

The Irrigation Works of India, and their Financial Results. By Robert R. Buckley. (W. IL Allen and Co.)—Mr. Buckley speaks with authority, holding, as he does, a high place in...

The Treasury of Modern Anecdote. Edited, with Notes and Intro-

duction by W. Davenport Adams. (Tho Edinburgh Publishing Com- pany.)---The compiler claims for his collection the merits of being " new " and " true." His anecdotes are modern,...

Birmingham.)—We have just received this volume which we welcome as the first of what will bo, we hope, the records. of many prosperous years. It contains the speech delivered by...

Co.)—We have sometimes wondered that there have not been more guides and helps to Greek verse composition, which still holds a place in our public schools and universities. We...

Children at Jerusalem : a Sketch of Modern Life in

Syria. By Mrs. Holman Hunt. (Ward, Lock, and Co.)—The families of two brothers travel together through part of the Holy Land. One sot of cousins is enthusiastic ; one set is...