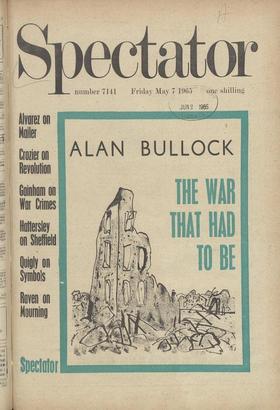 Alvarez on Mailer Crozier on Revolution MAN on War Crimes

AFTER SIX MONTHS of preparation, the Govern.. ment's White Paper on steel (not the Nationalisation Bill, which has not yet been begun) was brought to the Commons for approval....

TIROBABLY Mr. Ian Smith will not declare ra UDI. Certainly this country must do everything it can to prevent him. His Government's recent White Paper on the economic aspects of...

Once More Unto the Breach . . . ? BRIAN CROZIER writes: The temptation to assume the worst about American motives is becoming alarmingly widespread, and the past week's...

ISRAEL The Young- Ones •

DREW MIDDLETON writes from Jerusalem: The tourists who crowd the hotels here play, unconsciously, a significant role. Rather like the effete easterners who ventured across the...

Whenever journalists get together to award each other prizes as 'Best Female TV Critic of the Year' and so on, they should in all gratitude in- clude a new category for...

Arthur's off to Singapore, Tony to Mauritius, Walker any landing ground that appears propitious. Denis Healey, flying round, Hardly ever comes to ground. Michael Stewart up and...

Decision Time for Harold By ALAN WATKINS T ODAY is an appropriate time to peer over Mr. Harold Wilson's shoulder as he flips through his Boy Scout diary. After skipping the...

Steel The calculations have been made to the point of

tedium. Desmond and Woodrow, Woodrow and Desinond,,keep appearing and disappearing until their faces blur into one composite amiable Cheshire cat. Mr. Mikardo injects an honest...

The great question for Banbury today is how far it is to expand. Under the South-East Study it might have gone up to 80,000, from its existing 20,000. That plan is now in...

Though the new postal rates become effective at the end of next week, and though the Post Office is being criticised—rightly—for various inefficiencies, the picture is not...

T ttosE who watch the educational programmes on Sunday morning on independent television will have observed that the Spectator has taken to advertising itself on the air. The...

The seven-a-side tournament at Twickenham is always the best of endings to the season. And there is little doubt that this year's London Scot. tish seven was the best team since...

The Royal Academy's Summer Exhibition seemed to me a very customary hodge-podge, for all the publicised efforts to up-date it. Things of genuine quality or originality are...

The War That Had To Be By ALAN BULLOCK T liE war in Europe came to an end twenty years ago. After nearly six years of fighting and intense effort, the Germans had been de-...

An End to the Trials

From SARAH GAINHAM BONN T HERE is no crime called genocide on any statute book except, understandably, in Israel. Where statements of intent to punish such a crime exist, they...

By SIMON•RAVEN ALL I desire for. my own burial,' wrote Lord Chesterfield with characteristic aplomb, 'is not to be buried alive.' But survivors, it seems, are more defnanding;...

Working on the Railways By MALCOLM RVTHERFORD rTIHE minister is, Of course, talking about one I idea of British Rail; the men talk about 'the railways.' I put forward a...

SIR,—Nobody will be surprised to find Quoodle in support of American policy in Vietnam, but I hope nobody will be impressed by the curious argument he uses to dispose of the...

SIR,—The Bill has interesting, perhaps unthought-of possibilities- on the Celtic

fringe. For instance, my daughters were taught a patriotic song for the St. David's Day celebrations at their Cardiff primary school: it calls on the men of Glamorgan to 'rise...

is with some temerity that I presume to find fault with the observations on racial matters of Dr. J. C. Carothers, whose work in the field of psychology in Africa for the WHO...

SIR,—I am not concerned to discuss Mr. Warbey's views (though

I am much more in agreement with them than with those of your correspondent Mr. P. J. Honey); but I 'am dismayed by one argument that Mr. Honey uses: Mr. Warbey indicates that...

SIR,—Since Quoodle seems to have been perplexed by the Virginia drink laws, he might consider the casuistry of the Sunday drinking laws in Washing- ton. One of the best (or most...

SIR,—We should like to have an opportunity of bringing to the attention of your readers the forma- tion of a Society for Anglo-Chinese Understanding. At the present time China...

SIR,—You printed on April 23 an article setting forth exclusively the British slant on the current Gibraltar dispute. In common justice, without any commitment of any kind, it...

SIR,—Any general comment on Christopher Booker's ill-informed observations on the Sunday Times in your issue of April 23 must be made. if they judge it worth while, by those of...

seems to believe that the racial problem is a scientific one, and that sufficient knowledge of facts is needed for its solu- tion. But it is mainly a question of aesthetics and...

SIR,—I am writing a biography of the late Lady Cunard and should be extremely grateful for any information about her. I am particularly anxious to see any unpublished letters to...

SIR,—In his review of Collected Stories by Frank Sargeson, in your issue of April 23, Mr. Norman Levine says that he remembered reading the 'centre piece' of the volume, a story...

SIR.—I have read with interest Mr. Peter W. S. Johnson's letter (in your issue of April 30) on Mr. Macleod's article. He may be right in interpreting the present international...

SIR,—It is clear from Mr. Ian Hamilton's review of The Faber Book of Twentieth Century Verse (April 23) that his standards are not those of Mr. David Wright and myself. That is...

THEATRE Ghost at the Wedding

The Dybhuk. (Habimah Theatre at the Aldwych.) D EPARTED spirits have their place in western literature—from Aeschylus to Mailer—but that place is usually a peripheral one:...

PHE. first warm weather comes. Blackbirds start their wolf whistles. Before we quite know what's afoot fioriture and fanaticism are blossoming madly at Covent Garden. On the...

Le AcH year the British art critics ' prize goes to a youngish artist with a reasonable body of work awaiting the fuller recognition it de- serves. Paolozzi was one early, far...

nERIIAPS because they represent the master r race, their heads

are much too large for their bodies; handsome heads, none the less, in a rugged super - masculine way, with thick crisp hair and strong eyebrows. Their eyes are dark pools,...

By A. ALVAREZ N ORMAN MAILER'S last , book, a collection of essays and occasional pieces, was called The Presidential Papers. It was offered as a kind of corrective to the late...

MILLIONAIRES and geniuses fascinate me. I was once friendly with an American millionaire who had been persuaded to dispose of most of his fortune in his own lifetime and who...

I have given away the last roses. The days are drained of light like roses blowing too late, without the strength for colour, dead in a crib of dry leaves. Take it that I...

Before the Colours Fade. By Fred Ayer. (Cassell, 25s.) GENERALS are often queer fish, and among the queerest of them was the late General George S. Patton; in this portrait of...

ENDS OF THE EARTH

Nolan in Africa FLUSHED and hot with joy at the sight of Mount Kilimanjaro, flushed and hot with discomfiture at being addressed as `Bwana,' the Australian painter Sidney Nolan...

A Draught of Fishes. By F. D. Ommanney. (Longmans, 36s.) DR. OMMANNEY is, in the first place, I suppose, an academic, a professional ichthyologist who has divided his time...

The Loved One and Vile Bodies. By Evelyn Waugh. (Chapman and 'Hall, 21s. each.) THESE reprints are presented with beautiful austerity. The Loved One is an exquisitely pro-...

Money : 2. International By NICHOLAS DAVENPORT IN one respect international money is like 'domestic money, which I discussed last week— there is not enough of it. As Ml'....

By CUSTOS Mitt, reasons I gave last week for the market I rise in equities have been substantiated by another forward move. In fact, last Friday, the last day of the Stock...

By LOTHBURY M R. J. W. GARTON, chairman of Hoffman Manufacturing and also of Brown Bayley Steels, reports favourably for 1964 on both his companies. Hoffman, manufacturers of...

By MARY HOLLAND `Most people like it be- cause there's something rather more manly about dogs than most charities, don't you think?' Thus an official explaining what attracts...

All in the Mind By LESLIE ADRIAN HAVE you ever wondered what would happen if you filled in the coupon for one of those 'Have a better memory' advertisements? A reader has...

The Name on the Knife-Blade By ROY HA TERSIF Y. Ml' O N the day that 1 was born my grandmother wept to think that she should have a grand- child who would never see a green...

SOLUTION TO CROSSWORD No.1168