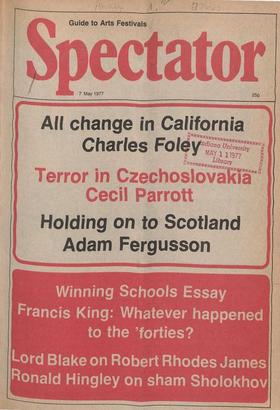 Walter Bagehot drew a distinction between the ` dignified' and the 'efficient' parts of the constitution. r , he Queen i s 'dignified'; Parliament, in theory at leas t , is...

Prelude to Stage Three John Grigg Between now and the end of the summer the Government will be playing for a Stage Three incomes policy, upon which its own credibility and the...

Hy the time YOU-read these words, Western civilisat ion will have been rocked to its fo undations by the showing of the first of the d eeply-historic Frost-Nixon interviews. A...

Any port in a storm Auberon Waugh The greatest impertinence of Americans and others writing about the sad state of Britain is in the assumption that we can't see these things...

Richard West Writing on Merthyr Tydfil in 1962,1 quoted a Labour councillor, Tal Lloyd, as saying: 'It is quite inconceivable that any other party could win power here during...

Patrick Cosgrave All British education is governed by the Butler Education Act of 1944. The last occasion on which there was widespread debate about whether a new Act was...

The Tories at Perth

Adam Fergusson Unless Mrs Thatcher is very careful, a Conservative victory at a general election within the next twelve months will present her with one particular nightmare:...

First time out Jeffrey Bernard It's highly unlikely that any of you will hav e noticed the 2.15 last Monday Â°t Wolverhampton, the Lichfield Maidt Fillies' Stakes, run over...

Ross Hutchison 'Education' is always an emotive issue, probably because everyone undergoes over a decade of it in his lifetime. Also, as Bill Gold said in the Washington Post:...

The summit of Summits Nicholas Davenport The flag poles are up again in the Mall â this time bigger than ever because not Â°r ie but six heads of state from the OECD are...

Sir: Leo Abse (9 April) sees Christianity and Judaism as Son and Father locked in necessary combat; the Son makes his necessary rebellion, and the Father carries out his...

Sir: We understand that the National Executive Committee of the .Labour Party is about to launch an appeal to pay for the unsuccessful attempt by two left-wing officers of...

Sir: Mr Beverley Nichols (9 April) writes of a hostess giving 'great offence' to a young American by asking him if he would care to 'wash his hands', and receiving the...

Sir: I applaud your journal's recent, very timely criticism of the weight of repres' sive legislation now burdening our once' free nation. At this time we might con sider the...

Sir: I have followed Christopher Booker's recent series of articles faithfully week Â° Y week and to begin with I found them int er ; esting and controversial. But I now feel...

Duncan Fallowell The Film Addict's Archive edited by Philip Oakes (Elm Tree Books Â£5.95) To most people, including Philip Oakes, this means Hollywood. True, there is a nod to...

Francis King Inside the Forties Derek Stanford ( Sidgwick and Jackson Â£6.95) T his book of literary reminiscences, c overing the years 1937-1957, poses the same kind of...

Peter Ackroyd How to Save Your Own Life Erica Jong (Secker and Warburg 0.90) The cover may stop you reading this book; there is a photograph of something quite large and...

Benny. Green The Black Girl in search of God Bernard Shaw (Penguin Â£1.50) Something of Myself Rudyard KiPling (Penguin 70p) Ingrained habit impels me to keep an eye on the...

Sebastian Faulks Squaring Off, Mailer v Baldwin W. J. Weatherby (Robson Books Â£4.50) The first time I came across the term 'squaring off' was in an essay by Tom Wolfe in...

Rodney Milnes How do British festivals survive in thes e troubled times? The very troubles attract those for whom uper-priced continent al jamborees for the Euro-elite are way...

Mushy John McEwen If your knowledge is a 'mush of literature and life', as T.S. Eliot put it, then Ron Kitaj's oil paintings (Marlborough till 4 June) are for you. The longer...

Parrot cries Richard Ingranns Not content with delivering his weighty report on television, about which I assume little will ever be done, Lord Annan went on the box last week...

Match rules David Levy The last of the Candidates' quarter-finals has finally ended with Spassky's victory in the second, two-game minf-match. Spassky will now meet Portisch...