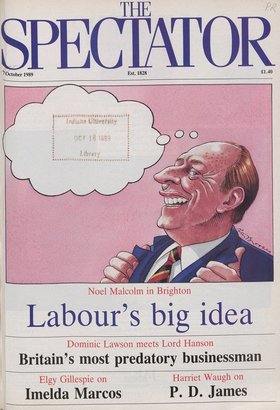 PO L IT I C S Mr Kinnock takes a walk on the supply-side NOEL MALCOLM Brighton There were moments during Neil Kin- nock's address to the Labour Party Conference when I...

_ANOT EANOTHER VOICE How endism may yet give way to the new wave of Indyism AUBERON WAUGH This week, the Sunday Times officially announced the end of 'endism', the silly name...

AFGHANISTAN'S FORGOTTEN AGONY John Simpson sees civilians die in a war which the world's press has dropped THE explosion shook evetything, even the car. Then a cloud of dust...

THE GREAT DEBT SCARE Ambrose Evans-Pritchard explains why America is not overborrowed Washington AS THE American economy rolls on into its 82nd month of unbroken growth, the...

A BRITISH FBI? Michael Trend gets a chief constable's views on the creation of a national police force WITH the recent failure of the investigation into falsified crime...

GRANDFATHER' S NOT TO BLAME

GRANDFATHER' S NOT TO BLAME Young delinquents tell Olivia Nicolson why they committed their crimes AFTER we had put away our weekly game of Scruples, the six young...

Bumping and boring MY flight to Washington was heavily overbooked, and the distinguished economic commentator William Keegan was offered £150 to get off the aircraft. Sound...

[Mutual backscratching is all right...]

CITY AND SUBURBAN i __ I'll scratch your bank if you'll scratch mine, but it's the pound that itches CHRISTOPHER FILDES Mutual backscratching is all right between consenting...

Submarine mushroom WHAT a fierce high-stake poker game over the Channel Tunnel, with all three players - the company, the contractors, the banks - bidding up on busted flushes!...

Down the river IN Washington I found the annual fudging of the budget in full swing - helped on by Barrons, the business journal, which reports a novel notion for curing the...

Terrible television Sir: I am taken aback by Paul Johnson's beliefs (The media, 2 September) that American television 'is rich in both quality and variety', and that the...

I Sir. I was most interested in Andrew Kenny's article on immigration and race. One passage, however, cannot go unreproved. The USA is not governed by a white man from northern...

Sir: Andrew Kenny will remain confused until he can learn not to attempt to compare unlike with unlike! There is no legitimate correspondence between the historic migrations of...

LE TTER S Culture, not colour Sir: As an immigrant myself (ethnic Indi- an) I was interested in Andrew Kenny's 'Right of passage' (30 September). However, there are several...

Mao, Hollis etc Sir: A. S. Hollis's attack on my book The Truth About Hollis (Letters, 30 September) repeating word for word in its central part his letter to the Independent...

Paper chase Sir: Your amazement at the cultural achievements of a society which attributes 'value to bits of paper' (Diary, 16 September) was shared by Juan de Ulloa, a Spanish...

Proud author Sir: I was cheered by Auberon Waugh's comments on my book A Vain Conceit (Another voice, 30 September), although he declined to mention either my name or its...

Women beware women Robert O'Brien It is scarcely possible to walk onto a railway platform, let alone a beach, without being aware of one of the major literary phenomena of our...

Down with the middlebrows Nicholas Lezard A VAIN CONCEIT by D. J. Taylor Bloonzsbury, £4. 99 pp.'135 7lhere are two bitterly antagonistic camps in the marketplace for English...

EMINENT VICTORIANS by A. N. Wilson

An attack of the vapours Mark Archer EMINENT VICTORIANS by A. N. Wilson BBC Books, 1 15 pp. 240 Eminent Victorians brings together in published form the six studies of...

Case record No, Mr Poet, Joy is not my name. I am three years old already, Qi is my name. A pretty eastern word, you think, suggesting Lotus, Plum Blossom, Heavenly Blessing,...

THE KALEVALA by Elias Lonnroth, translated by Keith Bosley

A masterpiece from the Finns Eric Christiansen THE KALEVALA by Elias Lonnroth, translated by Keith Bosley OUP, £6.99, pp. 679 Six-hundred and sixty-six pages of verse, at...

Music Power and potency Peter Phillips The sharper-eyed amongst you, who have been to see the interminable Lawrence of Arabia, will have noticed that the background music was...

High life Chickening out Taki Athens I Just about now the weather is changing, I and by the time I've had a long swim, shower, drink and lunch on board, it begins to get...

Television Laundry money Wendy Cope W hy are there so few Englishmen in it? What is a bond? Why am I enjoying it so much? These are a few of the questions raised by Capital...

New life Over the hill Zenga Longmore I really didn't want to celebrate my birthday last Wednesday. Who could blame me? Never again can I say, with any vestige of truth, that...

Low life Seasoned with salt Jeffrey Bernard One of the penalties you have to pay for hanging out in bars is having to listen to unsolicited nonsense. I was having a quiet...