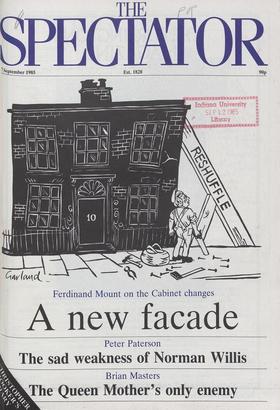 Shuffling the pack reshuffle before the next election,' the Prime Minister commented, after making bigger changes to the Government than expected. Mr Brittan was moved from the...

SAUNDERS Lewis, founder of Cym- deithas yr laith Gymraeg, the Welsh Lan- guage Society, died last week. One never likes to suggest that a man has lived in vain. But a circular...

TRYING TO COMMUNICATE T hose who argue that Mrs Thatcher never changes her mind, or even her `style', in any way, should compare the most important reshuffle of her first term...

ALL three parties seem suddenly to have woken up to the fact that there are votes in conservation. The Conservatives have re- sponded by publishing Greening the Tories: new...

The Cabinet reshuffle: who's a pretty boy then? FERDINAND MOUNT A t about six o'clock on Monday night, a sound of relief was audible from the majority of Tory MPs â not a...

CHRISTOPHER BOOKER T his first week in September is always a melancholy moment in the English year, as we stand poised uneasily between the fading of summer and the cricket...

How we can yet win the hearts and minds of the young AUBERON WAUGH D evils in the splendidly antiquated make-up `stone' of the Daily Telegraph mercifully removed a chunk of Mr...

Ronald Payne on the dirt beneath the whitewash of the Tricot report SECRET services are never more informa- tive than when they are being investigated, as the French one is,...

WILLIS IS THE WORST

Peter Paterson on the failure of the TUC general secretary Blackpool AS I was saying last week just before. Jimmy Knapp and I were so rudely interrupted by a healthy and quite...

An extraordinary story, originally circu- lated by a Siberian paper, has obtained currency in England about a colony of English gold-diggers who are working gold-mines on...

A FUTURE FOR ROBOTS

Gerda Cohen on hi - tech and low employment in Telford IT COULD be a temple, gleaming white and windowless; all round, the scruffy grasses of high summer. Hitachi make video...

, SPECTAT THE OR Subscribe NOW and save up to 25%

on the retail price (equivalent to 3 months FREE) Subscription rates are being held at the old price for a limited period only. Take advantage of this special offer now! I...

AN EXTRAVAGANCE OF CURIOSITY

Travellers: A profile of Patrick Leigh Fermor, soldier, writer and architect PATRICK Leigh Fermor is something of a phenomendn â the kind of man that English society tips out...

HELL IN THE CLASSROOM

Emma Gilbey finds that as the new term begins pay is the least of her problems LIKE Ursula in D. H. Lawrence's The Rainbow I approached my first year's teaching with...

The Spectator is establishing an annual prize in memory of Shiva Naipaul, details of which are still to be worked out, though it will be awarded to a young writer. In addition...

THE WAR OF ATTRITION

The press: Paul Johnson predicts eventual victory for Maxwell YOU can read what you like into the settlement Robert Maxwell reached with the NGA on Sunday. To me it looks...

TO have carried his bag for the formidable Kenneth Keith (Lord Keith, nowadays) is as hard a schooling as a merchant banker could have. It should stand John MacGre- gor in good...

The Savoy board: glittering prizes and sharp knives CHRISTOPHER FILDES W ar to the knife and fork flares up next week. On Tuesday the Savoy group will bring out sparkling...

I COLLECT phrases which mean their opposite, such as 'it gives me no pleasure to say this', or 'it hurts me more than it hurts you', and this week spotted a City favourite. Poor...

HYPOCRISY makes the City go round, but I am sorry to see it find a victim in Michael Hawkes, chairman of Kleinwort Benson. He has evidently done penance at the Bank of England...

Sir: I liked Peregrine Worsthorne's account of Vanessa Lawson (24 August) who was as wonderful as he says, and I was touched by his nostalgia about the many wonderful sights he...

Sir: Your reviewer's very flattering re- marks (Books, 10 August) on Ronald Spector's Eagle Against the Sun failed to comment on the complete absence of any map. This oversight...

Sir: I would like to record my admiration for Dhiren Bhagat's harrowing article in this week's issue (`Auschwitz for the chick- ens', 31 August). Here is one at least who though...

Sir: The photographer who was killed during the attack on Greenpeace's Rain- bow Warrior was not Portuguese but Dutch. He was a descendant of one of the numerous Portuguese...

Sir: Andrew Brown, when describing humorous rivalry as 'revanchist national- ism' (Baltic tears and vodka', 17 August), made a common mistake with British people. That is to...

No movers and shakers

Sir: Timothy Garton Ash writes (`God- damn Nato and goddamn Tories', 10 Au- gust): of . . that most select elite, the American readers of the Spectator'. I know a dozen...

Sir: Of course A. N. Wilson (Letters, 24 August) was aware that the legend of the Assumption was extant long before 1950: Mr Robinson was being silly-clever. It goes back 15...

Sir: As a onetime long-suffering tube traveller, I feel compelled to speak out in British Rail's defence (Letters, 31 August). I have for some time now been an ardent admirer....

Sir: Your critic, Alexander Chancellor, praises the only example I saw of David Frost's ITV series Twenty Years On (Tele- vision, 31 August). The programme filled whatever there...

A topography of menace, a map of fear

The Slave of Dark

Woe is the life that harbours The poetry of warp: Better to light a candle Than to be the slave of dark. Gabriel Fitzmaurice

I wonder what happened to him?

Francis King THE PENGUIN NEW WRITING 1940-1950 edited by John Lehmann and Roy Fuller Penguin, Â£4.95 P rovided that he managed not to get killed, seriously wounded or...

Not minding his Fs and Qs

Antony Lambton GENTLEMEN IN ENGLAND by A.N. Wilson Hamish Hamilton, f9.95 N omenclature is an art which Mr A.N. Wilson has not mastered, as in his Victo- rian pastiche he has...

Peter Levi KEITH DOUGLAS: A PROSE MISCELLANY edited by Desmond Graham Carcanet f8.95 P oets often go on improving, like mecl - â¢ lars which 'are never ripe until they be...

No peace for the wicket

Cinema Rambo (`15', selected cinemas) The sneering torso Peter Ackroyd P erhaps the most notable, if under- employed, faculty of Sylvester Stallone is his voice; on the few...

The Drummers of Kodo (Queen Elizabeth Hall till 15 September) Japanese heartbeat Duncan Fallowell he Kodo show from Japan is very picturesque and frantic â even hysterical...

Aunt Dan and Lemon (Royal Court) Noises Off (Savoy) Moral defeat Christopher Edwards T his new piece, by the American writer and actor Wallace Shawn, is one in a series of...

Romantic revival Peter Phillips M ahler once said of his opus one Das Klagende Lied that it was 'the first work in which I found myself as Mahler'. Never was a truer word...

Paris revisited Taki P apa Hemingway knew a thing or two when he wrote: 'Paris is like a mistress who does not grow old and always has other lovers.' Unlike people who live in...

Desperate measures Alice Thomas Ellis D riving over the moors to Penmaen- mawr we noted that the animals seemed even more suicidal than usual. We passed a sheep gazing...

Hell on earth Jeffrey Bernard T he other day I read that some lunatic in the West Country is to open a pub that will not be selling alcoholic drinks. Up until now I have...

Green shades P. J. Kavanagh I t was always a doomed endeavour, in this green darkness, to try to watch county cricket on Cheltenham College ground; so we watched the hail...

Circulation- Jaspistos I n Competition No. 1385 you were asked for a list of titles (subtitles also invited) of `articles which a magazine would have to run if it did not...

Out to Graz Raymond Keene T he prevailing atmosphere of the Fide Congress at Graz which finished on 31 August, a few days before the start of the world championship, was one...

THINGS are different in the country, you have to face up to it. I have been in darkest Cumberland, was taken to a party where I asked for ice (none being offered natch) and was...

You are invited to write a light-hearted 12-line poem with the following rhyme- scheme: shine, right, sight, mine, appalled, same, name, called, confounded, together, neither,...