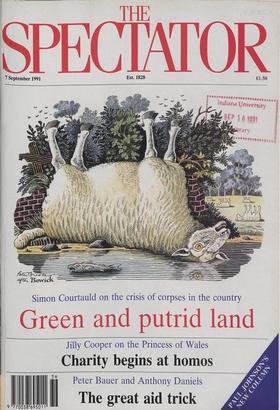 John Bull Jr W estland and IBM were awarded a £15 billion contract to build the Merlin helicopter for the Navy instead of an all-British consortium. Polls put the Con-...

The dead hand of Mr Hurd guiding us from one compromise to another NOEL MALCOLM I f Mr Major thinks that foreign policy wins votes, he should think again. War and the threat...

JILLY COOPER A Chairman of Bisley Cricket Club, my husband Leo imports a side to play against the village. A thrilling match in even more thrilling hot weather ends in vic-...

The Bernard Shaw syndrome that the East does not need CHARLES MOORE arold Nicolson worked under General Smuts at the Versailles peace conference, trying to sort out the ruins...

Simon Courtauld reveals a new terror in the country, one which the Government doesn't care about A BULLDOZER was filling a farmer's car- case pit in Scotland the other day when...

The reports on the distress in Russia grow no better. The peasants in the huge Valley of the Volga are said to be literally starving, in all the Polish provinces the scarcity is...

NO AID AT ALL

Peter Bauer and Anthony Daniels on the folly of subsidising the Soviet Union NOW that Russia has finally joined the Third World by accepting the Third World's only unifying...

THEATRE OF THE ABSURD

SNATCH OF THE BALTIC

Thomas Braun remembers an overworked diplomat who took liberties with the Athanasian Creed THE Foreign Office between the wars could only afford one diplomat for all three...

William Cash reviews the arguments against birth control held by the Catholic Church WHEN Terry Wogan recently asked Madonna about her religion on his televi- sion show, she...

Is your journey really necessary, professor? PAUL JOHNSON M ore and more young people are try- ing to get into universities. The trend is hailed with approval as though, in an...

WHILE we wait for reform, I have a practical suggestion. Tom King is lumber- ing forward with his proposals to spend less money on soldiers and more on tanks. For the surviving...

WE LIVE on an island, said Aneurin Bevan, made of coal and surrounded by fish, so it must have taken an organising genius to create a shortage both of fish and of coal. The...

Staying away from work by decree time to scrap bank holidays it's CHRISTOPHER FILDES h, good. No more bank holidays until Christmas, so we can get some work done. How the...

Why only one TEA?

PLAIN living and high thinking are the staples of the Institute for Economic Affairs. Long notorious for its lunches, it made up for them by the quality of its food for thought....

A reader received the following letter: Dear Sir, Thank you for your recent enquiry for a Distributorship. Since I have been with herbalife my eyes have been opened to the vast...

Sir: Asfa-Wossen Asserate (Paternalist prince' 17 August) is an engaging and enlightened man, and Ethiopia might well benefit from his federal views and liberal principles if by...

Sir: It would be a brave doctor who diag- nosed syphilis on the basis of an 'infallible' Wasserman reaction (Letters, 24 August). On the evidence produced, the case is far from...

Recipe for chaos Sir: Sir Alfred Sherman (Letters, 31 August) accuses your leader-writer of 'prej- udice and insufficient knowledge' not only for recommending that the borders...

Sir: It is understandable that Joanna Coles, smarting under the

harassment of Conduc- tor Baptie and the British Transport Police during her journey from Edinburgh to Kings Cross should have overlooked anoth- er aspect of this remarkable...

Sir: In reply to Stephen Williams's com- plaint (24 August) about my article on Jocelyn Stevens and English Heritage, I freely confess I was wrong about there being a...

Sir: I sympathised greatly with Joanna Coles' account of her difficulties with the pig-headed British Rail ticket collector ('Don't let the train. . .' 31 August). But however...

Sir: I have read The Spectator with great pleasure for over 50 years and have recent- ly had a new cause for gratitude; my increasing nausea over the crudity and 'yobbishness'...

Sir: How irksome for Mr Parris (Diary, 10 August) to have his social life complicated by the ancient Christian custom of regard- ing all human beings as being of equal worth!...

Sir: As a regular reader of The Spectator I never cease to be amazed at the informa- tion I pick up each week. Now I learn from Robert Fox's 'The invasion of Europe' (i7 August)...

Sir: Please don't pull the plug on the Forbes-Churchill correspondence.

I can't think why you don't give him (Forbes) a column. It need only run to one sentence. R M Stockdale Thorpe Taney Hall, Lincolnshire

Sir: In her account of the Edinburgh Book Festival Anne Smith (24 August) said I went unprepared and gave the same talk as four years ago. Untrue. In fact I talked in detail...

Sir: Martyn Harris is mistaken in stating (Arts, 31 August) that I was one of the sharp young Oxbridge men hired by Grace Wyndham Goldie for Panorama and Tonight. In fact I was...

Sir: Cannot you invite Messrs Churchill and Forbes to your

office, provide them with pistols for two and coffee for one, and leave them to get on with it? This would clear some space in your correspondence columns for letters of more...

Smiler with a knife

Bert by fits and starts

Mr Hunt in the Library with a gun

The hours of the afternoon were unselfconsciously eventful, absorbing, funny. Calmly, quietly, Oliver found peace in service. If the children were rude he bore it. He bore...

Who are all these people?

Francis King DAUGHTERS OF ALBION by A. N. Wilson Sinclair-Stevenson, £14.95, pp. 277 T he title of the third volume of A. N. Wilson's novel sequence The Lampitt Pap- ers...

John Whitworth MAO II by Don DeLillo Jonathan Cape, £14.99, pp. 241 T his is a smart book written in short sentences. Often without verbs. Like advertising. Brita is a...

I commend this orphan child to my dead father, my grandparents. She was so endearing, so lovable. Help her against the dark, the loneliness of death. Help her into heaven. She...

Andro Linklater THE TAX INSPECTOR by Peter Carey Faber & Faber, £14.99, pp, 279 I n the old days, when kindly scientists were still trying to develop 'smart' weapons as the...

Museums History in the raw H enry VIII may have lived some way from Rome and Florence, but he was no hick. Any idea that his kingdom was an impoverished estate on the edge of...

Close My Eyes ('18', Lumiere) Get the message Harriet Waugh J ungle Fever is the black director Spike Lee's fifth film. He wrote, directed and produced it. The plot is that...

From Gainsborough to Constable: the Emergence of Naturalism in British Painting 1750-1810 (Gainsborough's House, Sudbury, till 13 October) True to nature John Henshall I f...

Withered daffodils Martyn Harris T ony Hancock wrote his own memorial on a radio episode of Hancock's Half Hour in 1964: 'The best you can expect is a few daffodils in a...

Not so wise guy Taki Athens Wen the good Marx, Groucho, ran up against a bore he'd quip that he never forgot a face, 'but in your case I think I'll make an exception'. I...

Man of business Zenga Longmore U ncle Bisi has not exactly been in my good books of late. For example, look at the way he commandeered Olumba to package up sacks of...

Alexandra's Hot-Rocks I TRY for variety in these pages. From a gastronomic point of view, this is a flawed aim, but it is not an entirely worthless one. Nevertheless, there are...

Lloyds Latts Raymond Keene A few weeks ago I eulogised the games of 19-year-old Latvian grandmaster Alexei Shirov. Since then Shirov has amply justified the accolade by a...

I SCOTCH WHISKY n Competition No. 1692 you were in- vited to present a curriculum vitae from an eager, entirely unsuitable candidate for a responsible post. One of the few good...

A first prize of 120 and two further prizes of £10 (or, for UK solvers, a copy of Chambers English Dictionary -- ring the word 'Dictionary') for the first three correct...

From a standing tart Frank Keating IT was with a joyous quiver of nostalgia that I read and then re-read last week's exquisite misprint in the middle of this reg- ular little...

Dear Mary. . . F. F. Spennithome, Yorks. A. One unusual present — which is not available in toy shops — is a device called a nightingale. This imitative instrument, as used in...