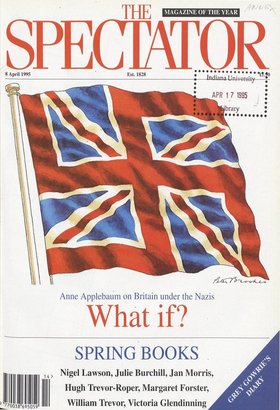 Drinking companion Sir: I don't know who Philip Hensher is, fortunately, but as a colleague I did know Louis MacNeice fairly well during the last quarter of his life (Books,...

Over by Christmas? Sir: Spending so long in a small room at Pentonville with the lock on the outside of the door and only two other men for company has affected the memory of...

On our knees Sir: This is a trivial point, but it's begun to irritate. It's odd that, with so many Catholics working at The Spectator, one minor error continues to be...

Imagine his surprise Sir: I recently wrote a letter to your journal expressing the fear that having received a walloping from some very strong-armed Jews, some of your...

L E T T E R S Auntie knows best Sir: It's 18 months since a national newspaper printed a picture of Brian Redhead with the headline 'Does this man cost Britain £50 billion a...

Black and White Sir: My poor powers are quite inadequate to describe my pleasure at reading Auberon Waugh's account of being blackballed from White's Club (Another voicej...

Sir: Auberon Waugh is our greatest satirist I and wit, and worthy of comparison with Jonathan Swift. It is impossible to imagine a more civilised and amusing member of any club...

Old Buffers Sir: With reference to Lord Bethell's article about the Foreign Office's aversion to British subjects wearing foreign medals ('Gong but not forgotten', 18 March) I...

Family quarrel Sir: Since rigorous debate of the issues of our time and open and free inquiry are at the heart of the Acton Institute's purpose, I welcome the spirited piece in...

And finally. . . Sir: Paul Johnson (And another thing, 25 March) could have ended quoting Max Beerbohm: 'You will find my last words in the blue folder on my desk.' Timothy...

Unread, but not forgotten

But did she ever like it? Julie Burchill ANAIS NIN: A BIOGRAPHY by Deirdre Bair Bloomsbury, £20, pp. 592 If the great Mark Bego took only 98 pages to tell the definitive...

Don't like father, can't like son Hugh Trevor-Roper TREASON IN THE BLOOD: ST JOHN PHILBY, KIM PHILBY AND THE SPY CASE OF THE CENTURY by Anthony Cave Brown Robert Hale, £25,...

Cinema Dumb and Dumber (12, Selected cinemas) Too thick to come out Mark Steyn Last week, in the Grand Banks Fish War, just as all right-thinking Britons were about to...

Opera Life with an Idiot (London Coliseum) Never to be repeated Charles Osborne A representative of the management apologized to the audience at the London Coliseum for the...

Television An unbiased view Ian Hislop Readers in Scotland should now avert their eyes. I am going to devote the whole of this column to a televised interview with the Prime...

High life Money in the wrong hands Taki About six months ago I wrote about living under a roof owned by the Cadogan estate. It was a long complaint, but a fair one. I say...

Long life A word from Mr Manners Nigel Nicolson Rudeness is easier to define than politeness. Rudeness is jumping queues, ringing off without apology when you get a wrong...

Low life My days with the Krays Jeffrey Bernard I wasn't asked to Ronnie Kray's funeral a Week ago and I suppose that was because I don't possess one of those box-shaped...

Office life Never go on holiday Holly Budd I recently spent a few days with a friend at a modest hotel overlooking the harbour at Villefranche. At least, it's modest in...

SPECTATOR SPORT A marriage of inconvenience Frank Keating BBC TELEVISION had 35 cameras covering London's annual joggers' junket between Greenwich and the Mall on Sunday -and...