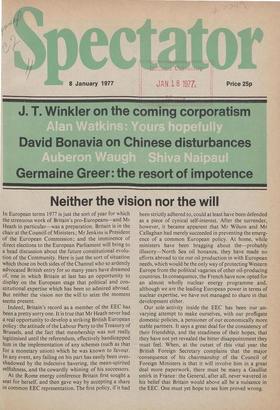 Neither the vision nor the will

In European terms 1977 is just the sort of year for which the strenuous work of Britain's pro-Europeans—and Mr Heath in particular—was a preparation. Britain is in the chair at...

AND PRISON CONDITIONS IN SOUTH AFRICA On August 1st 1976, The Observer published an article by a 35-year old Briton, Brian Price, who had escaped from a South African prison...

The British people ambled back to work after a delightful holiday of almost two weeks to mark the festive season. Mr Jack Jones hoped that 1977, begun in this leisurely way,...

Mr Callaghan's lost battle John Grigg With the turn of the year Mr Callaghan has ensured that he will not share with Lord Goderich the unhappy distinction of having only one...

'Mae Buzby yn gofyn: Ydych chi'n caely gorau o'ch teleffon ?' Welsh is reputedly a beautiful language, but did those who have struggled for its survival ever foresee the use 1 0...

Joining the Welfare conger Auberon Waugh The day before the Post Office closed for its long winter recess, I went to buy my weekly supply of postage stamps in Taunton. This is...

Journey to the Kenyan Highlands

Shiva Naipaul The taxi which had been arranged for me by the District Commissioner was already more than fifteen minutes late. However, I did not worry unduly. 'You will get...

Taki Theodoracopulos The cheerful flunkey behind the desk in the foyer of the Libyan consulate in Athens bids me wait for his Excellency the Second Assistant to his Excellency...

David Bonavia Hong Kong It has been well said about the Chinese that they have a high boiling point but an underlying hysteria. As anyone knows who has watched a riot in Hong...

Failure of a housing estate

Hugh Macpherson The Gorbals of Glasgow now rests securely in the black museum of inner-city areas Which includes such places as Harlem or the Crater in Aden. It never had the...

Alan Watkins The word 'hopefully,' as used in 'Hopefully, the trains will be running,' came in for a good deal of abuse last year. It was denounced, in the New Statesman and...

Luckily he batted, While all the world was still; And

lads like him thought not of me That day by Bredon Hill. Conversely, absolute adverbs, enclosed by commas, can occur in the middle of the sentence: The potential bonth-thrower,...

Christopher Booker As we enter the closing years of the decade, one of the most curious facts about public discussion these days is the remarkable diminution in cosmic doom...

Patient punter Jeffrey Bernard I shall never go racing again on a Bank Holiday and don't you. Kempton Park on Boxing Day was awful and that was in spite of two really great...

Keynes and the coming corporatism

J. T. Winkler The operational Keynesianism, the Keynesianism that is written about in political weeklies as opposed to academic journals, consists of a small set of...

Back to the equity market Nicholas Davenport The old year has had a bad press in the City but it could have been worse. Certainly it Was disappointing that the FT index of...

Sovereignty and the EEC

Sir: While still an anti-Marketeer, I dissociate myself from those on the right who are prepared to enter into an alliance with the far left to get us out. That cure is worse...

Sir: Bill Brandt takes fine photographs, there's no doubt about that—they are certainly the ones that stick in the memory from the days of Picture Post and Lilliput. But John...

Sir: Spectator's Notebook (4 December) rightly devoted much space to Mrs That cher's intention not to `have a statutory incomes policy again.' Incomes policies have indeed...

Sir: The article (27 November) by Mr Adam Fergusson headed Can the Union survive? seems to me to be quite worthless as a statement on Scottish Nationalism. The very heading 'Can...

Old and young S ir: I have been wondering when someone

in the Labour Party was going to notice the progressive irony of longer live-ability with shorter work-ability—and now Douglas Jay has satisfied me ( 11 December). As things are...

What is wrong Sir : May I congratulate you on your

e ditorial Ship of Fools (I I December). But, While I agree with you entirely, may I say that you have left the subject unfinished. You have not made any positive suggestions a...

Teaching Sir: Those who are seriously concerned about deteriorating standards

in our education, should be greatly indebted to John Terraine for his incisive and devastating assessment of the mumbo-jumbo of the 'progressive doctrine' (11 December). For...

if the book by David Pryce-Jones about Unity M itford, which he has not read, can be `all that' inaccurate (Letters, 4 December). In defence of the reaction from Lord Lambton...

Barbarians at the gates David Holden Persona Non Grata Jorge Edwards (Bodley Head £6.95) . .. the barbarians will arrive today; and they are bored by eloquence and public...

Bryan Robertson Vorticism and Abstract Art in the First Machine Age Volume Two: Synthesis and Decline Richard Cork (Gordon Fraser 07.00) In my teens in the 'forties, I grew up...

Edward de Bono The Raven and the Writing Desk Francis Huxley (Thames and Hudson £3.95) Book reviewers are a particularly arrogant and fat-headed breed who assume that an...

Benny Green Pavilions by the Sea Tom Laughton (Chatto and Windus £4.95) Having read his autobiography, my sympathies go out to Tom Laughton even though I am quite sure he is...

Richard Williams A Jazz Retrospect Max Harrison (David and Charles £5.95) N0 art suffers more at the hands of its critics t han jazz. For almost half a century its , a n,...

Nigel Cross Behind the Eyes: Collected Poems and Translations Edgell Rickword (Carcanet £3.25) No flash, no self-advertisement, no jokes— almost no style characterised the...

BENJAMIN BRITTEN OPERAS in good condition (not 'Peter Grimes'). Write Spectator Box No. 724. SCOTLAND. Any volumes of the Royal Commission on Ancient Monuments, or books on...

The resort of impotence Germaine Greer In mid February, Federico Fellini arrives in London for the dubbing of the English language version of his new film, Casanova. The sort...

Back to life Ted Whitehead Wild Oats (Aldwych) The Royal Shakespeare Company's latest revival provided one of the rare occasions in recent weeks when I have watched an...

Oxford feast John McEwen It is difficult to imagine that there will be a richer feast of art viewable in one building in 1977 than the Schwitters, Gorky, Naylor sequence at...

Rescue raid Clancy Sigal victory at Entebbe (Warner 4) Raid on Entebbe (Odeons) Time was, if a disaster occurred anywhere in t he world, newspapers sent their most clashin g...