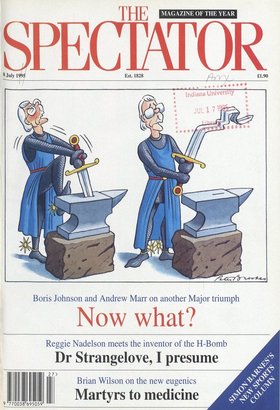 Mind your language JESSICA MITFORD wrote to me the other day about moles. Well, not about moles, really, but about the rudest word in the English language. She tells me that...

... THAT IS FOR EVER ENGLAND

. . . THAT IS FOR EVER ENGLAND Leo McKinstry examines the hypocrisy and confusion surrounding the issue of sport and patriotism THIs WEEK we have witnessed the emergence of a...

Authoritative denial Sir: The wildly defamatory piece you published by Paul Johnson (And another thing, 1 July) is wrong in its most elementary facts. Johnson attacks 'Jonathan...

[Sir: I read your article with great sympathy...]

Sir: I read your article with great sympathy. I I was very moved by your feeling of tenderness towards your new daughter. In the 12 years that I ran my refuge in Chiswick I was...

[Sir: Dominic Lawson raises the issue of the...]

Sir: Dominic Lawson raises the issue of the termination of foetuses with major chromosomal abnormalities. It was a courageous article, and I doubt many parents would have the...

L E T T E R S Get a life Sir: We hope that the views expressed in the article which described the birth of your daughter ('All you need is life', 17 June) will make some of us...

[Sir: I write to congratulate you on the bold...]

Sir: I write to congratulate you on the bold I decision you and your wife took not to have the amniocentesis or other invasive tests for Down's syndrome. You have a human being...

Basta pasta Sir: Nigella Lawson (Restaurant, 17 June) in discussing antipasta (sic) asks, 'Where does one start?' Usually with the antipasto, which is taken before the pasto or...

Heseltine and Mosley Sir: Charles Moore's comparison of Michael Heseltine with Oswald Mosley is less than just (Another voice, 1 July). The former was never as lucid as the...

Now you know Sir: In his piece on the salerooms of 10 June, Alistair McAlpine spells our international airline with a 'u'. QANTAS is completely non-u. It is an acronym for...

We are not mean

We are not mean Sir: Anne Applebaum ('Elevating meanness to a principle', 24 June) has written a silly piece. Whilst not sharing the meanness or the dyslexic morality of her...

What a man Sir: I have just returned from West Africa and, catching up with back editions of The Spectator, I read the article by Zulikat Wuraola Abiola ('Let my father go', 10...

Takes all sorts Sir: I must take issue with Air Chief Marshal Armitage (rtd) (Letters, 24 June). As a practising homosexual with an abiding delight in portly mature men, I have...

Out-shoed Sir: Please tell Paul Johnson (And another thing, 10 June) that his friend Carla Powell, who is also a friend of mine, does not have the largest collection of shoes...

Very small point Sir: I should like to correct Christopher Fildes (City and suburban, 17 June) on a very small point. There are no midges, killer or otherwise, in Halifax. We...

From a Sonnet History of Modern English Poetry Big Phil and Uncle John We studied hard. We tried to get to grips With Modernism, but we couldn't hack it. A beastly, leftist,...

Was it sad when that great ship went down?

Was it sad when that great ship went down? Nigel Spivey THE RIDDLE OF THE TITANIC by Robin Gardiner and Dan van der Vat Weidenfeld, £20, pp. 312 'A perfect example of the...

An Aga Saga with a difference

An Aga Saga with a difference John Oaksey THRONE OF GOLD by Anne Edwards HarperColilins, £20, pp. 346 Hlow can the divinely descended Imam of 15 million Ismaili Muslims...

Maximum violence and distress D. J. Taylor ARCHANGEL by Paul Watkins Faber, £14.99, pp. 283 A t 31 - an age when most young writers are still crowing over their first advance...

October This deep valley can fill up to the brim, My sloping field be shoreline to cloud, A sea that faith enough could walk across. The sun, that old con-artist, One eyebrow...

Sale rooms Better than real life Alistair McAlpine The tail end of July is not usually the most exciting time for the sale rooms; most dealers prefer the sunshine to the...

Gardens Good in a bed Ursula Buchan There is nothing more immutable than the mutability of fashion. Even we ploddy old gardeners will pursue anything that we are told is the...

High life Total glow Taki Eollowing the royal wedding, I was standing next to Spyro Niarchos and my hosts, King Constantine and Robert Miller, when the marquee at Hampton...

*OIV - - - Imperative cooking: coherence is the word I CONTRAST TWO experiences. At an expensive London restaurant recently I was given a grilled bass. Just as I was about to...

SPECTATOR SPORT Tennis madness Simon Barnes I WANTED to drop on my knees and say, 'Thank God I never had any talent.' Picture them: endless lines of children, swinging their...