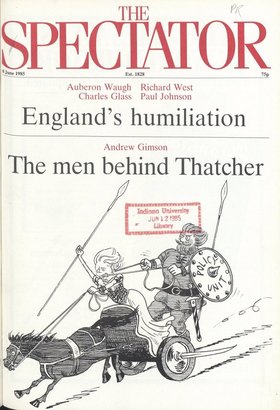 NICARAGUAN AID T1 IF Observer o0 12 Mlay came upr with a shock-horror replort based ol at purloined FC() document: 'Britain working in secret to block aid to Nicaragua.' We...

GEORGE-BROWN IT WAS splcndid of the Times to treat Lord George-Brown's death differently to d1Ny other paper, but it was also rather silly. I'll spienidour lay in the...

[The Government is playing a deep...]

THE SIKUS IN 'GENOCIDE WEEK'

BEFORE AND AFTER THE DELUGE

BEFORE AND AFTER THE DELUGE George Galloway on the cyclone in Bangladesh, whose victims were already officially non-existent TALL, elegantly moustachioed, Lieutenant General...

ENGLISHMEN ABROAD Charles Glass I on an English tradition of butchering foreigners Its lTolfnlln this, an' Toimny that, an' '( 'huck 'im out, the brute!' But it's '.Saviour...

Finger-lickin' bids GOOD heavens, what now --- the Winston-Salem Oliver'? TFhe most hid-for biscuit, on the move yet again, is passing into common ownership with Kentucky Fried...

Palumbo in brodo I I 1AVE been in Tuscany, that well-known branch office of Doughty Street, investigating reports of a plan for clearing a large area of Florence to erect a...

Derby winner ASQUITH should have thought of it. If you want to keep the backwoodsmen away from the crucial poll, try holding it on Derby Day. The cool and guileful Sir Nicholas...

Critique Sir: Your television critique is a disgrace to your paper. Surely from a TV columnist one expects informed criticism presented with wit and flair'? Richard Ingrams was...

Jekyll's snobbery Sir: I enjoyed Ferdinand Mount's appreciatilon of Gcrtrude Jekyll 'is a courageous WOmflaI .1and gardener extraordinary (Books, 25 May), but he carries...

I was at Pangbourne

I was at Pangbourne Sir: I don't know if your readers are allowed to complain about Jeffrey Bernard, or whether 'low life' is beyond criticism, but if we are, I have a...

LE TTER S Israel and guilt Sir: Worsthorre proudly calls himself a pro-serlite (Diary. 11 May): but with pro-semites like him, anti-sernites may be rather redundant. I Ms...

Music's golden age Sir: It is interesting to note that Noel Malcolm's remark in his radio review (25 May) that 'What is popularly thought of as the stone age of recording was...

_- CNTRCE P_ __I____ Let knights not pilgrims go to Rome COLIN WELCH Told of an underground passage which supposedly ran from Campion Hall to Keble, the great Spooner mildly...

The blast of romantic love Peter Levi THE PERFECT STRANGER by P. J. Kavanagh Fontanalb, f2.50) I do not understand how I missed TAe Perject Stranger when it camie out in...

Frozen Poem Out of the silence a sound somewhere between the white sky and white ground. Wind in the telephone wires rising and falling? A suffering hinge'? Or truck tyres...

THE NOONDAY SUN by Valerie Pakenham

A GLIMPSE OF SION'S GLORY by Isabel Colegate

A cousin in Tuscany Francis King A (GIAMPSI OF SION'S GLORY by Isabel Colegate litilifish Hamilton, IS.95 ThC I'l-St, III quality as iII precedence, of the th-ec skilfully...

The Dance of Death (Riverside Studios) The Glass Menagerie (Greenwich)

The Mastersingers of Nuremburg La cenerentola

Gardens On show in Chelsea Ursula Buchan Tlic Great Spring Show of the Royal Horticultural Socicty, or Che-^lsea its it il universally known, was once one of the carly...

Television Points of view Alexander Chancellor M rs Thatcher gave us the lead. We were not to blame the Italians, the Belgians or anybody else for the massacre at the...

Low life Busman's holiday Jeffrey Bernard Y et another silly week in what secns to he like a farce that has been running for 53 years. On Monday Norman revealed that he...

High life A woman scorned Taki Providence, Rhode Island Ti he more I think about it the more convince(I I amn that the name of Alexandra Isles will one day replace the...

I Kind hearts and crabs I HAVE been trying to give you this recipe since St Valentine's Day but to no avail as it always overran my allotted space, which I am unable to...

C I Hilaire THI S week's column conies from, the writing wounded. I went a couple of days ago to a Chincse restaurant in West London, only to be somewhat frustrated in my...