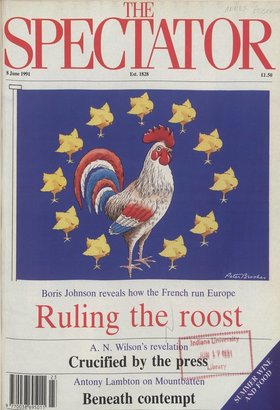 If symptoms persist. .. THE LILIES of the field, which neither toil nor spin, enjoy one decisive advantage: they photosynthesise. This means that they have only to put torth...

Inside information Sir: I was horrified to read in 'Portrait of the week' (25 May) that I 'stole up to £36 million from investors and bet it on horses.' According to...

French letter Sir: I have just been able to read the various contributions about Peter Mayle's recent book, Toujours Provence. My, my, the unenviable English trait of not...

L E T T E R S No alternative Sir: Leave it to that empurpled blow-hard Paul Johnson to send up the silliest hot-air balloon vet on Vanity Fair's much-quoted and much misquoted...

A skiver writes Sir: You have only to describe one of your contributors as 'unwell' for his column to become a hit in the West End, so I understand the temptation, but your...

Sir: In 1991 several highly and expensively I educated persons including a university professor, a psychotherapist and several others, after much research, are of opinion that...

The unvarnished truth Sir: Women are as horrible as men ('Not I men only', I June). We all know that, but in order not to incur the excruciatingly tedious wrath of the...

Turkish delights Sir: Accuracy is surely a desirable trait in Spectator diarists, even when, as seems to be the case with Nicholas Coleridge, family events have made them...

BLESS OUR SHIP by Richard Hough

Making a splash Antony Lambton BLESS OUR SHIP by Richard Hough Hodder & Stoughton, f 16.99, pp. 256 I have thought without cessation about the late Lord Mountbatten for the...

She Speaks the Words

She Speaks the Words At last she speaks the words he longed to hear: Lying in his grateful arms she sighs, 'I love you', and he looks into her eyes And sees, in each, the...

A slight case of Zenophilia? Hilary Corke SEEING THINGS by Seamus Heaney FabIear, £12. 99, t4. 99, pp. 11 3 T he pursuit of meaning through some of the later obscurities of...

That Thing It should be neat, funny: a spoof thriller laid lightly down at the end. It should be quick, kind: a child falling asleep on its father's shoulders. As it is, no one...

LEARNING TO LOOK by John Pope-Hennessy

The chimes at midnight, Sir John? David Ekserdjian LEARNING TO LOOK by John Pope-Hennessy Heinemann, £20, pp.336 I have never adopted a Proustian view of works of art, but...

Easy When You Know How

Easy When You Know How Whatever it was the solution was always To put a brave face on and try to be ready Remembering too that it might never happen Though clearly it had while...

SILENT COUP: THE REMOVAL OF RICHARD NIXON by Len Colodny and Robert Gettlin

Upsetting the apple pie Anthony Howard SILENT COUP: THE REMOVAL OF RICHARD NIXON by Len Colodny and Robert Gettlin Gollancz, £17.99, pp. 507 It is all but 17 years since...

The Silence of the Lambs

Cinema The Silence of the Lambs ('18', Odeon Haymarket) Liver and beans Gabriele Annan I had spent a whole weekend dreading the press show of 71ie Silence o 'the Lambs the...

Television On the Trot Martyn Harris Lots of people dislike Alan Bleasdale, but mostly for the wrong reasons. The Tory MP for Crosby once charged The Boys From the Blackstuff...

Low life Down the drain Jeffrey Bernard M urphys have been digging up Dean Street in an attempt to rccovcr a shovel an Irish navvy left there some weeks ago when they were...

SPECTATOR SPORT One-cap wonders Frank Keating ON THE way up to Headingley I thought of Andy Lloyd. It is hard not to on the first expectant day of any new Test series. The...