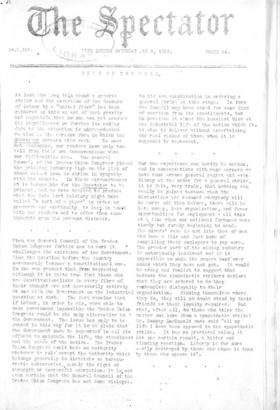 At last long talk about a general strike and the

assertion of the demands of Labour by U"united front" has been gathered up into an act of such gravity and magnitude that no one can yet measure - its . significance or foresee...

When the General Council of the Trades Union COngreSs forbids men

to work it challenges the existence of the Government. Thus the question before the country necessarily becomes a constitutional one. No . ohe can prevent that . ..from...

Our own experience , can hardly be unique, and in conversations

with wage earners we have come across general regret and even. dismay at the order for a general strike, It is felt, very truly, that nothing can really be gained because when...

We feel bound to oxp:-:nss our conviction that there was

much snse , in what 7/as said at that meetng. The particular speal:oril :lore not firetrnd but modolate men of the right wing. of Labour, and they contendod for what has nearly...

When the subsidy was originally offered we took the view

that as tho owners had not managed things well and there , ;as much symtpathy with the miners,it was justifiable to pay the subsidy and 4ive the country a breathing space to...

The fatal hour came when the . subsidy ceased and

the notices from the ownors took effect. Last Saturday the General Council of the . Trades Union Congress decided to order a general. strike to begin at midnight on Nonday, in...

The 'accusation about interfererk&e . with the freedom of the Pregs'seferred

to the'refqsal of .compositor 8 to print the DATU UAIL last Sunday night,.becausethey - Objoeted to e a leading 'article. There is of course not a word" to e said for this...

-Monday. Mr Baldwin confirmed., esehat had be'en suspected that-. in interpreting the meaning , of the Commissions - Repor':: in' the passages dep.' ing with wages,' no thought,...

The "Spectator" will be supplied at the rate of 2/6d

a month post free to anyone who applies to the Manager, 13, York Street, Covent Garden, London..C.2. London is astir aa.it has net : teen since those fateful days, of August,...

Published by the "Spectator" at their Offices, No.13. York Street,

Covent Garden,London, W.C.2. Saturday May 8th.1926. by means of the Gestetner . Duplicating Machine.