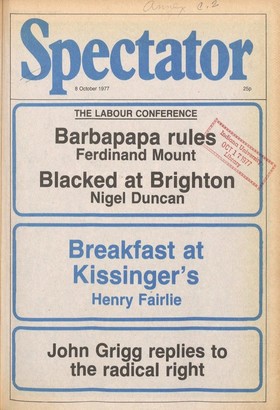 Now for the bad news

There is a delicious, and possibly even tragic, irony in a Socialist Chancellor of the Exchequer defining the economic recovery of the nation in terms of a stock market boom....

Barbapapa rules Ferdinand Mount Brighton 'One of the problems that face all of us is that we live in the world as it is and not as we would like it to be'. Ah yes, when you...

'What will happen, then?' In my experience nothing ever happens'. The exchange was, I think, betWeen Churchill and Balfour. It is the epigraph for all party conferences,...

Thoughts on a bad Pope Auberon Waugh Perhaps I will be accused of perversity for waiting until the week after Pope Paul's eightieth birthday to celebrate this melan choly...

Simon Winchester Lahore Just a few months ago, when Mr Bhutto was still Prime Minister of Pakistan, about six people were dying violently every day in pitched battles being...

Jillian Robertson Mr Morarji Desai, the austere Prime Minister of India who regards alcohol as an evil, has already started this week to impose prohibition on his country. But...

Richard West Johannesburg There is a craze just now in Johannesburg for the 'multi-racial' cultural event to demonstrate hostility to the apartheid system. Alas, the...

Henry Fairlie Washington Let us begin with a dull remak, because dull remarks are most likely to be true. No one in Washington, no one in New York, where I went last week,...

The family beside the sea

Marshall Mainwaring 'Did you say Bloody Mary mixed with Gin and Lemon?' enquired the barman at Brighton. 'I had to check. I've had stranger requests this week.' And indeed...

Nigel Duncan No sane jounalist could have other than mixed feelings about being banned from a party conference — a divine blessing or an outrageous blow to press freedom? It...

Tony Craig War had been declared in the tea-room at County Hall. As we munched cream cakes and poached eggs on toast the:campaigners painted a lurid picture of Soho's evil and...

A reply to the tough brigade

John Grigg In the correspondence columns lately there have been letters from several people to whom my form of Toryism is clearly abborrent. In particular, there was a long...

The promised land Nicholas Davenport Some hilarity was roused when Ambassador Peter Jay was filmed saying: 'On the White Cliffs of Dover Mr Callaghan told me he saw his role...

Sir: Mr Stanton should stick to his able arguments in support of Sir Osward Mosley rather than venture into 'medical and scientific' matters of which he is palpably ignorant. On...

Sir: I have read Forest madness by Humphrey Phelps in your issue of 17 September and I fear that it may have given readers the wrong impression of our management of the Forest...

The slippery pole Robert Blake The Conservatives: A History from their Origins to 1965 edited by Lord Butler (Allen and Unwin £7.50) The Tory Leaders: Their Struggle for Power...

Staying on the margin

Conor Cruise O'Brien Irish Neutrality and the USA T Ryle Dwyer. (Gill and Macmillan; Rowman and Littlefield £7.50) It was not because of partition that the de Valera government...

Kay Dick A Change of Perspective: The Letters of Virginia Woolf 1923-1928, ed. Nigel Nicolson and Joanne Trautmann (Hogarth Press, E12.50) They have now become as familiar to...

Peter Ackroyd Enemies Giles Gordon (Harvester Press £4.50) After much wasted effort it's now become apparent that 'modernism' is a concept which, like Burke's 'sublime' or...

Benny Green Thackeray, Prodigal Genius John Carey (Faber and Faber £6.95) I don't know if Mr Carey set out to write a contentious book, or, if he did, he realises quite how...

On the record Rodney Milnes All these opera sets are first recordings, even the ones that aren't. In the latter category is Kato Kabanova (Decca D51D 2, £8.50), which almost...

Tough guys Ted Whitehead Barbarians (Greenwich) tufff (Theatre Upatairs) The programme for Barrie Keeffe's Barbarians states that 'the language in this play may be offensive...

Artyfacts John McEwen No artist is more fawned upon by the public sector of the art world at the moment than lam Hamilton Finlay (Serpentine till 16 October). The Arts...

Mugg Richard Ingrams Last month I was lucky enough to see for the second time a television film made by Malcolm Muggeridge at L'Arche (The Ark), a community for the...

Jeffrey Bernard The Celebrity Bulletin put out by Durrants is a fascinating joke to me. it's not so much that I don't give a hoot to know that Lauren Bacall is residing at the...