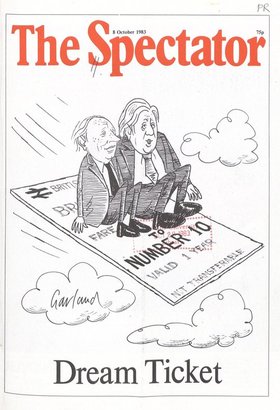 Political commentary The Nye straitjacket Charles Moore Brighton If it is applause you want for your speech at the Labour conference, there are a number of cues from which...

Another voice Turbulent priests Auberon Waugh It seems unlikely that I was alone in being upset by the angry, almost intemperate, tone of a letter in the Titnes last Saturday...

Hot autumn? Timothy Garton Ash Like rival football teams, the West German peace movement and government have plunged into the autumn season. So long as an agreement in Geneva...

The Great Speckled Bird Roy Kerridge (levelatnd, I(mlrs~ee Oii a hot, muggy ahterinoon in Tlen0 essec, just over a week ago, tour Stooped figures cCould be seeC walkilug in a...

News of the other World

News of the other World !!!!!r Richard West M oodhiridi.eW .Su ffb/k The News of the Wo-rld has revealed trhat a LJFO (Unidentifed Iying Object) has come to earth near...

[Sir: There is another way of looking at the...]

Abortion and Ireland I Sir: There is another way of looking at the Irish anti-abortion referendum besides that suggested by Olivia O'l. eary in her article 'Pyrrhic victory'...

Negritude Sir: I trust I am not alone in judging Mr Bridgland's failure to tell us which black African countries offer clandestine transit facilities to Unita inadequate and...

[Sir: Is it not desirable, when weighing the...]

Sir: Is it not desirable, whcn Weighing the I merits of post-harvest burllinlg against the nuisance and possible dangers which it causes, to distinguish between stubble, which...

Letters Peregrines Sir: How misinformed your critic John Jolliffe is in his review of Su Ingle's book, Secrets of the Coast (24 September), when he writes of the peregrine...

Centrepiece The same old thing Colin Welch Brighton C' old you please call up my car? Yes, the blue one at the back - the Rolls.' An elegant lady stood on the pavement...

Turgenev's Letters Selected, edited and translated by A. V. Knowles

Brilliant novel Harriet Waugh Act of Darkness Francis King (H-lutchinson £8.50) Francis King is one of our less prolific novelists and it is easy, because of the pauses in...

On the Continent Duncan Fallowell The Impossible Europeans Luigi Barzini (Weidenfeld and Nicolson £12.50) This is a collection of semi-political observations and generalities...

Television Sentimentalist Richard Ingrams It seems only yesterday that we were all glued to our tellies waiting to see if Wedgwood Benn could defeat Denis Healey for the...

Postscript Situation normal P.J. Kavanagh Watching (on TV) England play Denmiark at football - a match in which we began with timidity and never progressed beyond desperation...

High life Lifelines Taki sOr impulsiveness, recklessness and selfdestruction Brigitte Bardot was never a match for Ava Gardner. The life of the American star was and is more...